Today it is my pleasure to Welcome author Amy E. Reichert to HJ!

Hi Amy and welcome to HJ! We’re so excited to chat with you about your new release, The Optimist’s Guide to Letting Go! 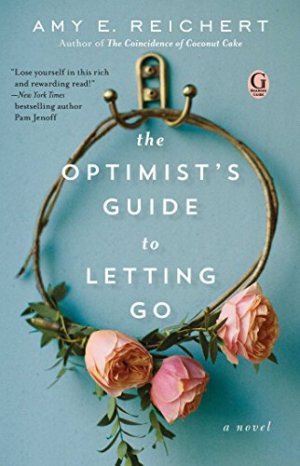 Three generations of women—Gina, her mother Lorraine, and her teenage daughter May—struggle to understand each other. Still mourning the loss of her dad from two years earlier, May starts rebelling. Lorraine is perpetually critical of Gina, and Gina buries it all under her list-making and optimism. When Lorraine has a stroke, Gina discovers her on the floor, calls the ambulance, and grabs any paperwork she might need for the hospital. When going through the papers, she discovers a family secret that Lorraine can’t explain things due to the stroke. Gina has to piece together the truth with the help of her sister.

It opens with a list, so I’m counting that as one line. Yes, I know I’m cheating.

Gina Zoberski crossed out number five, then turned to her first customer, muscle memory curving her lips into a smile. In minutes, her griddle sizzled with grilled cheese sandwiches as she lined up waxed paper and cardboard boats, cold air fluttering the paper as it mingled with the warm air inside Grilled G’s, her gourmet grilled cheese food truck.

Gina Zoberski became a widow two years ago and is the daughter of a domineering mom. She takes solace in obsessive list making and unfettered optimism. She’s just trying to make it from day to day.

May Zoberski is struggling to fit in at school where all her friends act like she should be moving on after losing her dad, but she can’t since her mom refuses to talk about him. Fun fact—my own teen daughter read some of May’s chapters to make sure she sounded like a teen. I passed the test.

Lorraine Zoberski has secrets—well, one big secret. She has spent her life playing a very specific role, but when the truth finally emerges, she has to deal with the choices she has made. I loved unpacking Lorraine’s journey from the woman she was, to the woman she became, to the woman she is in the end. I find her endlessly fascinating.

When Gina finds her mom on the floor, she has so many emotions in a short span of time.

Her mom was warm, that was something.
“Mom. Mom.” Gina gently slapped her face. No response. Gina’s breath quickened. She couldn’t panic. She could help her mom. She started making a list.

She didn’t know what to do after that. But it was a start. Something she could do to improve the situation. Gina had worried about finding her mother on the floor more than once. She was always curious what her reaction would be. Would she fall to pieces? Would she respond like a good daughter should and call for help? Or would she close the door, go to Starbucks, get a latte, then come back in a half hour. She was reassured, at least, that leaving for Starbucks had never crossed her mind.

“Okay, Mom. Let’s see how you’re doing here.”
She put a hand on Lorraine’s wrist and watched her chest rise and fall.
“You’re alive. You have a pulse and you’re breathing. That’s all good”
Somehow her mother’s pants had come down her hips, and she was in a puddle of water. Maybe she’d fallen in the spill and hit her head. Gina got a paper towel to wipe it up.
“Did you slip in some water? Is that what happened? I’ll get this tidied up right away.”
But when she set the paper towel on the liquid and watched it turn yellow, her nose finally picked up the distinctive scent.
Not water.

That mothers are complicated humans, just like us. They aren’t just cooks, housekeepers, enforcers, or caregivers, they have heartbreaks and dreams and maybe even a few secrets. I hope people are inspired to ask their moms the ten questions from the book—I know I’m glad I did.

I’m still in the dreaming and research stage for my next book. I have the edges of it, but nothing concrete—not even character names. I also have an idea for a novella that’s begging to be explored. Not sure what will come first.

To enter Giveaway: Please complete the Rafflecopter form and Post a comment to this Q: In the book, Gina and May like to riff on the classic grilled cheese and brownie. What’s your favorite way to jazz up a classic recipe!

Excerpt from The Optimist’s Guide to Letting Go:

Gina Zoberski crossed out number five, then turned to her first customer, muscle memory curving her lips into a smile. In min- utes, her griddle sizzled with grilled cheese sandwiches as she lined up waxed paper and cardboard boats, cold air fluttering the paper as it mingled with the warm air inside Grilled G’s, her gourmet grilled cheese food truck. She checked the sandwiches as they browned, pausing long enough to look at the text mes- sage from her food truck neighbor Monica, who ran On a Roll—serving an ever-changing menu of food on rolls, from sausages to grilled veggies.

Gina Zoberski wants to make it through one day without her fastidious mother, Lorraine, cataloguing all her faults, and her sullen teenage daughter, May, snubbing her. Too bad there’s no chance of that. Her relentlessly sunny disposition annoys them both, no matter how hard she tries. Instead, Gina finds order and comfort in obsessive list-making and her work at Grilled G’s, the gourmet grilled cheese food truck built by her late husband.

But when Lorraine suffers a sudden stroke, Gina stumbles upon a family secret Lorraine’s kept hidden for forty years. In the face of her mother’s failing health and her daughter’s rebellion, this optimist might find that piecing together the truth is the push she needs to let go…

AMY E. REICHERT, author of The Coincidence of Coconut Cake, Luck, Love & Lemon Pie, The Simplicity of Cider, and The Optimist’s Guide to Letting Go, loves to write stories that end well with characters you’d invite to dinner. A wife, mom, amateur chef, volunteer baby snuggler, and cider enthusiast, she earned her MA in English Literature and serves on her local library’s board of directors.
Website | Facebook | Twitter | Instagram | GoodReads |

« Spotlight & Giveaway: The Billionaire Werewolf’s Princess by Michele Hauf
REVIEW: One Night Only by J.C. Harroway »