Today it is my pleasure to Welcome romance author Sasha Cottman to HJ!

Today, Sasha Cottman will be unleashing edits from her book Letter from a Rake 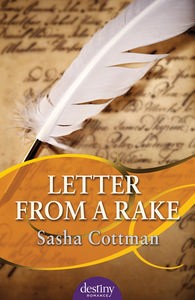 Letter from a Rake is a Regency Historical Romance about a heartbreaker rake who meets his match in an unusual girl who has just arrived in England from India.
Millie Ashton thinks London society is full of empty headed,
arrogant fools, but when she meets Alex Radley she falls desperately in love
with him.
Fearing humiliation and rejection, she decides the only sensible
thing to do is take her pride and go home to India. Men like Alex do not fall
for girls like her, whereas every girl loses her heart to Alexander the Great.

Alex Radley, Marquess of Brooke rules the ton like a god, but
even gods are known to fall for mere mortals.
With his wealth and title, wooing Millie should be an easy task.
But when his passionate love letter to her goes astray, Alex’s life becomes more
than a little complicated.

Millie Ashton is a highly intelligent, plump girl with a nose ring. She was born in Calcutta to English parents and has just arrived in London. She finds London cold and miserable and wants to go home to India. Millie has a secret collection of Indian erotic books. She falls in love with Alex, only to have her heart broken when a love letter goes astray.
Alex Radley, Lord Brooke is from a loving and happy family. He is a notorious heartbreaker among the young unmarried misses of London. He can have any girl he wants as his bride, but the moment he sets eyes on Millie he loses his heart. Alex has a secret which he is desperate to keep from Millie until after he has won her love.

Millie Ashton and her mother Violet are about to attend their first social engagement since arriving in England. Violet has spent 20 long homesick years in India while her husband restored the family fortunes. Her happiness at being home is tempered by the miserable mood Millie has been in since they arrived.

I took this scene out because it took too long for the reader to engage with the story, and also because I thought it might give a negative view of my heroine at the start.

I actually wrote this in a notebook on a long train journey and was really happy with it, but then my self-editor took me to task and I made major changes.

The unconventional Miss Millie Ashton, recently arrived from India, finds England a cold and dismal place. The fashionable ladies of London society look down their noses at her and it isn’t long before Millie is planning her return to the country she considers home.

When Millie befriends the high-spirited Lucy Radley, she also meets Lucy’s handsome brother, ‘Alex the Great’ and things take a turn for the better. Alex, the Marquess of Brooke, is considered the most eligible bachelor in London, yet he appears fascinated by the independent Millie.

Against the odds, their unlikely friendship deepens. But Alex has a secret and when a love letter goes astray, it threatens to destroy all their happiness…

Can Millie and Alex overcome the obstacles in their path to find true love? Or will one miscommunication ruin everything?
Book Links:

Born in England, but raised in Australia, Sasha has a love for both countries. Having her heart in two places has created a love for travel, which at last count was to over 55 countries. A travel guide is always on her pile of new books to read.
Sasha lives in Melbourne with her husband, teenage daughter and a cat who thinks sitting on the keyboard is being helpful. Her family have managed to find all but one of her secret chocolate hiding places.
On the weekend, Sasha loves walking on the beach while devising new ways to torture her characters.
Her debut novel, Letter From a Rake won the 2013 Book Junkies Choice Awards for Historical Romance.
ARRA Awards Finalist: Best Historical Romance for Letter from a Rake, Sasha Cottman Finalist Best New Author
Website | Facebook | Twitter |

Giveaway: A ebook copy of Letter from a Rake is up for grabs internationally.

To enter Giveaway: Please post a comment to this Q: I would love to know what readers of historical romance look for in a book. Do you like sweet or hot regency novels?

Please note: This contest will close on Friday July 25, 2014 at 8:59 PM (PT) and the winner(s) will be notified via email and on this Post. Winner(s) will have 48 hours to respond to the e-mail before a new winner is selected. All entrants must adhere to HJ’s official giveaway policy.

46 Responses to “Edits Unleashed & Giveaway: Letter from a Rake by Sasha Cottman”