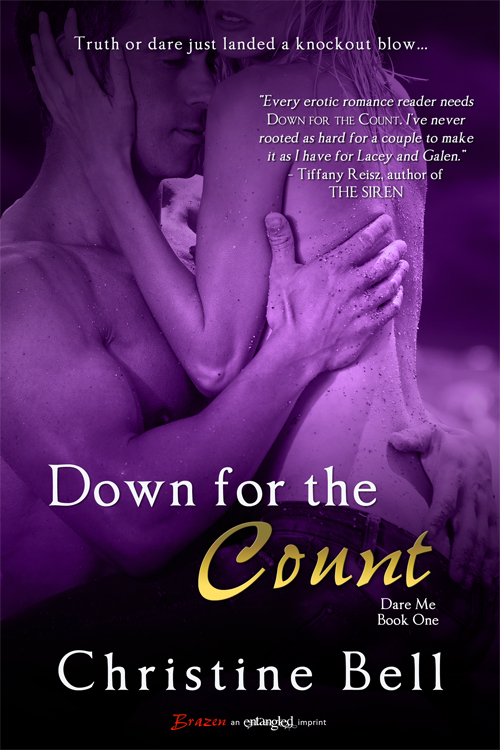 Down for the Count by Christine Bell

When Lacey Garrity finds her groom in flagrante delicto in the reception hall closet with her bridesmaid, she’s saved by her best friend’s older brother—childhood tormentor, crush, and boxing bad boy Galen Thomas. Galen’s solution is both exciting and dangerous. What better way to forget the mess of her life than go on her honeymoon with a hot guy who can’t promise anything beyond today?

Galen had been counting on Lacey’s wedding to put her out of reach—and out of his mind—once and for all, but their steamy Puerto Rican escape is testing all his boundaries. Now that Lacey’s embracing her inner bad girl, Galen is tempted to throw in the towel and claim her for himself. But with the biggest fight of his career on the line and an important business merger threatening to derail Lacey’s resolve, their romance might be down for the count before it even begins.

Down for the Count by Christine Bell was a sexy, fun and emotionally uplifting story that captured my attention right from the beginning. The author did a great job drawing readers immediately into the unfolding drama when Lacey discovers her just wed husband, Marty having sex with one of her best friends, Becca at their wedding reception and the aftermath that followed the discovery. What should a woman do under this humiliating circumstances? Ask your other best friend’s brother and secret crush to cart you away on his motorcycle, get drunk and go on your honeymoon to Puerto Rico with him.

I loved the character of Galen, who was sexy, strong, chivalrous and always tried to get Lacey to believe in herself and to live her life without any regrets. He always saw the best in Lacey and tried to instill more confidence in her. I really enjoyed the witty dialogue throughout this book between Lacey and Galen as well as with other supporting characters. It was great to see her close friendship with Cat, who was a woman to be reckoned with and would do absolutely anything for her best friend, which includes dealing with Lacey’s mom aka The Admiral. The scenes with new beach friends, Cyrus and Nikki had me chuckling and smiling due to a miscommunication.

I thought Lacey and Galen had great chemistry whether they were talking, laughing or making love. I will tell you that the sex scenes were totally hot! Galen also showed a really sweet and tender side whenever he gazed at Lacey that had my heart melting.

I thoroughly enjoyed this story, the characters and dialogue from beginning to end. It had a great mix of drama, friendship, love and laughter. I would recommend this to romance readers.