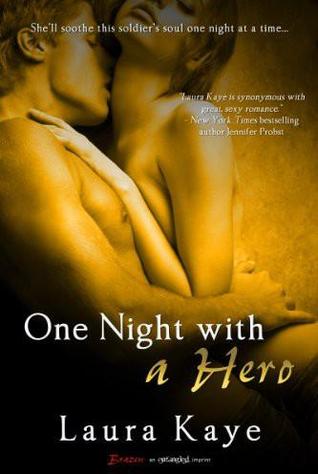 One Night with a Hero by Laura Kaye

He wants just one night…

After growing up with an abusive, alcoholic father, Army Special Forces Sgt. Brady Scott vowed never to marry or have kids. Sent stateside to get his head on straight—and his anger in check—Brady’s looking for a distraction. He finds it in his beautiful new neighbor’s one-night-only offer for hot sex, but her ability to make him forget is addictive. Suddenly, Brady’s not so sure he can stay away.

…what they need is each other.

Orphaned as a child, community center director Joss Daniels swore she’d never put herself in a position to be left behind again, but she can’t deny herself one sizzling night with the sexy soldier who makes her laugh and kisses her senseless. When Joss discovers she’s pregnant, Brady’s rejection leaves her feeling abandoned. Now, they must overcome their fears before they lose the love and security they’ve found in each other, but can they let go of the past to create a future together?

One Night With a Hero by Laura Kaye was a sexy, emotional and uplifting story about survival, hope, love and family that captured my attention when fireworks sparked between Brady Scott and Joss Daniels.

They are two people fighting their own demons from the past and not looking for anything permanent except for the one-night stand they agreed to. Things rarely goes as planned as Brady and Joss cannot forget the passionate kisses and hot sex they shared and are soon swept away again when they discover only a wall separates them and their mutual desires. However, their road to happiness was not an easy fete as Brady must overcome his anger issues due to his abusive childhood and his resolve of never having a wife and child in his future while Joss needs to overcome her abandonment and trust issue.

I enjoyed the introduction of these two main characters and the witty dialogue, banter, and teasing that went on between them right from the beginning and throughout this book which had me smiling and chuckling. The internal dialogue they had with themselves was hilarious at times and I loved the one when Brady helped out babysitting which I could so relate to.

I especially love when the hero of a romance story is a tormented and imperfect soldier and Brady fits this perfectly. He must prove himself “fit” to go back to active duty and also his worthiness to be part of his baby’s life as well as hers when he pushed Joss away after she tells him of her pregnancy. Now he must convince her to take him back and I really enjoyed his gestures which were sweet and romantic. I admit Joss was too stubborn for her own good at times and I wanted to shake her and tell her to take him back but alas, all good things must take time.

The author did a great job including the right amount of drama, laughs and sex scenes to make this a very satisfying read.