Say Yes to the Duke by Eloisa James is the fifth book in The Wildes of Lindow Castle. I am a huge fan 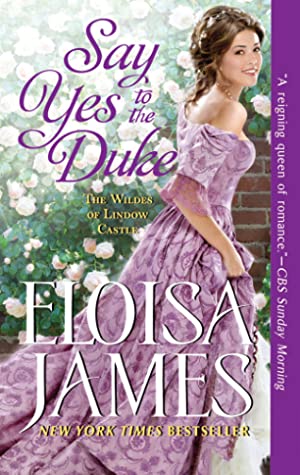 of this author and I love her writing style. Her books seem to grab my attention in the first paragraph and will not let go, even at the end! I have been known to reread one of her books a couple of times before I can finally set it aside. I adore her characters and her family sagas always bring me back to her books. Her use of pets and their hysterical antics can always bring a chuckle from me.

This book had plenty of chuckles in it along with some matchmaking by the hero and heroine. If you are looking for a good book that flows smoothly with lots of humor, this book is for you.

Viola Astley joined the Wilde household at the age of two when her mother married the Duke of Lindow. She was the opposite of the other Wilde children in the nursery, both by looks and personalities. She did not consider herself a Wilde, even though her stepfather considered her as one of his daughters. She was timid and shy to the point where she threw up when around people outside of her family until she meets the new vicar, Mr. Marlowe.

Viola is convinced she loves him and needs to save him from a bad marriage, so she sets out to win him. Along with her sister Joan’s encouragement and her reminding herself she is a Wilde when she got nervous, she was able to face her first ball of the season. She secretly arranges to meet Mr. Marlowe in the library during her ball, but once she gets there the room is already occupied by Devin, the Duke of Wynter, and his uncle. As she listens to their conversation, she becomes angry enough that when she confronts him, she forgets her shyness and feelings of being a non-Wilde family member.

Devin Elstan has decided it is time to marry and is determined to have Joan, Viola’s sister, who he considers is a true Wilde. He does not enjoy society and is ready to marry so he can go back to his mathematics. When Viola comes out from behind the curtains and takes him to task, he is instantly charmed. He knows that she is the one for him, but can he convince her?

Miss Viola Astley is so painfully shy that she’s horrified by the mere idea of dancing with a stranger; her upcoming London debut feels like a nightmare.

So she’s overjoyed to meet handsome, quiet vicar with no interest in polite society — but just when she catches his attention, her reputation is compromised by a duke.

Devin Lucas Augustus Elstan, Duke of Wynter, will stop at nothing to marry Viola, including marrying a woman whom he believes to be in love with another man.

A vicar, no less.

Viola has already said Yes to his proposal, but now he wants her unruly heart…and he won’t accept No for an answer.

One Response to “REVIEW: Say Yes to the Duke by Eloisa James”