Sugar and Spice by Angela Britnell was everything nice. I love me a great HEA and combined that with a great foodie book, wonderful characters, wicked ex’s and a sassy spunky 8 year old and you have a win ~ win on your hands. 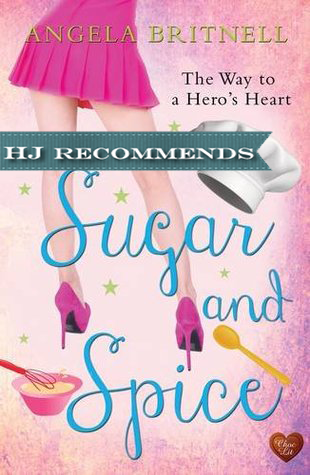 Lily Redman loves to cook. When she is in the kitchen, she is in her zone. Her greatest joy is feeding people. After leaving Tennessee and a cheating ex, she travels to Cornwall to drum up some of the best local talent for a new network television program, Celebrity Chef Swap. She is determined to make it on her own and prove to herself that she is something without her lousy, cheating ex. But her path to finding the Celebrity Chefs just got a little more complicated, when she meets Kenan Rowse.

Kenan Rowse is recently back from Afghanistan. His track record with women sucks. He is dealing with a cheating ex-wife and an 8 year old daughter that he has not seen in over 4 years. He doesn’t need complications. When he agrees to be Lily Redman’s driver, he needs to keep reminding himself to keep his eye on the road and his hands off the sexy, sassy red head.

Just when it looks like Lily and Kenan might give in to the passion building between them, complications from the ex’s, the arrival of his daughter, and a game of sabotage might detail this daring duo before they get out of the gate.

I loved Kenan’s character. He has seen and experienced things that nobody should have to endure. I don’t want to spoil the book so I am not going to get into his past, but I can tell you, it will make you hurt for what he has endured. Lily is a strong, independent woman who is out to prove something to herself and along the way to Kenan as well. I loved Mandy, Kenan’s daughter. She is spunky, sassy, sweet and endearing. Even though this was a longer book, it flowed well and before I realized it, I was at the end. I loved what Ms. Britnell did with these character and the ending of the story was just so sweet. So if you are looking for cute summer read that is full of Sugar and Spice and everything nice, pick up a copy of Sugar and Spice by Angela Britnell. I loved this story so much I gave it 5 spicy stars.

Fiery, workaholic Lily Redman is sure of two things: that she knows good food and that she always gets what she wants. And what she wants more than anything is to make a success of her new American TV show, Celebrity Chef Swap without the help of her cheating ex-fiancé and producer, Patrick O’Brien. So when she arrives in Cornwall, she’s determined to do just that.

Kenan Rowse is definitely not looking for love. Back from a stint in Afghanistan and recovering from a messy divorce and an even messier past, the last thing he needs is another complication. So when he lands a temporary job as Luscious Lily’s driver, he’s none too pleased to find that they can’t keep their hands off each other!

But trudging around Cornish farms, knee deep in mud and meetings with egotistical chefs was never going to be the perfect recipe for love—was it? And Lily could never fall for a man so disinterested in food—could she?

5 Responses to “REVIEW: Sugar and Spice by Angela Britnell”