The Baby Jackpot by Jacqueline Diamond  is a look into the issues that surround a couple that are presented with an unplanned pregnancy. Jacqueline Diamond has written a book that covers heavy issues with grace and style. You’re not going to want to miss this one! 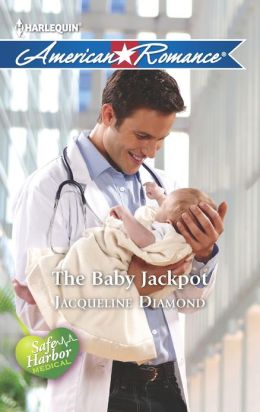 Stacy Layne works as a surgical nurse at Safe Harbor hospital in the fertility clinic. She is one of the first egg donors, and the first to work with a couple who become pregnant with the use of her eggs. Stacy can’t help but wonder what “her” babies will turn out like.

On her twenty-eighth birthday Stacy decides to celebrate at a local bar with some dancing and a few drinks. When a co-worker asks her for a dance she agrees, but when the man gets a little too frisky with her, Stacy attempts to make a quick getaway. She is surprised and chagrined that while trying to flee, she topples over on top of Dr. Cole Rattigon, the hot surgeon that she works for. The fall causes Cole to sprain his knee, and he is unable to ride his bike home, so Stacy readily agrees to give him a lift. What she doesn’t plan on is falling asleep curled up on the couch with Cole, and when they both wake up the unbridled passion that they feel for one another turning into a one night stand. When they realize the next morning what they have done and how easy it would be for her to become pregnant they both panic a little.

After a few weeks pass it becomes clear that Stacy is pregnant, not only that, her first ultrasound shows that she is carrying three babies not just one. Stacy feels like it would be in the best interest of the babies to be adopted by an infertile couple, and she plans to give them up.

She could endure a few tough months. The pay off would come when she saw how much this baby meant to an infertile couple.

Cole is willing to do anything, including marrying Stacy to help out with the pregnancy. Unlike Stacy, Cole would like to keep the babies and raise them, but he struggles to go along with Stacy’s wishes.

I want to hear my kids call me Da-Da. I want to know when to stick out my arm to keep my babies from getting a snootful of mashed potatoes.

Will Cole be able to win Stacy over with his kind and thoughtful ways? Will he be able convince her that their babies really belong with them?

The Baby Jackpot is an endearing and entertaining story that is packed with a lot emotion. I admired Stacy because she wanted to help infertile couples to achieve their goal of becoming parents. I fell in love with Cole because he was there for Stacy one hundred percent. This story was a joy to read and I recommend it to all of you romance fans out there! This is book ten in the Safe Harbor series, I will be going back to read the first books in this wonderful series.

They Know Everything About Babies…So why is recently single Stacy Layne suddenly on the mommy fast track? As Safe Harbor Medical’s first successful egg donor, she should have known better. That goes double (or should she say triple?) for Cole Rattigan, the country’s leading fertility surgeon.Cole prefers the operating room to figuring out what’s going on inside a woman’s head. But after an unplanned night of passion with his favorite nurse, the man who wrote the book on fertility is about to become a father…three times over!Stacy not only nixes Cole’s marriage proposal—she plans to give up the triplets for adoption. Stacy wants to be swept away. Can a man who’s just discovering his paternal side find the words to let the woman he loves know how much he cares?