Wild Ride Rancher by Maureen Child: The Texas Cattle Club are back at it again, this time in a rebuild and 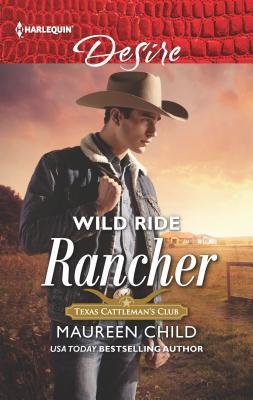 with more mystery and intrigue than ever.

Chloe Hemsworth was going to make her dreams come true. She had wanted to be a cowgirl ever since she was little. Her dreams were a little bigger now and involved more people, she was going to run a camp for city girls who needed to be shown that they could do anything. They could become cowgirls and work ranches, after all this was Texas, right?

Liam Morrow was almost free. He was almost to his own ranch free and clear of any debt he or his father had incurred. He had plans, big ones, that would help him live the life he thought he wanted and had planned on. He only had about a month left as foreman before he moved to his own spread, but until then it was not his time.

One thing that neither Chloe nor Liam counted on? Each other or the attraction or the Texas size storm that drew them together. However would a Texas size hang up draw them apart just as easily?

WOW. This is one of those novels that starts out with heat and never dies down. The readers are brought back to the cattle club with a huge dose of intrigue that is played out in a weird way, in fact that might be the only flaw to the book is the lack of explanation on that part. We that and the very last pages leave the reader begging for more and then forced to wait for the next book to come out. That said the romance piece of the book does end in a HEA so no worries on that part. Ms. Child has done a fantastic job with this story though and it will have you craving more.

USA TODAY Bestselling Author This rancher is set in his ways. Until temptation changes everything… Wealthy rancher Liam Morrow steers clear of Texas princesses. But when a storm strands him in Houston with Chloe Hemsworth, there’s no escape–from her business demands or the heat between them. So he reluctantly agrees to give her a chance to prove herself. And now Chloe’s on his ranch and in his bed. A lot can happen in two weeks…

« Spotlight & Giveaway: Entice Me by Kelly Elliott
REVIEW: The Key to Happily Ever After by Tif Marcelo »