Today it is my pleasure to Welcome author Susan Carlisle to HJ!

Hi Susan and welcome to HJ! We’re so excited to chat with you about your new release, A Dad Sent by Santa! 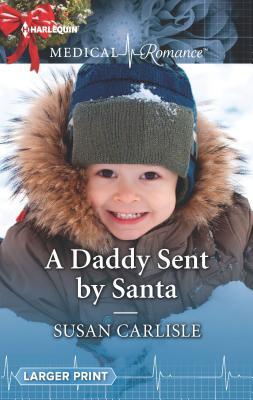 Paxton Samuels, a member of the elite social set and a family medical dynasty, wants to be anywhere but Boston when he discovers his fiance has had an affair just weeks before their wedding. Due to his and his family’s social status, it becomes a media sensation. So, desperate to escape the media circus, when a temporary job opens in nowhere Oklahoma he takes it for the month of December.
On his way to town he comes across an accident and soon gets to work helping the people that have been injured. He soon learns that the woman helping him is Lauren Wilson, a local, that is also going to be his nurse. She is a widow with a small child and plans never to leave the small town she grew up in.
Despite being strangers they are forced to spend the night in a hotel room together until someone can come pick then up. The next day they work together seeing patients and soon learn to admire each other’s skills.
Paxton is a fish out of water in a town so small so Lauren agrees to show him around. When there is a Christmas Parade Paxton decides to go and discovers Lauren and her young son are also in attendance. After the parade, they go to the church for a hot drink. They are standing under the mistletoe and are encouraged to kiss. The next weekend they attend the community Christmas dinner and dance together. They are unable to resist one another any longer, they end the evening by making love.
They share their days, evenings and nights together. Paxton goes to Lauren’s family Christmas dinner. He finds that he feels included and enjoys himself. Lauren has fallen for Paxton but is afraid he will not stay. Their Christmas Day together is wonderful.
But, a few days later and just before Paxton is due to leave to return to Boston, his ex-fiance shows up. He had not told Lauren about her and what happened between then. Lauren feels used and is angry.
Paxton leaves town believing all is lost. It will take something special for Lauren to forgive him, He returns to Boston and resigns his job. He is going back after Lauren, he wants a small place to work where he belongs, and that is with Lauren and her son. Days late, however, Lauren turns up on his door step, telling him she will live anywhere as long as he will have her. The two reconcile, returning to Oklahoma as a family.

“Uh…before you go could you help me out of these damp clothes?”

This book takes place in a small town in the panhandle of Oklahoma much like where my grandfather was born and raised. He was actually born in the territory of Oklahoma. Some of the history that Lauren shares about her family is my family history.

They both admire each others professionalism but beyond that Lauren appreciates Paxton’s care and concern for people he doesn’t know. His compassion and ability to get people to open up to him. Paxton’s likes Lauren down-to-earth attitude and love of community. They way she values family and time with people over things.

She moved along the hall into what was a small kitchen.
“What’s all this?” Paxton’s voice rose in exasperation.
Taking up every spot on his kitchen counter and small table were bags of food, casserole dishes and cakes.
Lauren giggled. “You’ve been visited by the welcome wagon.”
“The what?” His brows rose.
“Some of the women just brought you some food to say welcome and thank you. I’m sure, they all heard what you did last night.”
“But all this!” He waved his hand around in disbelief.
“Everyone in Last Stop knows you’re in town.”
He groaned. “I have more food than I can eat.”
She grinned. “Far more. Even my mom has a casserole in here somewhere.”
Paxton looked perplexed, as if it had never occurred to him that the town would be glad to see him. “Haven’t you ever had someone welcome you with food?”
He was looking through the food, reading the labels. “Never.”
“You’ll find things might be a little different around here.” Lauren stepped toward another open door.
Paxton followed her. “I’m starting to learn that in more ways than one.”

Because this book is about how a man who is a fish out of water until he realizes he has found really found home. You also don’t want to miss the small town Christmas setting with all the community warm with parades,hot chocolate, tree trimming — all the feel good things about the season.

I have just finished a book that will be out in March that is part of a wonderful continuity with three other authors. It takes place off the coast of Boston and is about an island clinic. The characters are wonderful and all the stories are fast paced. No one will want of miss theses books.

Giveaway: I will be giving away a print copy of A Dad Sent by Santa and a few other goodies for a nice Christmas package.

To enter Giveaway: Please complete the Rafflecopter form and Post a comment to this Q: Have you ever felt like a fish out of water? When and where?

Excerpt from A Dad Sent by Santa:

When a small-town mom…

Falls for a big-city doc…

Nurse Lauren Wilson is used to doctors coming and going in her Oklahoma town — and doesn’t expect prestigious Boston doc Paxton Samuels to be any different. Until they’re snowed in together and their sensual tension reaches boiling point! But knowing Paxton is due to leave after the festive season, can Lauren risk giving him her heart and her little boy a daddy for Christmas?
Book Links: Book Links: Amazon | B&N | iTunes | kobo | Google |

Susan Carlisle’s love affair with books began when she made a bad grade in math in the sixth grade. Not allowed to watch TV until she brought the grade up, Susan filled her time with books. She turned her love of reading into a love of writing romance. Susan has currently authored more than twenty-five books for the HarperCollins Harlequin imprint medical line. Her heroes are strong, vibrant man and the woman that challenge them.
In her past life Susan has been a full time mother to four children, a high school substitute teacher and now when she isn’t writing she is busy being a fun grandmother. She lives near Atlanta, Georgia, with her husband of over thirty-five years. Susan loves castles, traveling, cross-stitching and reads voraciously. Visit her at www.SusanCarlisle.com
Website | Facebook | Twitter | Instagram | GoodReads |

45 Responses to “Spotlight & Giveaway: A Dad Sent by Santa by Susan Carlisle”