Today it is my pleasure to Welcome author Nola Cross to HJ!

Hi Nola and welcome to HJ! We’re so excited to chat with you about your new release, A Family for Christmas! 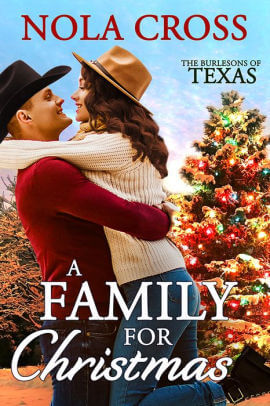 A Family for Christmas is a tale of redemption and hope. The hero, Bill, has only recently found out that he fathered a son eight years before. After initial hesitation, he must decide whether to stay uninvolved with the boy and his mother, or whether to step into shoes he’s always thought were too big from him to fill.

I’ve always been intrigued by the idea of people taking on something bigger than themselves, even if they’re not sure they can follow through. This is how we grow as humans. This makes life worth living and an inspiring story.

Although Bill appears briefly in the first book of the series, I didn’t know him well when I started writing book two. I wrote him a letter and asked him some questions, and his answers revealed who he was.

My favorite scene was actually very short, a night when Bill goes out of the bunk house to think things over.

Outside, the Texas sky was black and clear and lit with a million stars. The land rolled, dark and mysterious, for more miles than he could see. Up on the ridge, a coyote began to sing, the eerie notes quivering as they echoed against the barn.

He shivered. He knew how that coyote felt. He’d been alone for a good part of his life. But now he had the chance for something different. He had a son. And next Saturday he’d have a wife, too, if in name only.

Is that what he wanted? Annie’s lips on that long-ago night had pleasured him, shy at first and then bolder. Lusty. He thought of her throaty laugh, her delight when she aroused him. The sly, seductive expression in those emerald eyes of hers as she invited him back yet again into the warm, scented sheets of her bed. He had stayed with her that day long after he’d intended to be on his way, and had allowed her to star in his daydreams for years afterward.

It hit him like a twenty-pound sledge hammer: that was what he wanted. He’d been fooling himself up till now, thinking all this was only about the boy.. He huffed out a long sigh, his breath drifting up in a hazy vapor cloud. It was good to have some clarity. Now there was only the problem of getting Annie to want him back. He barely knew her, really, but he sensed she had changed in these last eight years. Closed down some. Put up some barriers. Forgotten those soft, yearning parts of herself.

Who was he to imagine he could reawaken that part of her? Bring her back to herself? And what if he was wrong about her?

He shook his head. He didn’t have the first idea where to begin. For now, he would wait and try to understand her better.

The coyote sang one, last, mournful chorus. Bill waited for the echoes to die away before heading back to his bed.

There’s a long, detailed scene of a snow storm that had to come together just right. Here’s a peek:

As Annie climbed to the higher elevations, the snow came down thicker and faster. She could barely see five feet in front of her face. If Ranger hadn’t had large patches of coal-black hair, she would surely have lost sight of him. Even as the dog ran on ahead, his busy nose working its way along the ground, Tulip was more hesitant. Head down against the storm, the mare slowly felt her way up the snowy track.

Pepsi’s tracks were indistinct now. Annie had to rely on Ranger to follow the missing pony’s trail. Into the white stillness, Annie called out for AJ. Her voice was muffled by the snow. Again and again she called, but there was no answer. A heavy, ominous curtain of white draped over the ridge, covering everything.

Yes, this is typical of my Western romances.

This book is meant primarily as entertainment

I’m taking a little time off at the moment, but of course there are always new ideas perking away.

Giveaway: An ebook copy of A Family for Christmas & 3 Tule ebooks of your choice

To enter Giveaway: Please complete the Rafflecopter form and Post a comment to this Q: Would you have made the same choice that Annie did when Bill intentionally misunderstood her proposal?

Excerpt from A Family for Christmas:

Bill Smith shifted in his seat and, from force of habit, flicked on his turn signal. Ahead of him a thirty-foot iron gate rose out of the undulating range grass, towering like a monument above the red Texas soil. Detailed scrollwork and the nearly life-sized metal image of an Angus bull above the gate told him he had finally reached his destination.
Burleson Ranch.
He made the turn into the driveway and then came to a stop, waiting for the dust to settle. For his pulse to settle. Far in the distance, at the end of the gravel road, he could just make out a grouping of ranch buildings nestled against a ridge of rock studded with scrubby pine. His heart gave an odd lurch and then settled back into regular rhythm; his belly had been knotted up like a greenhorn’s lasso since he’d pulled out of El Paso early that morning.
The day had finally come, the one he’d been thinking about and planning for, for five long months.
What would happen when he knocked on Annie’s door?
Taking his foot off the brake, he let the truck roll forward a bit, then gradually eased on the gas. What if Annie refused to see him? What if she slammed the door in his face? He should have done a better job of keeping in touch with her since he’d left Texas. He had to admit that two lousy emails in five months could hardly be considered regular correspondence. He couldn’t blame her if she was upset about that.
What if her brother, Cash, answered the door? Would he give Bill a hard time? The two men had never really hit it off last summer, though everyone in the Burleson family had seemed more than grateful to him for what he’d done.
And then there was his worst fear of all: what if AJ blew him off? His heart took that awful lurch again. The little guy had seemed to like him just fine in the few days they’d had to get acquainted before the kidney transplant. But they’d all agreed it would be best not to tell AJ who Bill really was until he’d made a full recovery. As it turned out, Bill was discharged well ahead of AJ and went back to Seattle without the boy learning the truth. Unless something had changed, AJ still thought he was “Doctor” Smith, the friendly physician who had brought him a new cowboy hat and a set of toy pistols in the hospital.
Realizing his boot was once again resting on the brake pedal, Bill blew out a long sigh and eased forward. Gradually, the details of a sprawling ranch house, a massive barn and shop, and a maze of cattle pens became more distinct. He sat up straighter and squared his shoulders.
“Screw anybody who tries to stop me from seeing my boy,” he muttered. He was AJ’s biological father, damn it, and he had legal rights. If Annie wouldn’t agree to sign the Acknowledgement of Paternity form he had in his pocket and work out some kind of joint custody arrangement with him, he was prepared to go to court. Winning in court was a foregone conclusion; they’d all seen the DNA test results proving he was AJ’s dad. Hopefully, the Burlesons would agree before it came to that.

He never thought he’d have a real family Christmas…

For the past eight years, Bill Smith has been unable to set down roots. But he never forgot the magical night he spent with an auburn-haired beauty in Last Stand, Texas. When she finally tracked him down, he was more than happy to donate a kidney to AJ, the son he never knew he had. But now that AJ is better, Bill wants more time with him and his mother. He wants a family.

Annie Burleson can’t help but be grateful to this almost-stranger for saving AJ’s life. Still, she’s a little wary. AJ has already been through so much—what if Bill leaves again? And with Christmas in full swing, it’s difficult to discern which emotions are festive and which are forever.

As Annie and Bill’s lives collide, their mutual love for AJ makes this more than a marriage of convenience. But is it enough to give them the family Christmas they all deserve?

Nola began writing before she even started school and won her first writing contest at the age of nine. It’s always been her dream to be an author, and in recent years she’s been blessed to be living that dream. Her stories focus on emotion, spirit, and true love, stories she hopes her readers will relate to and want to read more than once. Small town America is her favorite fictional setting.

Nola lives with her husband and youngest son in a comfortable old fixer-upper in the foothills of the Cascade Mountains, in southwest Washington state. She loves to connect on social media with readers, authors and other friendly folks.
Website | Facebook | Twitter  | GoodReads |

20 Responses to “Spotlight & Giveaway: A Family for Christmas by Nola Cross”