Today it is my pleasure to Welcome author Miranda Liasson to HJ!

Hi Miranda and welcome to HJ! We’re so excited to chat with you about your new release, Coming Home to Seashell Harbor!

Hi, Sara, and thanks for having me! 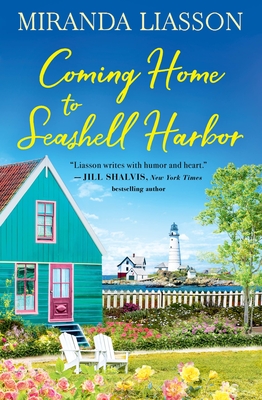 C is for Cam, my ex-footballer hero with a career-ending injury who is trying to reboot his life.
O is for Ocean. In a Victorian beach town. Yes!
M is for grandMother, who my heroine Hadley is very close to and whose dog boarding business is going downhill.
I is for Italian! Tony Cammareri (“Cam”) dreams of having a restaurant that serves the amazing food he grew up with.
N is for Nice Friends. Hadley has two sisters-of-the-heart and they totally have each other’s backs.
G is for Get Going to check out this fun beach read!

Hadley Wells managed to pee, buy two large chai tea lattes, and grab her luggage from the carousel before racing to her grandmother’s usual pickup spot at door number 7 at Philly International Airport. She tugged off her sunglasses and floppy hat, blowing out a sigh of relief when no one looked her way.

Cam is a very interesting character to me because he is really famous—like, Tom Brady famous. This makes it all the more crushing when an injury derails all his life plans.

Hadley initially planned to save the world but found it hard to resist a high-profile Hollywood job. Little by little, she lost her vision and got lost in a world that was very different from what she dreamed of.

Both these characters are on the brink of great change. And must make choices – to return to their true selves or keep going down a pathway that is…easier, but less fulfilling.

Hadley is still angry that Cam broke up with her long ago via a sticky note, and she feels he’s manipulated her grandmother, and they are both vying for the same building. And Cam doesn’t believe she’s serious about staying in town for longer than the summer. But these two frenemies can’t resist one another. And Hadley’s grandmother is going to make sure they don’t!

I love this scene, where the roof of Pooch Palace is leaking, because it starts out with them literally tossing buckets of water and slinging insults and ends up with…well, you’ll see.

Cam stood under the leaking ceiling, soaked to the skin. “You should get out of those wet clothes.”
Hadley stared at him.
Oh, geez. “I mean, when you get home. Because you don’t want to get sick.” He emphasized his intention, then turned to go dump the bucket before he said something else equally stupid.
Suddenly, another enormous chunk of the cheap, soaked ceiling cracked open. Instinctively, Cam dropped the buckets and grabbed Hadley by the arm, pushing her—and himself—out of the way. But he overshot, driving a little too hard to get them clear and lost his footing on the slippery tile.
He managed to cushion her fall as they went down, so Hadley landed on top of him. His arms were suddenly full of warm, soft woman, and the pure pleasure of being next to her—touching her, their limbs intertwined—took away all his sense. He started to untangle himself, but then he made the terrible mistake of looking up.
One glance at Hadley, soaked to the bone, a little dazed and stunned, made something turn over in his chest.
Maybe it was the primal memory of being like this with her a long, long time ago. Or the shock of being thrown together suddenly, against their will.
He meant to let go, but in her pretty, expressive eyes he saw…something. A flash of feeling. A spark of heat. A challenge. He couldn’t move his hands or look away. And he knew, sure as the electricity coursing hot and quick between them, that she felt it too.
He wanted her, as loud and demanding as his pulse throbbing at his temples, as certain as the fire coursing through his veins.
“Hadley, I—” He stopped, unable to put into words all that he was feeling. Finally, he tore his gaze away, looking up at the terrible mess of a ceiling.
“Please don’t tell me there’s another leak,” she whispered.
“No, I…I mean, I don’t know. It’s a wreck.” He was a wreck. A wreck of desire for her. Yet he was paralyzed in place, holding on to her soft arms, one heartbeat away from dragging her lips to his.
Another waterfall suddenly burst down from a new hole, close enough to splatter them thoroughly.
And then she laughed. A slow giggle at first—and then the unladylike one he remembered so well.
It was just as ridiculous and incongruous and—okay, snorty—as before. And then he laughed too.
“Had, that laugh,” he said softly, shaking his head. His voice sounded too quiet, too tense. Unnatural. “It’s…exactly the same.”
“Hey, I owned my laugh a long time ago,” she said, starting to roll off of him.
“No, I—” He held on to her arms, preventing her from leaving. “I wasn’t being critical,” he hurried to say. Her eyes, bright and assessing, were wary. But was her heart beating as his was, fast and steady in his chest, like his entire body was on alert? “I missed it,” he blurted out.
“Oh.” She looked puzzled. Surprised.
A slow, aching heat rose up inside him, and suddenly he knew the truth. He’d missed more than her laugh. He’d missed…her.
His gaze dropped to her lips, full and lush and open in surprise. And then he bent his head and kissed her.

Ha! I don’t know. This book is closed door and has a PG-13 rating. So you get to imagine your own sexy-times playlist!

There’s a difference between leading your life the way you think you should and leading it in a way where you follow your heart. And it’s better to choose the heart part or you can get yourself into big trouble.

I’m working on a book for Entangled Amara called The Sweetheart Deal, the start of small-town romance series about three sisters. And I’m working on the second book in the Seashell Harbor series out next May, which is called Sea Glass Summer (Kit’s story).

To enter Giveaway: Please complete the Rafflecopter form and Post a comment to this Q: Is it better to follow your heart or be practical – or somehow find a way to do both?

An emotional novel about first love, second chances, and what it means to follow your heart from this award-winning author who “writes with humor and heart” (Jill Shalvis, New York Times bestselling author).

Hadley Wells swapped her dreams of saving the planet for the glamour of Hollywood. But when a very public breakup reveals cracks in her not-so-perfect life, she returns to her hometown to reassess what it is she truly wants. Unfortunately, Seashell Harbor has some trouble of its own—including the first man to ever break her heart.

A serious injury forced footballer Tony Cammareri into early retirement—now he’s determined to reboot his life with a splashy new restaurant venture. He knows better than to expect a happy reunion with Hadley, but he’s determined to make up for the way things ended between them. Yet when Tony and Hadley end up vying for control of the town’s future, they find themselves once again on opposing sides.

As their rivalry intensifies, they must decide what’s worth fighting for—and what it truly means to be happy.
Book Links: Amazon | B& N | iTunes | Google |

Miranda Liasson is a bestselling author whose heartwarming and humorous romances have won numerous accolades and have been praised by Entertainment Weekly for the way she “deals with so much of what makes life hard . . . without ever losing the warmth and heart that characterize her writing.” She believes we can handle whatever life throws at us just a little bit better with a laugh. A proud native of Northeast Ohio, she and her husband live in a neighborhood of old homes that serve as inspiration for her books.
Website | Facebook | Twitter | Instagram | Goodreads |