Today it is my pleasure to Welcome author Jane Ashford to HJ!

Hi Jane and welcome to HJ! We’re so excited to chat with you about your new release, Earl on the Run!

Thanks for inviting me! 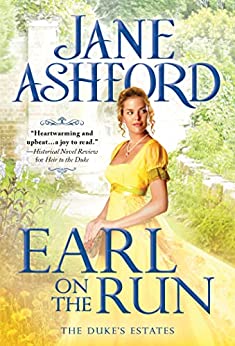 Fuming at her tyrannical grandfather’s demand that she marry a title, Harriet Finch plunges into a reckless, rebellious flirtation with a charming rogue. Imagine her chagrin when she discovers that her provocative new love is actually an earl! She’s furious, even though it’s the last thing he wants to be.

He was winning her over, and a true pleasure it was. “I don’t think so. The stables are empty with the gig gone. And the shutters are closed on the upper floors.” In fact, Ferrington Hall looked as if it hadn’t had any careful attention in years. “My name’s Jack,” he added.
She tossed her head.
“It would be polite for you to give me your name now.”
“No, it would not. This is not a proper introduction.”
Certainly a society girl, Jack concluded. And yet he couldn’t resist. “Very well, I shall call you Miss Snoot.” He turned toward the house. “Are you coming along with me, Miss Snoot?”
“Do not call me that!” But she followed him.

The heroine hates horses. The hero grew up in Boston, Massachusetts.

Beyond strong physical attraction, the heroine is attracted by the free, unconventional life the hero seems to offer. He is drawn by her intelligence and fiery spirit.

I was touched by a scene with the heroine’s mother.

“Tunbridge Wells?” Harriet’s mother said.
To Harriet’s horror, Mama’s eyes filled with tears. “You are most welcome at Ferrington Hall, of course. Indeed, we want you there. Absolutely. Both of us. Ferrington only thought…”
“But how could I return?” her mother interrupted. “I’ve been so foolish about our money.” Her hands clasped convulsively.
“He would like to settle an income on you. A permanent one that could never be withdrawn.”
“Oh Harriet!” The tears spilled over. “So generous.”
“So that is what you would like?” Harriet still wasn’t certain.
“More than anything. Oh Harriet, can it really be true?”
“Quite true.”
Her mother’s breath caught on a sob. “I never dared dream… I would visit you, of course. It is not too far away. But to have my own… You say our old house can be taken?”
“Ferrington has bought it,” Harriet replied.
“Bought!” Her mouth fell open. “Bought?”
“Yes, Mama. For you.”
She stared, astounded, wordless.
“What has happened?” asked Charlotte, coming over to join them. Sarah trailed along behind.
“Harriet is marrying the most wonderful man in the world,” said her mother.
“Really?” Charlotte rested her satirical dark eyes on Harriet.
“I think perhaps I am,” she agreed.

For a rollicking vacation from the daily grind.

I just finished volume 4 in The Duke’s Estates series. It is called A Most Intriguing Lady and tells Charlotte Deeping’s romantic story. I’m beginning on number 5 now.

Giveaway:  A print copy of Earl on the Run by Jane Ashford

To enter Giveaway: Please complete the Rafflecopter form and Post a comment to this Q: At what point in a relationship should one tell everything?

Excerpt from Earl on the Run:

A reluctant earl flees from his new role
A wild lady yearns to escape her family’s strict rules
They meet, and find refuge in each other

The missing Earl of Ferrington doesn’t want to be found…

At the end of the London season, Harriet Finch reluctantly returns to her wealthy grandfather’s country house. His rigid opinions for how she should live and whom she should marry sparks Harriet’s rebelliousness. Yearning to reclaim her freedom, Harriet goes for a long walk and a handsome rogue from the nearby Travelers camp catches her eye.

Little does she know, the rugged traveler she’s flirting with is Jonathan “Jack” Frederick Merrill, the missing Earl of Ferrington in disguise. Will Jack tell Harriet the truth about who he is for the sake their blossoming relationship? Or will he keep his distance altogether? Time is running out, and the earl can’t hide forever…
Book Links: Amazon | B&N | iTunes | kobo | Google |

Jane Ashford discovered Georgette Heyer in junior high school and was captivated by the glittering world and witty language of Regency England. That delight was part of what led her to study English literature and travel widely. Her books have been published all over Europe as well as in the United States. Jane was nominated for a Career Achievement Award by RT Book Reviews. Born in Ohio, she is now somewhat nomadic. Find her on the web at janeashford.com and on Facebook at facebook.com/JaneAshfordWriter, where you can sign up for her monthly newsletter.
Website | Facebook | Twitter | Instagram | GoodReads |

« Spotlight & Giveaway: Fourteen Days of Valentines by Charlee James
REVIEW: A Deal for the Tycoons Diamonds by Emmy Grayson »

23 Responses to “Spotlight & Giveaway: Earl on the Run by Jane Ashford”