Today it is my pleasure to Welcome author Jenny Proctor to HJ!

Hi Jenny and welcome to HJ! We’re so excited to chat with you about your new release, How to Kiss Your Grumpy Boss! 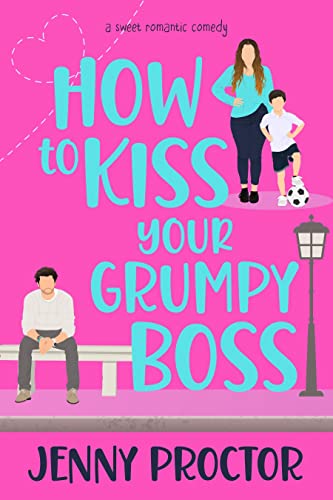 How to Kiss Your Grumpy Boss is the second book in my How to Kiss a Hawthorne Brother series. It’s about the oldest Hawthorne brother, Perry, who has recently endured a pretty terrible divorce and is jaded and, well, just GRUMPY. But deep inside, he longs for a second chance at love, for the kind of family he grew up in. Which brings us to Lila, his virtual-turned-in-person assistant who is waking him up! But Lila comes with her own complications. She’s a single mom with a five-year-old son, so even spending time alone is tricky! But these two–they are totally meant for each other. Their chemistry and connection is strong, and even though it takes them a minute to figure it out, they’re both looking for the same thing!

Just as I am? This man cannot be real. If I wasn’t touching him, I might wonder if he were a mirage. Some fantastical figment of my imagination embodying everything I could possibly desire.

So, Lila, our heroine has a slight advantage on our hero, Perry, because she’s seen pictures of him before she meets him person. He comes from a family of very handsome brothers, one of whom is very famous, so they have a bit of a reputation. Perry, on the other hand, believes Lila is an elderly grandma for the first weeks of their entirely online interactions. He’s totally surprised when he meets her in person and realizes she is definitely NOT elderly! As for what sends off those first sparks, Perry immediately notices Lila’s eyes and her curves. He also appreciates her sense of humor. Lila loves they way Perry handles a conversation with her son, Jack, appreciating that he didn’t dismiss or ignore all of Jack’s questions.

So, the very first scene I imagined before I’d written a single word happens toward the end of the book. Lila, who has been raising Jack for three years on her own, is getting him ready for a special breakfast at the school. Jack is supposed to wear a tie, and Lila has no idea how to tie one. Perry arrives and steps in, lifting Jack onto a chair and helping him tie his tie while Lila watches on. Even before I’d written the scene, I had SO MANY EMOTIONS surrounding how this might make Lila feel, to see Perry stepping in, filling in the gaps. Falling in love can be such a powerful experience, but when you layer in the complications of motherhood, of knowing whoever you fall in love with has to also fall in love with your kid? I just really wanted to highlight the complexity of how that might feel.

A tiny snippet of Lila’ s reaction to this moment:

Perry is already inside, looking handsome as ever in a navy-blue suit. He’s standing in front of the entryway mirror, Jack perched on a chair in front of him. Perry’s arms are encircling Jack from behind, his larger hands shadowing Jack’s smaller ones as he walks Jack through the steps of tying his tie.

“Like this?” Jack says, his little voice barely loud enough to reach my ears.

“Just like that,” Perry says patiently. “You’re doing great. Good. Now just loop it through that hole and slide the knot up.”

My heart in my throat, I watch Jack’s reflection in the mirror as Perry slides the tie into place. Jack’s eyes light up. “I did it!”

“Great job, kiddo,” Perry says gently. “Now let me see.” He takes Jack’s shoulders and turns him so they’re facing each other. He adjusts Jack’s tie, then smooths down his hair. “All right. Looking good. I think we’re ready to go.”

It’s hard to quantify what’s happening inside my heart right now. To see them together like this, to see Perry teaching Jack, guiding him, loving him like a father would. I resigned myself a long time ago to the possibility of muddling through all the parenting milestones on my own. I’m not the best person to teach Jack how to understand what’s happening to his body when he’s going through puberty. I don’t have any personal experience shaving my face or working up the courage to talk to a pretty girl. But I was willing to try. To arm myself with videos on the internet and whole lot of gumption to do the best I could.

But to see Perry stepping up, voluntarily taking this tiny piece from me?

Tears fill my eyes as an ache fills my chest.

I want this so much.

I want Jack to have a dad.

I want us to be a family.

I feel like I’ve talked so much about the serious parts of How to Kiss Your Grumpy Boss, but it’s actually a very light and fun read! There are lots of apple puns and an enormous pig with a vendetta against our horo, and an ensemble cast of teasing brothers who banter with their brothers. The brothers are actually my very favorite part of this entire series. If you’re looking for a quick escape, this is a book that will give you one!

Right now I’m simultaneously working on book two in my co-authored Oakley Island RomCom series, Merritt and her Childhood Crush, and book three in my How to Kiss a Hawthorne Brother series, How to Kiss Your Enemy. Both should release early in 2023.

Giveaway: I’d love to give away a signed paperback of How to Kiss Your Grumpy Boss. Available in the US only.

To enter Giveaway: Please complete the Rafflecopter form and Post a comment to this Q: Are you a mood reader? Influenced by trope? Or do you stay to a strict TBR list and read books in order of when you added them?

Excerpt from How to Kiss Your Grumpy Boss:

Okay, this is a scene in which Perry is trying to take a selfie to upload as his profile picture on the app he and Lila (who is his virtual assistant) use to communicate. Now that he’s met her in person and discovered and beautiful she is, he’s trying to up his game a little!

Perry Hawthorne is my boss. Only my boss. And I do NOT have a crush.

When one of THE Hawthorne brothers—known by their chiseled jawlines and their family-run farm and event center—hires me to be his virtual assistant, I do everything I can to keep him firmly in the work zone.

His smoking hot profile picture does not.

But even if I do have a crush (a very tiny one), I can’t catch real feelings for a million different reasons.

Besides the whole business part of our relationship, I’m a single mom. I have to think about what’s best for my son, Jack. And my grumpy, divorced, humorless boss isn’t exactly giving me “ready to be a stepdad” vibes.

When Perry upgrades me from virtual to in-person assistant, I wonder if I’ve gotten him all wrong. He’s actually pretty great with Jack. And with me? Let’s just say the chemistry crackling between us might vaporize all my reasons for keeping my distance.

Trouble is, after his messy divorce, I’m not sure Perry’s ready to bet on a new relationship. But it isn’t just my heart that’s on the line. It’s Jack’s, too. And after everything we went through before my husband died, I’m not sure that’s a gamble I’m ready to take, no matter how desperate Jack is for a daddy.

How to Kiss Your Grumpy Boss is a sweet romantic comedy with all the sizzling kisses you want in a closed-door romance but no explicit scenes.
Book Links:  Amazon |

Jenny Proctor was born in the mountains of Western North Carolina, a place she still considers one of the loveliest on earth. She and her husband currently reside in the Charleston, SC area and stay busy keeping up with six children and a growing assortment of pets. She loves to hike with her family and spend time outdoors, but she also adores lounging around her home, reading great books or watching great movies and, when she’s lucky, eating delicious food she doesn’t have to prepare herself. Jenny’s romantic comedy LOVE AT FIRST NOTE was a 2016 Whitney Award Winner in the Contemporary Romance category. To learn more about Jenny, visit her webpage at www.jennyproctor.com.
Website | Facebook | Instagram |

« REVIEW: How to Kiss Your Grumpy Boss by Jenny Proctor
Happy FRIENDSGIVING #Giveaway! »

35 Responses to “Spotlight & Giveaway: How to Kiss Your Grumpy Boss by Jenny Proctor”