Today, HJ is pleased to share with you Mary Burton’s new release: I See You 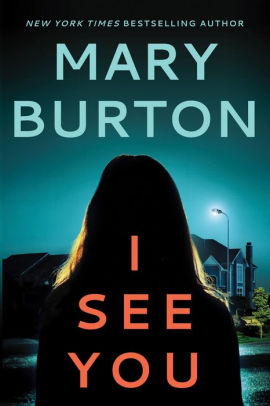 FBI special agent Zoe Spencer uses skeletal remains to recreate the faces of murder victims through sculpture. Though highly scientific, the process is also sensitive and intimate; she becomes attached to the individuals she identifies, desperate to find justice for each.

As Zoe examines old remains, she sees a teenage girl looking back at her—the victim in a cold case from over a decade ago. Zoe wants nothing more than to tell this young woman’s story and to bring her killer to justice.

Zoe’s case leads her to the victim’s hometown and to homicide detective William Vaughan, Zoe’s on-again, off-again lover. As the two become more involved in the case, they quickly realize that it isn’t as cold as they first believed: someone’s still out there hunting women. And with more women gone missing, time’s running out. Can they work together and stop this madman before he kills again?

Enjoy an exclusive excerpt from I See You

Zoe stood in her kitchen, drinking coffee and staring at the still-packed boxes she had moved to her townhome six weeks ago.

Technically, she had the day off. Ramsey had told her to kick back for a few days after what had been an endless stream of weeks filled with different cities, police departments, and killers.

Try as she might, she had not been able to sleep more than a couple of hours, so she had risen and made coffee. As she sipped, she cared less about the flavor and more about the punch of caffeine to chase away the fatigue. She really did not want to unpack boxes today any more than she had during the other countless opportunities. Even an armchair psychologist would call this procrastination classic avoidance. She had legally claimed the property and sold a perfectly good condo, but for some reason she could not settle into living here.

She crossed the stone floor to the table nestled in the nook of a bay window and thumbed through the stack of mail. A glance out the wavy glass windowpanes, original to the 1801 house, showed a vivid blue sky. Bright sunshine shone down on Prince Street’s cobblestone road sloping toward the Potomac River less than a block away. She climbed the narrow staircase to her room, thinking she would slide back into bed and catch up on reading.

The stairs creaked and the banister wobbled a little as she climbed the stairs past the dozens of black-and-white photos featuring Uncle Jimmy in all the incarnations he had enjoyed during his eighty-two years.

Vaughan had hit the nail on the head when he had questioned why she was keeping this place. As tempting as it had been to sell, as it was worth millions even in its dilapidated state, giving it up felt disloyal to Uncle Jimmy and Jeff. Uncle Jimmy, who had raised Jeff, was her last tangible connection to him. However, the true cost of repairing and maintaining this home was beyond her means. So here she was, able neither to sell nor to keep. She was caught in no-man’s-land.

The digital clock on the antique nightstand and her phone charger looked out of place next to the four-poster Queen Anne bed that dominated what had been a guest room.

The last time she had slept in this room had been the night Jeff had died. She had been unable to go home to the apartment they had shared, and Jimmy had been the only refuge that had felt remotely comforting. The old man had welcomed her in with open arms.

Before she had left for her last trip to Nashville, her single act of making this house her own had been to change the sheets on the guest bed, which, to her great relief, were seductively comfortable.

Hanging above the bed was one of the best forgeries she had ever seen of Monet’s Impression, Sunrise. If Uncle Jimmy had known anything, it was how to paint the best fakes. Over the last few years, Zoe had often had dinner with Jimmy, and over a bottle of Chateaux Margaux, he had shared the tips of master forgers like himself. Jimmy had given her the skills to become the agent she was.

Her phone rang, and she fished it out of the back pocket of her jeans. Caller ID displayed Jerrod Ramsey. Her boss had a reputation for not sleeping, which she had been warned was a hazard of the job.

Zoe took another sip of coffee that had cooled. “Agent Ramsey, how did you know I was awake? It’s my day off.”

He chuckled as if she had made a joke. “You met with Vaughan yesterday?”

“I did.” He never called for idle chatter. “Do I still have the next four days off?”

“Technically, you do. And technically, I’ve had five vacations in the last four years, but I’ve worked through every one of them.”

She pressed the mug to her temple, grateful her plans to unpack today were officially shot. “What do you need?”

Her interest perked. “I met her yesterday. I went with Vaughan to make the death notice.”

“She’s missing, along with her daughter. The father is in surgery right now. He told the responding officer that he was stabbed by an unknown intruder.”

There should have been a universal law forbidding evil on such beautiful days, she thought. “I can be at the residence in a half hour.”

“Good. The media has already gotten wind of it, and I’m sure you realize there’s a lot of pressure to find the mother and daughter as quickly as possible.”

“Vaughan and I spoke to Nikki McDonald yesterday as well.”

“She’s no doubt leading the charge from the media.”

He ended the call, and she quickly stripped and stepped into the shower. She toweled off, dressed in a dark pantsuit, and coiled her long auburn hair into a twist. She drained the last of her coffee and then, securing her badge and gun to her belt, grabbed her purse and headed down the stairs.

Out the back door, she cut across the long narrow backyard, past Jimmy’s private garage, currently crammed full of God only knew what, and through the tall privacy gate to the street. Up a block, she found the spot where she had parked her Ford Explorer. She made a mental note to clean out the damn garage.

After tossing her bag in the car, she slid behind the wheel. She had thought after last night it would be a while before she would see Vaughan again, if ever. It had felt a little too personal, and a long break was in order. But here they were, working together again. At least this morning she had left him a note.

“No rest for the wicked,” she muttered as she pulled out of the space.

Excerpt. ©Mary Burton. Posted by arrangement with the publisher. All rights reserved.

Giveaway: eBook copy of Mary Burton’s I SEE YOU

New York Times and USA Today bestselling novelist Mary Burton is the popular author of thirty-five romance and suspense novels as well as five novellas. She currently lives in Virginia with her husband and three miniature dachshunds. Visit her at www.maryburton.com.

« REVIEW: No Judgments by Meg Cabot
Spotlight & Giveaway: Christmas from the Heart by Sheila Roberts »

15 Responses to “Spotlight & Giveaway: I See You by Mary Burton”