Today it is my pleasure to Welcome author Cheryl Brooks to HJ!

Hi Cheryl and welcome to HJ! We’re so excited to chat with you about your new release, Mystic! 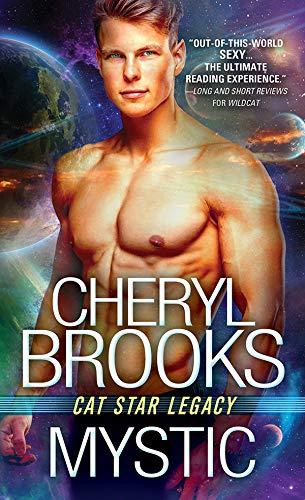 Her love is the one thing he never saw coming…
Sulaksha Enduran is still reeling from the death of her lover. He died of a mysterious plague—and it’s out of control. Sula is determined to find answers on her own, until an impossibly sexy Zetithian saves her life and joins her quest.

Despite the prescient abilities and power over the wind that enable Zetithian mystic Aidan Banadänsk to rescue Sula from certain death, he couldn’t have predicted her unique effect on him. It shrouds her future in mystery…and fills him with unparalleled desire.

But Sula’s investigation has put her in the crosshairs of a deadly conspiracy. With an entire planet’s population at stake, Sula and Aidan must risk it all to save the planet, the galaxy…and each other.

The heroine, Sulaksha Enduran, is an anthropology student turned amateur archeologist who dresses like Indiana Jones.
Not only does she dress like the fictional archeologist, which is quite practical, given her search for evidence of prehistoric civilizations in the remote mountains of Rhylos, she knows exactly whom she is emulating. To me, this doesn’t seem like an impossible plot element in a futuristic novel. No one can know what fragments of present-day pop culture will stand the test of time. After all, we still follow traditions dating back thousands of years, and some businesses have been in continuous production for centuries. And who would have guessed when Star Wars first debuted that it would still be very much a part of our culture more than forty years later? So who can say whether Indiana Jones will be remembered a thousand years from now? I can only assume that some aspects of our daily life will endure long after we’re gone, even though I can’t predict the future—unlike our hero, Aidan Banadänsk, which leads us to fun fact #2…

Aidan Banadänsk’s Mordrial and Zetithian bloodlines combine to enable him to predict the future with terrifying accuracy.
Mordrials are all born possessing control over one or more of the basic elements and some form of mental telepathy. Although Aidan’s fortune-telling abilities only extend to the lifetimes of the people he encounters, he is also Zetithian, a species known to have occasional visions of significant events. Therefore, I had a sound basis for giving him the ability to envision snippets of the future. Wisely, he has kept this talent hidden, fearing that such knowledge could be subverted by the unscrupulous. In keeping this secret, he has disavowed having any Mordrial talents whatsoever, including his control of the wind. Which leads us to fun fact #3…

Our hero should have been a bird.
This story was originally conceived as the first book in a series starring the Avian clones, which were first introduced in The Cat Star Chronicles10:Rebel. These were human clones who had been genetically engineered to have wings large enough to enable them to fly, superior eyesight, and remarkably acute hearing. Unfortunately, my editor didn’t believe there was a market for bird-like heroes, so when I needed a plot for a second book in the Cat Star Legacy series, I took the bare bones of the Avian clone story and gave it to a cat-like Zetithian. Like other Zetithians, Aidan has feline characteristics and sexual abilities that are second to none. But because he is also part Mordrial, giving him sufficient control of the wind to enable him to create strong updrafts was as easy as it was logical. After that, all he had to do was to don a pair of magnificent wings and fly.

To enter Giveaway: Please complete the Rafflecopter form and Post a comment to this Q: If you had a choice of which element to control, would you choose earth, wind, fire, or water? Why?

Cheryl Brooks is a former critical care nurse and is the author of the ten book Cat Star Chronicles series. Maverick is the first book in her new Cat Star Legacy duo featuring the next generation of Zetithians. Cheryl resides with her husband, two sons, two horses, three cats, and one dog in rural Indiana.