Hi Nicole and welcome to HJ! We’re so excited to chat with you about your new release, One Hot Texas Summer! 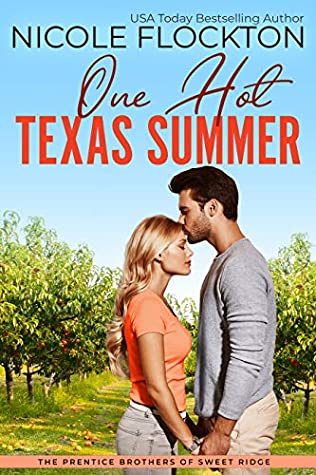 Kelly and Tate’s story is about learning that trusting someone to help you ease your burdens isn’t a bad thing, but in fact could be the best thing you could ever do. Together Tate and Kelly learn that the past doesn’t have to define their future.

Kelly rolled her eyes. “Fine. You want to know why I have a problem with him? It’s because I don’t want to think of my flowers as being a kiss-off gift to Tate Prentice’s latest bed partner.”
Of course, the song would finish while she was speaking. Her words echoed around the bar and everyone looked her way, including Tate and his brother.
Seriously, where was that damn sinkhole when she needed it?

Kelly is an independent woman who has her own business. She got an accounting degree and worked in the industry for a while. But after coming back to Sweet Ridge she returned to her first love – working with flowers.

Tate is a complex character. Usually the youngest of the family are the ones who are carefree and shrug off responsibility. Tate is the opposite he takes on more and more responsibility than he can handle.

One thing surprised me was Tate taking something his dad said to him and running with it. To me it was a sweet theme in the book.

What was my favorite scene, hmm, I think it’s the one where Kelly and Tate are visiting his Dad at the center where he’s recovering and receiving treatment after his stroke. He and Kelly are building a house of cards.

“Better be careful, Kelly girl—that card you’re about to put on could bring it all tumbling down.”
“Pfft,” she responded. “I know you’re trying to psyche me out, Trenton Prentice. But I’ve worked in the cutthroat world of corporate America accounting, so your mind games won’t work on me.”
Tate bit his lip to stop from laughing out loud. As Kelly placed her card on the top of her design, the whole thing wobbled before settling down, the card staying in place.
“See,” she crowed triumphantly. “Never any doubt in my mind it wouldn’t come tumbling down. Come on, Trenton, show me what you’ve got.”
She sat back and Tate leaned over and whispered in her ear, “Thank you.”
She turned and her lips were so close it wouldn’t take anything for him to close the gap and possess them. Only the fact his father sat across from them made him control the urge.
“For what?” she asked.
He canted his head to where Dad was getting ready to place his card on his creation. “This. For spending time with him.”
He thought for a second Kelly was going to shift, putting space between them again. If she did, Tate would want to snatch her close again.
“It’s no hardship at all. Your dad is fun, and it’s been a long time since I’ve built a house of cards.”
Out of the corner of his eye, he saw his dad’s fingers creeping closer and closer to Kelly’s house on the table.
“He’s going to knock my cards down, isn’t he?” she whispered.
“I cannot confirm nor deny the possibility that that event may occur.”

I don’t think there was a particular scene that was difficult to write in the book. Normally I just power through. Making sure to get the tension between the brothers always took some careful planning.

TATE STRODE THROUGH the orchards, frustration biting at his heels. The day had started off badly and had steadily worsened until he wanted to pull his hair out. Instead, he pulled off his cowboy hat, slapped some nonexistent dust off it, and jammed it back on. It didn’t make him feel any less frustrated, but it was better than slamming his fist into a tree trunk. Yeah, he didn’t need a broken hand with the festival almost upon them.
His mood could also be because he hadn’t seen Kelly in over a week since their weekend away, both of them so busy with last minute festival arrangements. The most they’d been able to do was text, and they’d had a couple of FaceTime conversations, which he wouldn’t have minded them turning into more. Only he didn’t want to be getting hot and heavy with Kelly only to have Dad call him because he needed something.
His phone buzzed in this pocket and he pulled it out, anticipation leaping in his throat. He might see Kelly’s name scrolling across his screen. Sadly, it was Tyler’s—another cause of his frustration.
“What do you want, Tyler?” So what if his greeting was less than friendly. His brother had pulled another disappearing act and instead of being around to help with some of the setup, he was in Houston speaking to wine representatives to see if they could get his wine into restaurants once it officially launched.

This book is very true to my brand. A sweet romance with a bit of heat and a lot of good feel moments.

That it’s okay to lean on people when you need it. That asking for help doesn’t mean you can’t cope.

Giveaway: An ebook of One Hot Texas Summer and 3 Tule ebooks of your choice

To enter Giveaway: Please complete the Rafflecopter form and Post a comment to this Q: We’re coming into summer. What’s your favorite thing to do during the season?

Excerpt from One Hot Texas Summer:

She’s been fooled before by sweet words and hot kisses

Kelly Turner loves being a florist, and being asked to take the lead on the new site for the town’s festival is an honor. If only she didn’t have to work closely with the town player, Tate Prentice. After being burned once by a serial cheater, her inconvenient attraction toward Tate needs to be nipped in the bud.

Tate Prentice’s focus is on ensuring his father recovers fully from his stroke and making sure the family’s peach farm continues to thrive. When his brother nominates the farm to be the satellite site for the festival, he’s less than impressed. The only good thing is he’ll be working with Kelly – even though he knows she’ll never give him a second glance, not with his reputation.

The more time Kelly spends with Tate, the more she sees the man behind the reputation. Can she trust her instincts, or will her heart be broken once again?