Today it is my pleasure to Welcome author Linda Broday to HJ!

Hi Linda and welcome to HJ! We’re so excited to chat with you about your new release, Saving the Mail Order Bride! 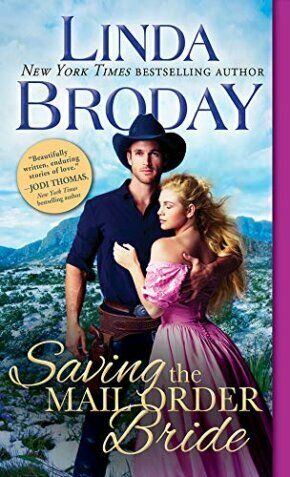 I loved writing this second book in my Outlaw Mail Order Brides series and I think it’s the most humorous story I’ve ever written. Mail order bride, Nora Kane, makes outlaw Jack Bowdre crazy. He’s been arrested and on his way to jail aboard the stagecoach the marshal flagged down. Nora is the only other passenger. After the stage overturns, Jack is about to make his getaway when Nora slaps the other end of the handcuffs on her wrist. Suddenly, they’re afoot and on the run, handcuffed together with only the clothes on their backs. It’s anybody’s guess if they can outrun the posse.

I had so much fun with these two and here are five facts that added depth to the story:

Okay, I hope you’ll give this book a try. I don’t think you’ll find it boring. The release date is April 30.

To enter Giveaway: Please complete the Rafflecopter form and Post a comment to this Q: Would you survive in rugged land if you had to, without a Walmart or grocery store? Would you know what you could eat to stay alive?

When the West was wild
And man’s law favored the few
These extraordinary women could be found…
…in the heart of an outlaw.

He may be a wanted man, but all outlaw Jack Bowdre ever desired was a second chance. Now he’s on his way to jail, completely unaware that his unexpected—and unexpectedly beautiful—traveling companion is none other than Nora Kane…his mail order bride.

It’s too bad Nora doesn’t know Jack is her groom-to-be. All she sees is a scoundrel. But when their stagecoach crashes and the truth comes spilling out, they’re suddenly left to fend for themselves—and each other. The longer they’re together, the stronger their feelings grow. Hounded by desperate men bent on doing them harm, Nora and Jack will do whatever it takes to find their happily ever after…but first, they’ll have to shake the devil from their trail.

At a young age, Linda Broday discovered a love for storytelling, history, and anything pertaining to the Old West. After years of writing romance, it’s still tall rugged cowboys that spark her imagination. A New York Times and USA Today bestselling author, Linda has won many awards, including the prestigious National Readers’ Choice Award and the Texas Gold. She resides in the Texas Panhandle where she’s inspired every day. Visit her at www.lindabroday.com.