Today it is my pleasure to Welcome author Anna DePalo to HJ!

Hi Anna and welcome to HJ! We’re so excited to chat with you about your new release, So Right…with Mr. Wrong! 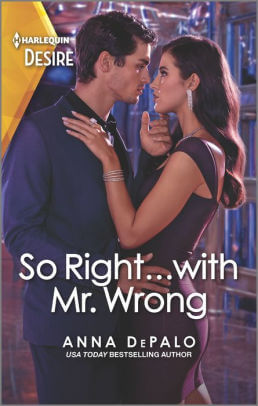 So Right…with Mr. Wrong is the fourth and final book about The Serenghetti Brothers siblings (Second Chance with the CEO, Hollywood Baby Affair, and Power Play) but can definitely be read alone. Fashion designer Mia Serenghetti desperately needs a date for the biggest gala of the season. Her only option? Tech hotshot Damian Musil—whose family is the Serenghettis’ greatest rival in the construction business back home. Will they risk reputation and family to explore their intense connection? Falling for Mr. Wrong has never been so dangerous…nor felt so right. I love this title! 🙂

I love the way Mia and Damian banter. Take a look:

He pointed to his costume. “Call it my hero complex.”
Mia blew a breath, causing tendrils of hair to lift and resettle.
“If you’re Robin Hood, what does that make me? Maid Marion?” she asked frostily.
Knowing it would provoke her, he scanned her ruffled costume, which revealed both leg and cleavage. “You don’t look the part.”
“Exactly.”
“Too much fiery temper.”
She frowned, annoyance stamping her face, before she smoothed her brow. “I agree, and that’s why your offer would never work. I’ve got outfits in mind for the Ruby Ball, and, let me tell you, nothing about them says they’re right out of Sherwood Forest.”
“Let me guess. Instead you’re the femme fatale and your escort is—”
“Not you.”

I grew up with relatives who worked in the fashion industry, so I always thought it would be cool to write about a designer. Also, like the other Serenghetti books, this one is about family ties and finding yourself.

I do a GMC (goal-motivation-conflict writeup) for each of my main characters before I start a book. That said, there are often surprises. Damian’s relationship with his widowed father, an immigrant who started his own construction company, evolved from first draft to final. At first Jakob was the bad guy, but then it all became more nuanced and complicated—as most family relationships are.

My favorite scene is the opening—where Mia and Damian run into each other in costume. Let’s just say, it’s clear from their outfit choices that these two are destined for each other even if they don’t know it.

The hardest scenes to write were the ones between Mia and Damian meeting her family and then encountering his. There was a lot of character development and emotional exploration. It was difficult to get just right!

This is an enemies-to-lovers story involving rival families in the construction business. I hope readers can relate to a story about not always loving the “right” person.

I’m currently working on a novella.

To enter Giveaway: Please complete the Rafflecopter form and Post a comment to this Q: SO RIGHT…WITH MR. WRONG is mostly set in New York City. Have you ever visited, or do you want to? Why?

Excerpt from So Right…with Mr. Wrong:

Damian smiled at her. “How’s it going with Sam? Have you run him to ground yet?”
Must he be so annoying? “Hardly. He’s on a plane to Singapore.”
“And the airline’s departure gate closed before you got there?”
“Wouldn’t you love it if I said I barely avoided arrest trying to stop him from boarding?”
He flashed a grin. “Somehow I doubt that’s the kind of publicity you’re looking for.”
The waiter put her soda down on the counter, and she took a sip. “No publicity is bad publicity. Isn’t that what they say?”
“I like a woman who goes after what she wants. So what’s your backup plan?”
She eyed him. “What makes you think I have one?”
“Well, since I’m standing in front of you,” he drawled, “I figured you’d be considering contingency options.”
Damn him. “You?”
He nodded, leaving his beer untouched. “Me. As it happens, I now have a business reason to attend the Ruby Ball, and something tells me you have an extra ticket.”
“I’ll sell it to you.”
…
She wavered. He waited.
Desperation won out, even if she was still suspicious. “Why would you be interested in an event that’s all about high fashion?”
He quirked his lips, his expression rueful. “I’m not, but my client is. His wife was a model before they married. Now they’re ready to retire, if they find the right buyer for their business. I aim to be Mr. Right.”
Mia rolled her eyes. “So you’re going to trot out your date, the fashion designer.” Me.
He looked amused. “A bonus I wasn’t looking for.”
She figured it was a testament to her recent history with men that being referred to as an unexpected bonus didn’t faze her. And Damian was a Musil, after all—she should keep her expectations low.
“And as it happens, a bonus for you, too. My client’s daughter is covering the Ball because she’s employed by Brilliance magazine.”
Mia drew in a breath. He obviously knew she’d jump at the chance to make a connection at one of the foremost fashion magazines around. Damn it. Temptation had taken an irresistible turn.
…
Before she could let herself dwell on it anymore, she blurted, “If anyone asks after the fact, I dumped you.”
Paradoxically, mild amusement stamped Damian features, and then he quirked a brow. “Should we shake hands on it?”
He was playing her, using his bargaining skills. But she knew some of her own. “The can-can girl and the villain?”
He laughed, not missing her allusion to their recent encounter at the costume party. “Sounds like the name of—”
“—a low-budget movie.” A disaster flick, hers. With the subtitle Mia Runs Out of Options.

Will their fake relationship…
inflame their families’ feud?
Fashion designer Mia Serenghetti desperately needs a date for the biggest gala of the season. Her only option? The smoldering tech hotshot Damian Musil—whose family is the Serenghettis’ greatest rival in the construction business back home. When the unexpected heat between them proves anything but make-believe, will they risk reputation and family to explore their intense connection? Falling for Mr. Wrong has never been so dangerous…nor felt so right.

Anna DePalo is the USA Today best-selling author of sexy, humorous contemporary romances published in over twenty countries. Her books have won the RT Reviewers’ Choice Award, the OCC/RWA Book Buyer’s Best, the NJRW Golden Leaf and the NECRWA Readers’ Choice. She is a member of Romance Writers of America and Novelists, Inc. Raised bilingual in Brooklyn by her Italian parents, she attended Harvard and practiced intellectual property law but now calls writing her passion. She lives with her husband, son and daughter in New York.
Website | Facebook | Twitter | Instagram | GoodReads |

« Spotlight & Giveaway: A Cowboy of Legend by Linda Broday
REVIEW: Ways to Ruin a Royal Reputation by Dani Collins »