Hi Michelle and welcome to HJ! We’re so excited to chat with you about your new release, The Best Intentions! 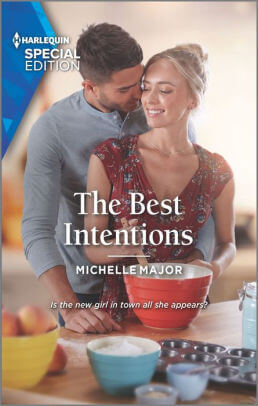 “To Daniel’s memory.”
Finn Samuelson raised his beer bottle and clinked it against Parker Johnson’s before throwing an expectant look toward Nick Dunlap.
Nick shook his head, the flames from the fire pit in his backyard crackling in the silence.

Kaitlin Carmody is bruised from her former life and has found a way to start over in Starlight, but when her boss’s son comes to town and thinks she’s scheming to steal his father’s money, Kaitlin has to prove herself without losing her heart.
Finn Samuelson left his hometown with no plans to return until his father needs him to help save the family business. But he doesn’t expect to find so much reason to stay in Starlight, especially in the form of Kaitlin.

This is the first in a brand new series centered around three old friends who made a vow a decade earlier never to fall in love. Finn, Parker and Nick have lost touch for years but remain loyal to each other – and their promise to avoid love! It’s been so much fun teaching these three hottie men that promises are sometimes meant to be broken. 🙂

Both of them are unwillingly attracted to each other – they are very similar in temperament and purpose even though they feel like they’re on opposite sides of the game board.

“Are you okay?”
“I lied,” he said through clenched teeth. “I’m totally afraid of heights.”
She brushed the hair away from her face as the Ferris wheel rose and fell again. She loved the breeze and the view and everything about the ride.
“I can get the guy to stop it so we can get off.”
Finn gave a sharp shake of his head. “I’m not admitting that to anyone but you.”
She pressed two fingers to her chest when it pinched. Something about seeing this strong, alpha male’s vulnerable side made every one of her defenses start to disintegrate.
Inching closer, she wrapped her arm around his waist. “I’ve got you,” she told him. “It’s all going to be just fine.”
That teased a bit of a smile from him. A smile that disappeared when they abruptly stopped at the very top of the ride.
“What the hell…” he muttered.
“Remember, it’s part of the fun,” she promised. “Look around.”
He kept his gaze fixed on hers. “No way.”
“Finn, it’s amazing.” She turned to look behind her, where she knew she’d be able to see Puget Sound in the distance. Her movement caused the car to sway.
Finn muttered a hoarse curse as he gripped her shoulders. “Don’t move.”
“We’re fine,” she assured him with a confident smile. “I told you I’d give you an adventure.”
“You’re going to give me a heart attack,” he countered, closing his eyes again.
His chest hitched in shallow breaths and she could see a thin sheen of sweat along his hairline. Oh, gah. Kaitlin had planned to take his mind off his troubles and instead she was serving up a different kind of stress.
“I’m sorry,” she whispered, placing her hand on his cheek. “I didn’t know…”
“It’s a stupid fear,” he said through gritted teeth. “I can manage a ski lift so I figured I’d be okay on this thing. I am okay. Seriously.”
He didn’t look anywhere near okay to Kaitlin. The Ferris wheel jerked and they moved one car length forward, rocking gently as the ride stopped again.
A muscle in Finn’s jaw clenched, and without letting herself think about what she was going to do, Kaitlin leaned in and brushed her lips over his. He didn’t react for a moment but then angled his head so that their mouths joined more fully. Even with the breeze picking up, she could smell the scent of him—shampoo and some spicy cologne. It had been a long time since her body had reacted to a man the way it did to Finn. A long time since she’d allowed herself to act on any sort of physical attraction.
In truth, she doubted she could have prevented this moment. She’d wanted to kiss Finn Samuelson since the moment she’d looked up from her desk to find him glaring down at her. Which was stupid and self-destructive, two things Kaitlin hadn’t allowed herself to be since moving to Starlight.

This is one of the first times they’ve had a private conversation and I think shows their connection.

“You don’t trust me,” she said with a laugh.
“My dad does, and that’s a start.”
She looked down, and a stray lock of hair fell forward to brush her cheek. He couldn’t help himself. He reached out and tucked the soft strands behind her ear. His fingers grazed her cheek and it was all he could do to resist leaning in to claim her mouth with his.
Earlier today this woman seemed like a threat to his father and the bank. Now it felt like she was the only true ally Finn could rely on. How the hell had that happened, and was it his libido leading?
He snatched back his hand and stood.
“We don’t have to be friends,” he said, more for himself than her. “But if you truly care about my father, you’ll help me figure out what’s going on at the bank. It would kill him to lose it.”
She stood, pulling the robe tight over her chest. “Okay,” she whispered, and the breathless note to her voice sent all of Finn’s blood south.
“Then I’ll see you tomorrow.”
“Tomorrow,” she repeated, tugging her lower lip between her teeth.
Finn swallowed a groan. “Good night, Kaitlin,” he said on a rush of breath.
Before she could answer or he could do something stupid like drag her into his arms, he turned and walked out into the night.

Trust yourself and each other!

The Welcome to Starlight series has two more books releasing in 2020 and I’m also thrilled to introduce readers to a new series for HQN, The Magnolia Sisters, with that book coming out in late March and The Merriest Magnolia releasing later this year.

Giveaway: I’d love to giveaway 3 print copies of The Best Intentions (US only). Thanks for commenting!

To enter Giveaway: Please complete the Rafflecopter form and Post a comment to this Q: It’s still winter weather in Colorado but I’m already looking forward to spring. What’s your favorite thing about the change of seasons? Mine is the first flowers that start to bloom.

Excerpt from The Best Intentions:

Kaitlin Carmody is a woman with a past—one she’d like to forget. A string of bad choices led to a fresh start in the small town of Starlight, so when her boss shows signs of serious illness, she’s determined to help him the best she can. But Finn Samuelson, her boss’s handsome, headstrong son, is certain Kaitlin is taking advantage of his father and running his family’s bank into the ground. When attraction overcomes reason, Finn must decide if Kaitlin is really a threat to his family…or its salvation.
Book Links: Amazon | B& N | iTunes | Google |

Michelle Major is the best selling, RITA award winning author of over twenty sexy and sweet contemporary romances. She loves second-chances love stories, smart heroines and strong heroes. A midwesterner at heart, she’s made the Rocky Mountains her home for over twenty five years and is thrilled to share her books with readers.
Website | Facebook | Twitter | Instagram | Goodreads |

« REVIEW: We Are Us by Tara Leigh
REVIEW: Falsely Accused by Shirlee McCoy »

61 Responses to “Spotlight & Giveaway: The Best Intentions by Michelle Major”