Today it is my pleasure to Welcome author Eve Gaddy to HJ!

Hi Eve and welcome to HJ! We’re so excited to chat with you about your new release, Truly, Madly Texas! 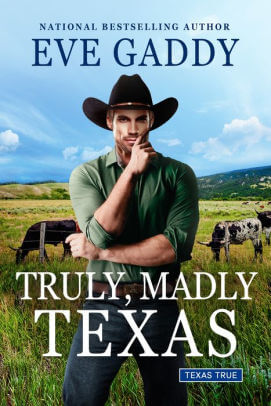 Chase Walker and Ella Slade. Two people who meet and have an amazing one-night stand. Neither of them knows that in a few days Ella will interview for the ranch manager job at the Walker ranch. Once there, Ella says there’s no way she can take the job but Chase soon convinces her that they can be friends and act like that night never happened. Best laid plans are made to be broken and these sure are. Chase has the devil of a time convincing Ella that he’s left behind his playboy ways. Ella was burned by a rodeo cowboy and the last person she wants to be involved with is another one. If only Chase wasn’t so hot. And tempting.

“Chase?” She looked up at him.
He looked down at her and smiled. “Ella?” He made it a question.
“What else can you do one-handed?”
His gaze dropped to her mouth. She could swear her lips tingled from the heat in his gaze. There went that badass smile again. “Oh, darlin’, are you sure you want to know?”

I played the What If game. What if the hot cowboy you had a one-night stand with turned out to be the person you interview with for a job three days later?

Chase Walker is a World Champion saddle bronc rider. He’s a rodeo cowboy through and through. A man who loves playing the field and sees no reason to settle down. Until he meets Ella Slade.

I knew Chase from the first book in the Texas True series, Texas Forged. Ella was brand new to me. So I had to do some research on ranch managers to find out what type of person she was.

I get to know them by writing their story. This means that sometimes I have to go back and revise the first of the book since that was written before I knew them.

When Chase and Ella meet again for the first time after their one-night stand.

Ella drew in a deep breath, straightened her shoulders and rang the doorbell. The door
opened and a man stood there staring at her in surprise. Tall, dark curly hair, sinfully beautiful blue eyes. A mouth that could kiss a woman blind. And had. His left arm in a sling. Chase. “You’re—What are you doing here?”

“I live here.” He looked her up and down and shook his head. “And you must be Ella…Slade.”

He cracked a smile. “A simple yes will do.”

I had to research how they get the horses in the chute and how they put the saddle on them, plus how the horse bucks. Lots of videos!

She ought to be good for one hell of a score, he thought as he climbed into the saddle. Sugar Lips, naturally, didn’t cooperate. Why would she? It had taken twice as long as usual to get her saddled. She tried to ram him every which way in the chute, but he finally got adjusted without more than a few bumps and bruises. Making sure he was set, he gripped the rope, and said, “Let her rip.”

Sugar Lips shimmied out of the chute, threw a good-sized buck and then holy hell broke loose. She twisted and turned; she corkscrewed and bucked. Then she dropped—stiffening her front legs and double kicking with her hind legs, with a body twist thrown in, and Chase went sailing through the air and smashed into the dirt. He lay there stunned, gasping in pain, no more capable of getting up than if he’d had a cement truck parked on his chest.

Sugar Lips stepped on his chest. And that’s all she wrote.

I want them to have fun and enjoy it. And realize that we don’t have to let our past define our future.

To enter Giveaway: Please complete the Rafflecopter form and Post a comment to this Q: What is your favorite thing about cowboy stories?

Chase Walker knew that horse was trouble the minute he saw her. Sugar Lips—what a name for a saddle bronc—wasn’t new to the pro rodeo circuit but he’d never drawn her before. He’d heard rumors about her. Lots of them. She was wily. Unpredictable. She didn’t have one or two moves. She had too many to count. And she could throw them all into an eight-second ride.
She ought to be good for one hell of a score, he thought as he climbed into the saddle. Sugar Lips, naturally, didn’t cooperate. Why would she? It had taken twice as long as usual to get her saddled. She tried to ram him every which way in the chute, but he finally got adjusted without more than a few bumps and bruises. Making sure he was set, he gripped the rope, and said, “Let her rip.”
Sugar Lips shimmied out of the chute, threw a good-sized buck and then holy hell broke loose. She twisted and turned; she corkscrewed and bucked. Then she dropped—stiffening her front legs and double kicking with her hind legs, with a body twist thrown in, and Chase went sailing through the air and smashed into the dirt. He lay there stunned, gasping in pain, no more capable of getting up than if he’d had a cement truck parked on his chest.
Sugar Lips stepped on his chest. And that’s all she wrote.
When he came to he was being carried out of the arena. He tried to tell them to leave him the hell alone, that he could walk out under his own power, but he couldn’t get any words out. He found his voice when someone grabbed his left shoulder and he cut loose with every cuss word he knew. Damned if he didn’t nearly pass out again.
Two hours later he was at the hospital waiting for test results and stewing about the possible end to his season. Chase hadn’t been thrown so quickly since he first learned to ride broncs. He’d won the freaking Saddle Bronc World Championship for the last two seasons and was well on his way to winning this season’s, and that she-devil had thrown him as easily as if he’d been a rank amateur.
Dr. Mathews, an older man who’d been treating rodeo cowboys and cowgirls for close on forty years, and who Chase had known for at least ten of them, entered the room just then. “Well, Chase, I see you haven’t managed to kill yourself yet.”
“Ha-ha. What’s the verdict, Doc?” Maybe it felt worse than it was. Maybe his shoulder was simply dislocated and the doc could pop it back in and he’d only be out for a couple of weeks.
“’Bout the only thing you didn’t break is your head, but since you’re such a damn hardheaded cuss, that’s no surprise.” He put a film on the light box and flipped on the light. “You’ve got a fractured shoulder.” He pointed to an area that even Chase could see was bad. “You’ll need surgery for it. Then,” he said, exchanging one film for another, “there’s two cracked ribs. Lucky neither one punctured your lung.”
Shit. He’d had broken ribs before. They hurt but he could come back from them. Worst case he could strap them and ride. But a broken shoulder and surgery… “How long before I can get back, Doc?”
The doctor turned and stared at him. “You cowboys are all the same. No more sense than God gave a goat.”
“Come on, Doc. What’s the time frame?”
“Ten weeks. Twelve weeks. Or you could be out for the season.”
“The season? No way.” Ten or twelve weeks was bad enough, but the doc could be overestimating how bad it was.
“We’ll see. Them’s the breaks, cowboy.” He laughed like he’d said something uproariously funny.
Ha. Ha. Out for the season? No way in hell.

Can they turn one spectacular night into a lifetime of love?

After a disastrous ride forces world champion saddle bronc rider Chase Walker back to his family’s ranch to recuperate, he’s happy to distract himself for a night with a mysterious, gorgeous woman. It should have just been a one-night stand, but she’s unforgettable.

Thanks to her cheating ex-fiancé, Ella Slade is done with rodeo cowboys…until she meets a sexy cowboy who catches a thief who stole her purse. What harm can one night of indulgence do? A lot, apparently, because when she arrives at her interview for a ranch manager job, Chase turns out to be her prospective boss. She’s adamant she won’t mix business with pleasure, but Chase suggests a deal—Ella takes the job, and they pretend that night never happened.

The longer they work together, the harder it is to pretend. Chase knows he’s falling for his midnight lover, but can he convince Ella to risk her heart again?

Eve Gaddy is the award winning, national bestselling author of forty novels. Her books have sold over a million copies and been published in many countries and several languages. She writes contemporary romance, romantic suspense, romantic mystery, and a bit of paranormal romance as well.

Eve’s books have won and been nominated for awards from Romantic Times, Golden Quill, Bookseller’s Best, Holt Medallion, Daphne Du Maurier and many more. Eve was awarded the 2008 Romantic Times Career Achievement award for Series Storyteller of the year, and was nominated for a Romantic Times Career Achievement Award for Innovative Series romance. She loves her family, books, electronics, the mountains, and East Texas in the spring and fall. She also loves a happy ending. That’s why she writes romance.
Website | Facebook | Twitter | Instagram | GoodReads |

« QOTD Spotlight and #Giveaway: THE SEAT FILLER
Spotlight & Giveaway: Summertime on the Ranch by Carolyn Brown »