Hi Terry and welcome to HJ! We’re so excited to chat with you about your new release, You Had me at Wolf! 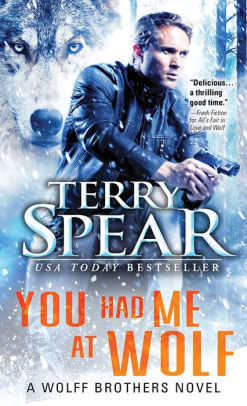 Blake Wolff and his brother and sisters run the Wolff Timberline Ski Lodge when everything goes wrong for him—his dog bolts after a rabbit while on a walk, he struggles with a snowblower—all witnessed by one pretty she-wolf, Josie Grayson. Not only does she get a kick out of all his disasters, she kisses him in the lobby as if he were her lover, not family fare at all. And he doesn’t even know her.
Josie has a mission: prove a man staying at the lodge has committed a fake suicide to obtain the insurance money, but he can be considered dangerous, and her human PI partner has fallen ill to high-altitude sickness. That’s where Blake Wolff comes in. The sexy wolf who was having so much trouble this morning and she thought he could use a hug, not to mention she really needed to pretend she was here with a lover, and not doing surveillance of the suspect. Except kissing the wolf is bound to cause even more conflict…or more kissing, if the wolf is willing, and he seems very…willing. She still has a job to do. And he’s her new mission.

Nicole paused to watch a man dressed in a gray ski jacket, hat, pants, and snow boots struggling to start a snowblower to clear a walkway to the parking lot from the Timberline Ski Lodge. She was conducting surveillance for her investigation into a fraudulent life insurance claim, but that was less interesting than the man before her.
What intrigued her was that he was the same hunky guy who’d been walking a Saint Bernard in the snow earlier this morning. The dog had taken chase after a rabbit and dragged the man off on a wild jaunt, with him hollering, “Rosco, heel!” Which hadn’t had any effect whatsoever. Rosco had been hell-bent on catching the rabbit, and nothing would keep him from his mission. That was the last she’d seen of the dog and the man, who had disappeared from sight through the snow-laden trees. She wondered if the guy had ever reined the dog in or if the dog had finally given up on his own.
Now the lupus garou seemed to be having trouble with his snowblower.

For me, the fun is in showing someone who is struggling in front of the heroine and she wants to help him, but can’t help being amused. His day isn’t working out well at all, and the heroine keeps catching him at it.

Half the fun in writing the books for me is finding all kinds of fun facts that give the true character. As much as it doesn’t seem like it really could happen, it does.
I hope you have fun reading the story!

1. You never know when unfinished business can finally be accomplished with great reward.
2. Sometimes when things don’t work out, it opens doors for new beginnings.
3. Helping others can brighten your world in ways you never thought possible.

Giveaway: A Paperback copy of You Had me at Wolf by Terry Spear

To enter Giveaway:e complete the Rafflecopter form and Post a comment to this Q: Have you ever been in the middle of something that seems to be a disaster for you, but something good comes out of it?

The hot, powerful Wolff brothers have moved to the outskirts of Silver Town and opened a ski lodge. They’ve always wanted to live in a wolf-controlled area, and now they have their chance. They’re settling in for a quter, when their lives suddenly become way more exciting than they’d ever planned.

Private Investigator and gray wolf shifter Josie Grayson is hot on the trail of a dangerous criminal hiding out at the ski lodge when her partner takes ill and must leave her to pursue the mission alone. Blake Wolff steps in—he can’t resist the allure of this brilliant and focused she-wolf whose presence awakens a long dormant yearning in his heart.

As pursuit of their quarry up, Blake has a mission of his own…to convince Josie that there’s more to life than work…and that she’s his perfect mate.

USA Today bestselling author Terry Spear has written over forty paranormal romances. Heart of the Wolf was named a Publishers Weekly Best Book of the Year and Billionaire in Wolf’s Clothing was a Romantic Times Top Pick. A retired officer of the U.S. Army Reserves, Terry also creates award-winning teddy bears. She lives in Spring, Texas.

« REVIEW: Something in the Air by L.H. Cosway
Spotlight & Giveaway: Savage Burn by Lisa Renee Jones »

37 Responses to “Spotlight & Giveaway: You Had me at Wolf by Terry Spear”