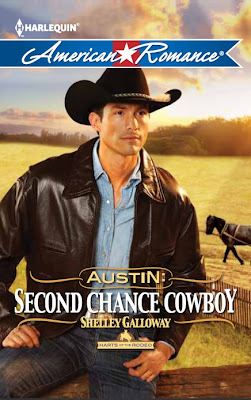 No man should look as good as Austin Wright. Especially when that man is a suspect in a string of burglaries. And, Sheriff Dinah Hart can’t afford the distraction. Roundup’s thieves are growing bolder and Thunder Ranch’s prize stallion, Midnight, is still missing, putting the Harts’ entire livelihood at risk. Dinah needs to focus, because she’s worked too hard to earn the town’s respect just to throw it away on a fling.Austin knows he’s got a bad reputation. He’s been following his father’s self-destructive footsteps for far too long. Now he’s finally ready to take the first step toward fixing his life, and convincing people, especially Dinah, that he’s changed.
But when Austin discovers an unexpected connection to Midnight’s disappearance, will Dinah see him for the man he was, or the one he’s trying to become?

In book four of the Harts of Rodeo Series we come face to face with drop dead gorgeous bad boy Austin. He is the always getting drunk and sleeping with a string of woman ,waking up the next morning and not being able to recall so much as the woman in his bed’s name.

He does however come to the point in his life where he wants to change but doing just that proves much harder as how does one change and at the same time keep your dirty little secret under wraps. Dinah who is sister to brothers Aiden and Colton (from books one and two) has worked hard to prove her worth in this small town ,being a female Sheriff and a woman with needs at the same time is a tough job.

And when she encounters the man that is able to for-full those needs she is more than a little torn between falling into bed for the best lovemaking ever and upholding the law. I really liked the book,reading about the amount of effort it takes to overcome one’s demons and the choices that some need to make in order to bring balance to their lives was beautifully captured by the author.

The author very nicely incorporated the characters from the previous books and also made my curiosity take off as to what lies ahead in the next book. The book also had some very delicious,funny and witty comments flying between Dinah and Austin that was simply delightful!

“He couldn’t resist the pull of satisfaction he felt. Dinah Hart didn’t bed her will to anyone ……”