Today it is my pleasure to Welcome romance author Gina Conkle to HJ!

Today, Gina Conkle will be unleashing edits from her book Norse Jewel

Hi, thanks for taking a look at this deleted love scene of Norse Jewel. 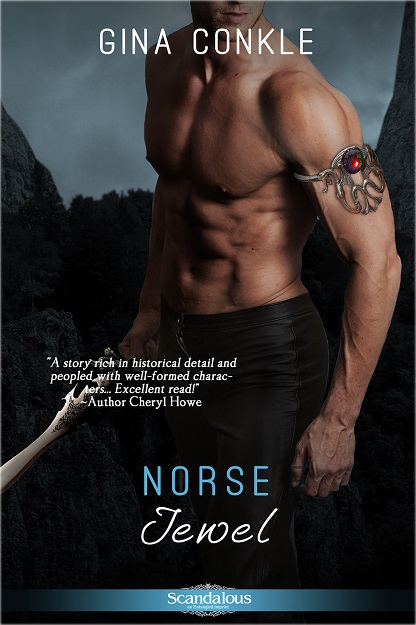 Set in AD 1022, Norse Jewel tells the tale of a once free damsel in distress. Helena was stolen into slavery by marauding Danes and needs to get away quickly. Her savior comes: Hakan, a Viking chieftain, who wants to live a peaceful, farmer’s life. He buys her, but the fair thrall turns his life upside down. She teaches the stoic warrior about love, yet seeks her freedom at every turn. Much changes that Norse summer. No one wants Hakan to lay down his sword. Old deceits come to light. Sacrifices are made. And the Viking finds he can’t let go of the woman who should go free.

Stoic to the core, the wolf-eyed Hakan has a strong sense of honor driven by his past. Helena is a warm-hearted woman of courage. She adapts to her new home, winning over many with her kindness and quick intelligence. In the end, her skills with people and as a weaver of rare talent turn the Viking warrior’s world upside.

Norse Jewel was originally 95,000 words. The editor required me to shorten the story to 70,000 words. I accepted this. So, story elements stayed the same but were rearranged. My one hot scene was chopped in favor of something mild and shorter. There was another sensual river scene that I kept but pared down (not listed here).

The final Norse Jewel story has plenty of sexual tension with a mild sex scene at the end. But, the final manuscript was turned in at exactly the 70,000 word limit.

In this scene Hakan receives news of the kingdom’s upheaval on his wedding night in a foreign land. Vikings in Uppsala honored a ninth year custom or sacrifice – same as depicted on season 1 of History Channel’s “Vikings” show. In true history (and in my book), King Olof wanted to stop the practice. Rebellion came in part because of that. In the original story, Hakan, a newly married man, wants this night with Helena before he travels into battle.

Stolen by the Danes, Helena longs for freedom, but a wolf-eyed Viking buys her, taking her to the far, icy north. Hakan wants to lay down his sword and live a quiet farmer’s life. Betrayal left him cold to the wiles of women, yet his heart slowly thaws to his clever thrall. She lures him with kindness and laughter, but happiness is short-lived as old deceits rise. War erupts…a kingdom’s in the balance. Hakan’s loyalties are tested, and soon both master and thrall must answer the question: What is the price for love?
Book Links:

Gina’s a lover of history, books and romance, which makes the perfect recipe for historical romance writer. Her passion for castles and old places (the older and moldier the better!) means interesting family vacations. Good thing her husband and two sons share similar passions, except for romance…that’s where she gets the eye roll. When not visiting fascinating places, she can be found in southern California delving into the latest adventures of organic gardening and serving as chief taxi driver.
Website | Facebook | Twitter |

Giveaway: I have some swag (pens) + a $10 Starbucks gift card for US/Canada only.

To enter Giveaway: Please post a comment to this Q: Please tell me what line or lines stood out to you the most. What about them affected you?

Please note: This contest will close on Friday July 18 2014 at 8:59 PM (PT) and the winner(s) will be notified via email and on this Post. Winner(s) will have 48 hours to respond to the e-mail before a new winner is selected. All entrants must adhere to HJ’s official giveaway policy.