Today it is my pleasure to Welcome romance author Heidi Rice to HJ!

Today, Heidi Rice will be unleashing edits from her book Too Close for Comfort

Thanks Sara, it’s great to be here. 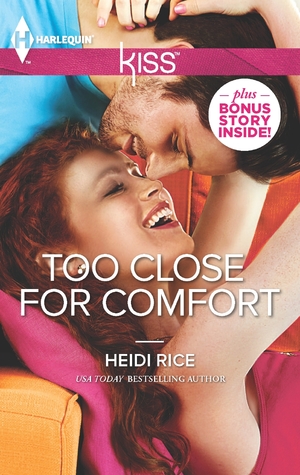 Too Close for Comfort was my first Harlequin KISS novel, but actually the fifth book in a series of interlinked stories. Zane Montoya is an impossibly gorgeous Mexican American private detective who appeared briefly as the best friend (and unacknowledged half-brother) of my One Night So Pregnant hero Nate Graystone. Iona McCabe is a Scottish wildlife in LA to catch the man who had swindled her father out of thousands of pounds…. Or at least that’s how it ended up.

This deleted scene involves how the book originally started. But I ended up having to re-write the opening third of the book, to give it more spark! Also in a 50k book I didn’t have time to have my heroine Iona spending the first three chapters getting over her arsehole of an ex-boyfriend, so I turned Brad Demerest into a con-man, who Zane has under surveillance when he spots Iona breaking into the guy’s motel room… But prior to that, well…. Read the original opening and see.

If you want to read how the book ended up starting… You can check out Amazon’s look inside the book feature here: http://www.amazon.co.uk/Close-Comfort-Mills-Boon-Modern-ebook/dp/B00C1DTMAS#reader_B00C1DTMAS

Zane Montoya grinned at the snotty comeback glad to see the aching vulnerability no longer shadowing the girl’s golden eyes.
‘Crummy or not, it pays the bills,’ he replied, unoffended. She was entitled to be mad at men right about now, so he didn’t mind taking one for the team — especially as it made the rich caramel sparkle with temper instead of devastation.
Her boyfriend wasn t simply a jerk. He was a total SOB, but then La-La Land and the movie business was full of them, so that was no big surprise. What did surprise him, though, was that he’d broken protocol and engaged the girl in a personal conversation. He had a strict rule about making personal observations to clients. Not only was it unprofessional, but it could easily come back and bite you on the butt. Especially, if the client happened to be female.
In his experience, women who hired private detectives to spy on their loved ones tended to fall into two categories: bored socialites who didn’t trust their partners, or bored socialites who’d been cheated on and were looking to get even. And he’d been hit on often enough by both types to know that encouraging them in any way was never a good idea.
But this girl didn’t fit the mould. She’d looked crushed when he’d handed over the photos. Either that or she was a really good actress. But he didn’t think so. After ten years in the LAPD— five in Metro and five as a detective — he’d interrogated everybody from jaywalkers to embezzling accountants, and he knew how to read people. He’d bet his left nut this girl was as devastated as she’d appeared to be.
He’d seen the sheen of unshed tears, the flushed skin on her pale cheeks going vermillion as she’d studied Dean’s photos. For one uncomfortable moment he’d thought she was going to cry, her fingers shaking like she had the DTs, but then she’d pulled herself back from the brink and blinked away any trace of emotion.
And something had fluttered under his ribcage that didn’t feel all that professional.
Which was weird. He didn’t usually have a problem remaining detached. When you grew up with a mother who was only sixteen years older than you and you’d been chasing women, and catching most of them, since you were fifteen, displays of female emotion didn’t phase you.
But there was something about Iona McCabe’s stoicism — and those sultry eyes, so large and wary in her small face — that had phased him.
The furious urge to go find her boyfriend and kick the living crap out of him had come first. But that had been fairly easy to explain — he despised men who hurt women, probably because he’d been fathered by one who had made it his life’s work.
More troubling had been the desire to wipe the devastation away.

Rescued by a bone-meltingly handsome stranger!

After a run-in with a Californian con-man, Scottish Iona MacCabe has no money and nowhere to go. She quickly discovers LA can be a very unfriendly city without tons of hard cash… Millionaire security expert Zane Montoya can hardly leave a pretty Scottish tourist at a dodgy motel to fend for herself. His long-lost chivalrous side takes over: he turns on the legendary Montoya charm and whisks Iona away to upscale Monterey.

Independent, wilful Iona might be spitting daggers at being rescued, but that doesn’t stop the sexual heat between them reaching scorching point!

Zane’s used to keeping all his women at arm’s length, and Iona’s way too close for comfort – but Zane only realises his long-held emotional detachment is at risk once it’s too late…
Book Links:

USA Today bestselling author Heidi Rice is married with two teenage sons (which gives her rather too much of an insight into the male psyche). She loves her job because it involves sitting down at her computer each day and getting swept up in a world of high emotions, sensual excitement, funny feisty women, sexy tortured men and glamourous locations where laundry doesn’t exist … Not bad, eh. Then she gets to turn off her computer and do chores (usually involving laundry!)
Website | Facebook | Twitter |

Giveaway: I’d love to give away a copy of Too Close for Comfort (internationally available)

To enter Giveaway: Please post a comment to this Q: So, if you’ve had a chance to read both openings… Which do you prefer?

Please note: This contest will close on Friday June 13 2014 at 8:59 PM (PT) and the winner(s) will be notified via email and on this Post. Winner(s) will have 48 hours to respond to the e-mail before a new winner is selected. All entrants must adhere to HJ’s official giveaway policy.

« Caption this Cover: What in BLAZES?!
REVIEW: Sinful Surrender by Elisabeth Naughton »

20 Responses to “Edits Unleashed & Giveaway: Too Close for Comfort by Heidi Rice”