In A Fire in the Blood by Amanda Ashley, a fortune teller warns a teenaged Tessa that a man will enter her life to protect her. Years 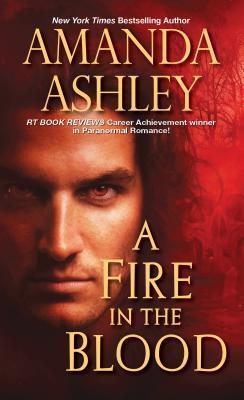 later, Andrei, a vampire enters her life, vowing to protect her from other vampires who are after her blood, including his wife, Katerina. Suddenly Tessa is thrown into a world she didn’t believe even existed, a world filled with vampires and shape-shifters.

I felt there were several things that were unresolved in this book. First off, why did Tessa have magical blood that attracted vampires? Yes, it was briefly mentioned that there were mystical family members in her lineage, but it doesn’t explain why Tessa is the only one in her family that has this issue. There are no vampires chasing after her parents, only her.

Then there’s the fact that Andrei is a vampire, yet he can change into a werewolf. I was a bit confused about that. It wasn’t explained how he was able to do that and it just came out of nowhere. It wasn’t mentioned he even had that ability until he actually displayed it.

There’s also Luke, who is the boyfriend of Jilly, Tessa’s best friend. He’s a vampire hunter who initially doesn’t have a good idea of how to identify vampires. All of a sudden he gets a feeling and suddenly he can differentiate between humans and vampires. What brought about the sudden change? I couldn’t tell you.

I had mixed feelings about all the characters in this book. I liked Andrei and how protective he was of Tessa and her friends, even Luke, but at the same time he comes across as weak, not being able to come up with a way to deal with Katerina. Jilly, while she probably had Tessa’s best interests at heart, comes across as someone who wants things to happen the way she thinks they should. Instead of supporting Tessa’s desire to be with Andrei, she often comes across as disapproving of the pair, although she was all for their relationship before learning of his true nature. Tessa is wishy-washy when it comes to whether she should be with Andrei or not.

I was disappointed with the confrontation between Tessa and Katerina. It had been building up the whole book but was over in a matter of seconds. I thought it could have been drawn out a little more. As it was, the way it happened was anti-climatic and a let down.

While I liked the concept of A Fire in the Blood, I felt it could have been executed better. There were just too many things that were unexplained or unresolved, which took away from my overall enjoyment of the story. The target audience for this book would be those readers who enjoy paranormal books, especially those featuring vampires.

-I see a man. He is old. Very old. He will come into your life in a moment of danger. He will watch over you and protect you.- The gypsy’s hand gripped Tessa’s tighter. -He will bring you death, – she whispered, her voice like the rustle of dry leaves. -And life.-
Ten years later, when Andrei Dinescu saves Tessa from a vicious attacker, she has no idea that the handsome stranger the gypsy fortune teller predicted is not a hunter but a seven-hundred-year-old vampire. Darkly powerful, unbelievably compelling, he is obviously pursuing Tessa, but is it her love he’s after or her blood?

4 Responses to “REVIEW: A Fire in the Blood by Amanda Ashley”