There’s a fine line between love and hate. I’ve heard that a thousand times, but never was it more appropriate than in A Shadow of Guilt by Abby Green. Book three in the Sicily’s Corretti Dynasty series, this installment is about two people whose lives took a turn for the worse, one night when a young man died. 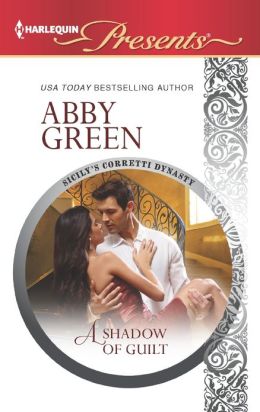 Gio Corretti has blamed himself for seven years. For allowing his best friend to get on a wild horse he was insisting he could break. Gio had let his arrogance get the best of him instead of putting down the stallion after it killed a jockey. When he couldn’t talk his friend Mario out of riding him, he watched in horror as the horse took another life.

Valentina Ferranti has memories of that night. The night Gio promised he’d bring her brother home safe and sound. The night she raced to the hospital beside her anxious parents. The night she saw Gio standing in the hallway outside the ER doors – and knowing her brother had been taken away. And it was all his fault. Even though he had no right to be at Mario’s funeral, there he was. She couldn’t stop herself from the confrontation – but when her parents pulled her away she was ultimately grateful she would never have to see him again.

Seven years later, Valentina is trying to make a name for herself as a caterer. It was all she’d ever wanted to do, since cooking with her grandmother in the family kitchen. When Carmela Corretti hires her for a very high-profile wedding, she can’t turn it down. Besides, Gio separated himself from the rest of the Correttis long before she’d known him – at the age of 16, so showing up at his cousin’s wedding would be the last thing she’d need to worry about.

Giaccamo, when called by his mother, felt the guilt of not coming home in ages. His family had gone through many scandals and struggles since he left, but he still felt an obligation to make an appearance after such a long time. He was shaken to the core to see Valentina in tears outside the wedding reception. He learns that his Aunt Carmela has refused to pay her even though she is still expected to serve the guests that remain. After all, the wedding never actually took place, so she felt she had a right to service without payment. Perhaps this is where Gio can make some kind of amends to the family he wronged so egregiously.

Whether in passion or hatred, the tension between Valentina and Gio was palpable. The story was written like a dance, with one character taking a step back while the other pushed in. The story was heartwrenching at times, but not overly dramatic. Well worth reading.

Publication Date: June 18, 2013 | Series: Harlequin Presents (Book 3154)
Driven and Determined: To Forgive a CorrettiValentina Ferranti has always blamed Gio Corretti and his reckless behavior for her brother’s death. The last time she saw Gio she slammed the door on him and her youthful infatuation.Now, broke and with her name slandered by the infamous Carmela Corretti, Val needs help. There’s only one person she can turn to…the cold, inscrutable man from her past whose green eyes flash with guilt, regret and a passion that calls to her.

Valentina may have had the strength to ask for help, but does she have the willpower to resist all that entails?

2 Responses to “REVIEW: A Shadow of Guilt by Abby Green”