Claimed for the Greek’s Child by Pippa Roscoe is the second story in her Winner’s Circle trilogy, about 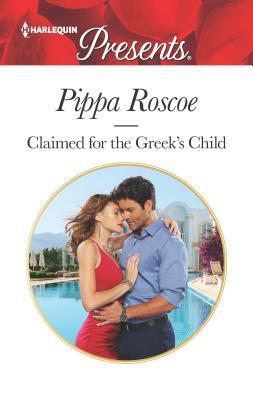 three friends who race horses together and find their bachelorhood days numbered as they meet women who challenge and delight them.

Dimitri Kiriakou spent one night in a small Irish bed & breakfast where he met and slept with owner Anna Moore. But after their night together, Dimitri went to America to face the consequences of betrayal at his family’s bank and to take the fall for an embezzlement blamed on him. Spending a year and a half in jail before his innocence was proven, he didn’t know that Anna had conceived his child, a girl named Amalia. When Anna’s mother Mary, an alcoholic, tries to blackmail Dimitri, he mistakenly believes she’s the woman he slept with, and heads to Ireland with the goal of claiming his child.

Anna is stunned when Dimitri shows up on her doorstep with plans to remove her daughter. When he realizes that it was Anna’s mother and not Anna who tried to blackmail him, he’s determined to do right by his child, including keeping mother and child together. He arranges everything so that Anna and Amalia can return with him to Greece. In fact, he wants to marry Anna so that he can be a full time father to their daughter. But while he can guarantee love for his child, he’s not so sure he can open his heart to Anna. Can this new family unit find a happy ever after together?

I enjoyed this sexy reunion romance! When Anna and Dimitri met they were both suffering with their own private hurts, and their night of passion was a way to forget their troubles. Amalia’s birth changes everything for Anna and she did try to get in touch with Dimitri when he was found innocent of the charges but no one believed her. It’s definitely not the best reunion for them, but Dimitri is sincere in wanting to do what’s best for Amalia. His reasoning for marriage over a joint custody relationship comes directly from his own personal experience. His mother died in a car accident when he was seven and she’d raised him as a single mother so it took two months before his real father was found. He’s determined that if something should happen to him or Anna, his daughter would never know that pain.

Most of the story takes place in Greece on Dimitri’s beautiful private island as Dimitri and Anna connect as co-parents, and then once married, as lovers. They share some very sensual scenes as they reunite on an intimate level. Getting to know each other means sharing their pasts, and Dimitri soon finds Anna to be an empathetic listener who helps him restore some of the relationships within his own family. Watching Dimitri get to know his newly discovered daughter is sweet.

There are a few obstacles to overcome in order for Dimitri to realize how lucky he is to have Anna and Amalia in his life. The horse racing part of this story is a minimal secondary storyline, but there are some scenes between Dmitri and his two best friends Antonio and Danyl that show their closeness. There’s also a lovely epilogue. If you enjoy secret baby romances with marriages of convenience that turn into the real thing, I recommend this story!

The billionaire is back… And he will legitimize his secret heir!
Finding himself at Anna Moore’s door after tracking down the mysterious beauty is the least shocking part of Dimitri Kyriakou’s day. Because discovering the consequence of their one spectacular night has floored him! To secure his child, ruthless Dimitri must make Anna his wife. But the only thing harder than convincing Anna to be his convenient bride is trying to ignore their red-hot attraction..

« Spotlight & Giveaway: Passion and Ink by Naima Simone
REVIEW: The Good Ones by Jenn McKinlay »

2 Responses to “REVIEW: Claimed for the Greek’s Child by Pippa Roscoe”