Colton Manhunt by Jane Godman  continues the Coltons of Mustang Valley saga. In this story one of 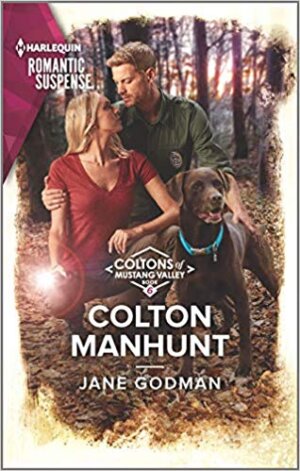 the main characters, Spencer Colton is a Colton cousin. He feels sorry for his cousins but isn’t directly affected by their troubles.

Katrina Perry’s twin sister Eliza is missing. At least Katrina believes so. She isn’t answering calls or texts. The last she heard from her a couple months before this Eliza said her building was destroyed during the earthquate Mustang Valley suffered and she was staying at the Affirmation Alliance Group ranch. Time to try to find Eliza and Katrina’s first stop in her search is the Affirmation Alliance Group’s ranch ten miles outside of town. Katrina drives out to the ranch and asks about Eliza. She gets vague answers about Eliza being there for a couple days and leaving and bad vibes for her effort. As she is leaving she sees her sister’s dog Dobby.

Now she is really concerned as she knows Eliza would never leave Dobby behind. Yes, Eliza has suffered from drug addiction but she swore to Katrina that she has been clean for a year the last Katrina heard from her. Yes, Eliza is very irresponsible and doesn’t like Katrina to interfere in her life but Katrina is even more concerned since finding Dobby. Katrina scoops up Dobby and leaves the AAH ranch and heads to the police station to report Eliza missing. There she runs into, literally runs into, K-9 Sargeant Spencer Colton. He agrees to look into the case.

Spencer Colton, along with his K-9 partner Boris, take their job very seriously. Spencer is working overtime to try to solve the case of the shooting of Colton patriarch Payne Colton. Adding this missing persons case to his workload isn’t going to leave him much time to eat and sleep. But Katrina is so very appealing and he feels he has to help her. He is not going to act on his attraction to her though… He doesn’t want to face the possibility of more loss.

Colton Manhunt by Jane Godman continues the Coltons of Mustang Valley saga. In this story one of the main characters, Spencer Colton is a Colton cousin. He feels sorry for his cousins but isn’t directly affected by their troubles. I liked Ms. Godman’s characterization of Spencer and Katrina. They have issues to overcome yet get to the point where trust is possible. As the danger to Katrina grows Spencer feels more determined to keep her safe. There is a lot of back and forth between the two before their personal conflicts are resolved. I am enjoying this Colton series very much. Next up is Colton’s Deadly Disguise by Barb Han.

She’ll do anything to find her missing sister.

Only a Colton cop can crack this case.

The last thing K-9 Sergeant Spencer Colton needs is another routine missing-persons case. But Katrina Perry is insistent on finding her twin sister—at all costs. And as things become anything but routine, so do Spencer’s feelings for Katrina. Someone will stop at nothing to get Katrina out of the way, though. And only Spencer has a chance of keeping her safe…

One Response to “REVIEW: Colton Manhunt by Jane Godman”