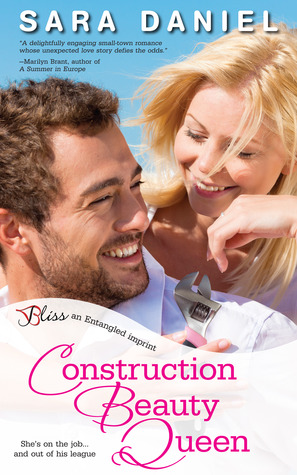 Chicago socialite Veronica Jamison is determined to shake off her sheltered lifestyle and overbearing parents. She heads to her grandfather’s small town of Kortville, ready to roll up her sleeves and work for the family construction business. She’ll prove her worth, even if it means answering to the company’s ruggedly handsome co-owner, Matt.

Matt Shaw just wants to run his business, spend time with the niece he’s raising on his own, and give back to the townspeople who have stood by him. Managing a spoiled-rotten princess he knows he’ll never be good enough for? Not part of his plan. But as he gets to know Veronica, he learns there’s more to her than her beautiful looks and designer clothes. She’s got a heart as rich as her background.

With the quirky townspeople rallying against Veronica inheriting her grandfather’s business, it’s up to Matt to try to drive her out of town. But how can he, when instead she’s driving her way into his heart?

Veronica is a Chicago socialite determined to make a life of her own. Her parents have always ruled her life and are now trying to force a marriage on her to help her father with a merger. But she doesn’t want to marry Trevor, she wants to make use of her MBA.

After asking her grandfather for advise, Veronica moves to Kortville where her grandfather lives to work as a construction worker for a month and prove herself so she can then run his distribution warehouse.

Things are not always as they seem. People in town don’t appreciate her being there, and Matt the owner of the construction company is not happy to have her work for him either. Now she has to win over a whole town and prove herself not only to her grandfather but also to Matt, who will do just about anything to get rid of her in the beginning.

I found this to be an emotional story where Veronica is trying to fulfill her dreams against everyone’s will; if you’re like me and get so into the character’s feelings you might want to have a tissue or two handy. Construction Beauty Queen is definitely worth the read.

« Review: Take it Like a Vamp by Candace Havens
Review: Honorable Rancher by Barbara White Daille »