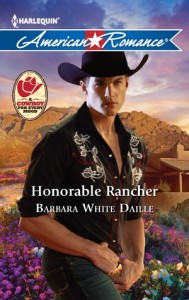 The hero of Flagman’s Folly has been gone more than a year. But he still stands between Ben Sawyer and what he desires most—Dana Wright, the love of Ben’s life.

When soldier Paul Wright left for the last time, he made his best friend promise to look after his wife and kids. Ben—good, steady Ben—is honoring that promise. And it’s burning him up inside.

Because Dana is shutting Ben out. She wants him—so much—but she can’t afford to give in. If she does, she’ll spill her secret, and the betrayal will hurt everyone she cares about—her children, who loved their daddy; her town, which loves its hero; and Ben, who loved his friend. She’ll do anything to protect her secret—even give up her second chance at happiness.

Honorable Rancher is a heartwarming tale of friendship and second chance at love.

Dana and Ben grew-up together in Flagman’s Folly….Ben has loved Dana since they were kids, but when she married his best friend he had to give up his dream of love and family with Dana.

Dana is now a widow struggling to raise three small kids after he husband Paul was killed serving the country…. Having been hurt by her late husband Dana is determined never to rely on a man again, but Ben makes that task mighty difficult.

Ben made a promise to Paul before his last tour of duty to look after his family, he is honor bound to look after and care for Dana…

Dana and Ben are attracted to each other but Dana’s need to be independent and Ben’s need to help Dana constantly have them butting heads. Dana does not want to be an obligation to Ben.

The characters in this book were well rounded, I really Really liked Ben; he was just perfect. The push-pull relationship between Dana and Ben will keep you intrigued to the end.

If you like small town settings, sexy cowboys and are a fan of second chance romances then Honorable Rancher is definitely a must read.