In Dark (Dangerous Web #2) by Aleatha Romig, Reid Murray would move heaven and earth for his 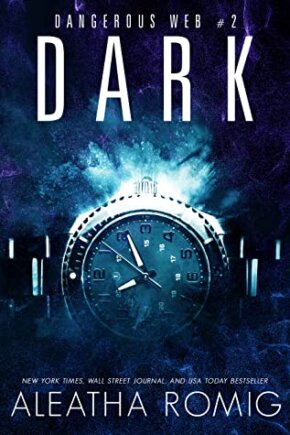 beautiful wife Lorna. And he did just that when she and another woman in their close circle were abducted recently, not resting until he tracked down every lead to their whereabouts. Now with Lorna safe at last in their high-rise compound, Reid’s new mission becomes finding out who was behind the abduction. His wife might not want him to put himself at risk, but he knows he won’t be able to rest until he knows revenge has been served. And that Lorna will never be put in harm’s way again.

The title really says it all with book two in Aleatha Romig’s Dangerous Web trilogy. Dark was suspenseful, had an intricate storyline tangled up with her other trilogies, but through it all had me believing that Reid and Lorna’s complete and total love for each other would conquer all.

‘Throughout the years, Reid’s love had given me what I never realized I needed or what as a child I could not have even imagined existed. In return, my love for him had grown each day.
Together, we were unstoppable.’

It was interesting to learn so much more about both Lorna’s and Reid’s tough backgrounds. It won’t be easy for some readers to get through Lorna’s flashbacks. And for those who do read those passages, I can almost guarantee tears will be shed. But it built a foundation to show exactly how strong Lorna was–and still is–with everything she has been through in her lifetime. Including being recently held captive.

Reid was such a commanding presence in this story. There was a darker edge to his job with Sparrow but he was a truly loyal and caring guy. So it felt…not quite shocking, but a little out of character for Reid to have such fury over what happened to Lorna. At the same time, it felt like the right reaction given the situation. And I thought Romig showed him battling back the rage he felt in a realistic way while he was also there for Lorna, being the compassionate man she needed. After the way this book ended, I have a feeling in the final installment, Dawn, Reid will see some major changes in his life. It should be interesting to see where Romig takes his and Lorna’s journey.

A fast-paced, edge-of-your-seat romantic suspense that had plenty of surprises, Dark was a thrilling story that Aleatha Romig fans will undoubtedly enjoy.

“Maybe you have to know the darkness before you can appreciate the light.” ~ Madeline L’Engle

Darkness has fallen upon the Sparrow world.
What seemed secure was breached, and what was assumed unattainable is possible.
In this dangerous underground world, we Sparrows took our power by force. As dusk gave way to dark, we Sparrows are once again determined to use any means necessary to recover what is ours, secure our stronghold, and defeat those who appear unconquerable.
The gauntlet has been thrown.
We will not retreat.
Darkness be damned. It is time for triumph.
I am Reid Murray.
For my wife and my brothers-in-arms, nothing, not even darkness, will stop the Sparrows from victory.

DARK is book two of the DANGEROUS WEB trilogy that began in DUSK and concludes in DAWN.
Have you been Aleatha’d?