In Drawing the Line by Kimberly Kincaid, Serenity Gallagher has just walked into her restaurant when she finds one of her cook injured on the kitchen floor following a break in. She wants to do everything she can to help her friend, but the 911 operator wants her to get out before the attacker comes back. Only she believes he is gone when he suddenly comes back and tries to kill her. 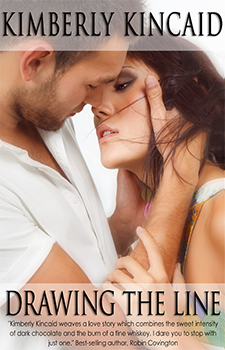 Detective Jason Morgan has been eating every Wednesday at Mac’s with his sister, so he cannot help but be upset that the place has become a crime scene. Even more upsetting is that the cute owner has been attacked and she is the only person that can identify her attacker.

When Serenity identifies her attacker and Jason realizes that he is one of the most dangerous people out there whom vice also wants to capture he knows that things have taken a more dangerous level. He must take Serenity into protective custody and keep her safe so she can testify in court.

As Serenity and Jason spend more time alone in close quarters thing start getting more and more difficult to keep their relationship professional. The sparks fly between them and the attraction is undeniable, the question is how long can Jason hold out. Especially since he knows that Serenity is a forever kind of girl and he doesn’t want any type of commitment.

Jason being a cop protecting her but wanting to do the right thing was awesome, even if he thought that being with her was not right no matter how much he wanted her. While Serenity was having a tough time being way from her diner, he made things easier for her by getting ingredients for her to bake so it would take her mind away from her being technically under lockdown.

A great novella by Kimberly Kincaid, it is a short enough that I could read in a little spare time, but long enough that it didn’t leave me wanting. It has suspense, drama and lots of sparks between the two main characters. If you like a fast, easy and fun read with lots of steam, Drawing the Line by Kimberly Kincaid will not let you down.

Publication Date: April 24, 2013
When Detective Jason Morgan is tasked with keeping a local restaurant owner safe as part of a make-or-break case, he rises to the challenge. The job is his first priority, and he owes it to the memory of his father, a detective killed in the line of duty, to do it at any cost. But Jason never expected Serenity Gallagher to be so beautiful, so serious…or so tough to protect.Serenity has moved from place to place at the whim of her capricious mother all her life. The last thing she wants is to leave the diner she finally calls home, even if it means being stuck with a sexy blue-eyed detective. But she’s the only witness to a horrible crime, and the man behind it wants her very, very dead. Going into protective custody means survival, no matter how much Serenity hates hiding.As Jason and Serenity bide their time together, they are shocked to discover they have much more in common than the surface reveals. But keeping her safe is Jason’s number one priority, no matter how much he’s drawn in by the woman beneath the witness, and Serenity’s past makes it difficult to trust. As the stakes get higher and the spark burns hotter, can Jason and Serenity draw the line?

« REVIEW: Own the Wind by Kristen Ashley
REVIEW: Changing Lanes by Kathleen Long »
Comments are closed.