In Dream On by Stacey Keith, single mother Cassidy Roby is struggling to get by. With no support from her child’s father, she works as a 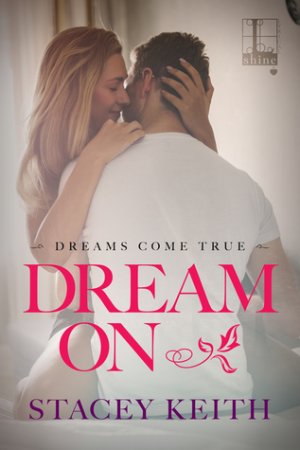 roller skate waitress. When Mason, the man who broke her heart before his senior prom returns with his fellow NFL players in tow, she is surprised. What surprises her even more is when Mason makes it clear he wants a second chance to make things right.

I normally enjoy second chance romances, but I didn’t like this one all that much. First there’s Mason, who claims he has only wanted Cassidy. Yet instead of coming back to town to fight for her, he spends ten years away, dating and sleeping his way through a variety of models. His actions weren’t the ones of a man pining away over someone. His reasoning for breaking up with Cassidy was weak, which leads me to my next issue.

Cassidy and Mason never have a discussion of why he broke up with her in the first place. She wondered but didn’t ask. He never comes out and says it, although it is revealed to the readers. One would think before jumping into a relationship with him again, she would want a reason as to why he left.

Cassidy comes across as a bit naive. She was worried about the town talking about her and Mason being together, but that doesn’t stop her from going out in public with him. She’s initially hesitant to see him, but after a little flirting she has no problem letting him back into her life and saying that she loves him. He wasn’t the same person he was back in high school; I would have liked to have seen her get to know the person he had become before making such a declaration. She has no thoughts of her daughter and how she might feel about the relationship until a run in with the paparazzi, then she’s suddenly concerned about her daughter.

I also had an issue with Kayla, Lexie’s aunt. She pretty much ignores the child until Mason comes back to town. Then she tries to get her brother, Parker, to get back with Cassidy. She claims she’s all about family, yet she treats Lexi poorly. She’s even worse to Cassidy. Her brother was also responsible for creating Lexie, yet she acts like Cassidy is the only one at fault. Cassidy never sticks up for herself, and I was glad when her mother stepped in and finally confronted Kayla and Parker about their treatment of Lexie. Still, that was something Cassidy should have done, not her mother.

I think the characters I enjoyed the most were actually Mason’s teammates, who visited Cuervo with him. They were witty and warned Mason against hurting Cassidy and Lexie, even though they didn’t really know them.

I enjoyed the concept of Dream On but the execution fell flat. I wasn’t crazy about the characters and their behaviors. If it was a few of the side characters I didn’t like, that would be one thing, but when I don’t care for either of the main characters, that brings down a book for me.

With a nine-year-old daughter, an overdue light bill, and a job slinging burgers while zooming around on roller skates, Cassidy Roby is not living the glamorous life. But Cuervo, Texas, has its charms: quiet streets, loving family, and the down-home familiarity of knowing which of your neighbors are mean as snakes. With Cassidy’s reputation, she knows what will happen if she steps a foot out of line. But how can she help it now that Mason Hannigan’s back in town?

As Cuervo’s high school quarterback ten years ago, Mason was all rock-hard abs and yes-ma’am manners. Now that he’s living the glitz and glory of the NFL, he’s all that plus a couple million bucks. The desire blazing between them is too hot to hide. Cassidy has some experience getting her heart broken by the hometown hero—and having the whole world watch her try to pick up the pieces. Will adding fame, fortune, and paparazzi be a playbook for disaster—or lead to the biggest adventure of her life?

4 Responses to “REVIEW: Dream On by Stacey Keith”