Exposure by Kelly Moran: Noah and Raven have been friends for years, but 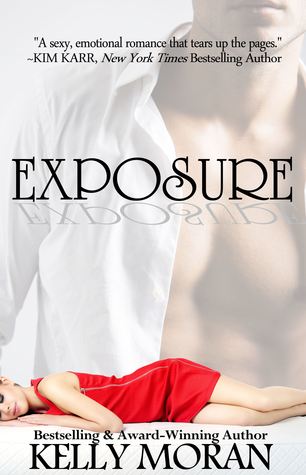 both have dark pasts keeping them away from each other. When Noah believes he’s finally free and clear of his, he makes his move to convince the woman he’s wanted for ten years to take a chance on him.

I had mixed feelings about Exposure. On one hand I enjoyed the suspenseful aspect of the story, even though I figured out right away who the person was that was threatening Noah and Raven. There was a good build up to the final showdown between them. On the other hand, I felt there was too little of the book devoted to that story. Instead, it felt like most of the time with Noah and Raven was featured in the bedroom. While there’s nothing wrong with that, I would have preferred to have it focus a little more on the story line. There were so many sex scenes I found myself eventually just skimming over some of them.

I also had a hard time believing Raven’s quick turnaround. She has issues with control because of her past. So at first she insists on control in the bedroom, insisting that Noah couldn’t touch her and going as far as to tie his hands together. Then suddenly she’s ok with him touching her, with no clear explanation as to why she changed her mind so quickly.

Noah and Raven are supposed to be best friends, yet neither one of them told each other about their pasts until it was absolutely necessary. For them to be as close as what was described, that seemed a little unusual. It also didn’t seem right that Noah kept the truth from her, especially when it was clear that spending time with him could put her in harm’s way.

Noah Caldwell has spent ten years biding his time for the chance to tell his best friend Raven Crowne the truth. He wants her. With the threat that brought him to her in the first place finally behind him, they begin a hot affair he’s only dreamed about. And reality is far better than fantasy. Yet beautiful Raven has her own dark history, one he’s trying desperately to release from her. But as their passion deepens and turns into more, his past rises up from the shadows to claim one last victim…and Noah could lose the only person he can’t live without.

« REVIEW: He Will Be My Ruin by K.A. Tucker
REVIEW: Starting Over by Barbie Bohrman »