Finding Home by Roxanne Snopek: Samara Davis hadn’t had an easy life, now widowed and a single mother she is returning to the only one of her former hometowns that held good memories. Samara is determined to start over and to create a good life and stability for 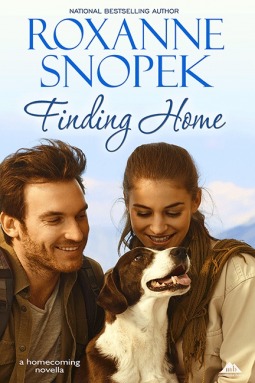 her daughter. Maybe when her daughter is settled she will be able to think about her own life, maybe.

Logan Stafford was the quintessential small town golden boy in high school. Then even after a failed marriage was still hot stuff around the small town of Marietta. Single, hot, teaching and really fighting to give his students what they need, every lady wanted him but he was still stuck on the girl who had left him 16 years ago.

When Logan and Samara run into each other after so many years apart they know instantly that the attraction that they once had is still there but as adults is there anything else? With Logan working on Samara’s house to try and get it ready for her they run into each other all the time add to that a couple of trips to the emergency room and an invisible chipmunk, can there be any doubt that they will end up together? The bigger question will be can these two make it last this time or will one of them be disappearing again?

We are transported back to Marietta, this time by Ms. Snopek who in a very short amount of time has me begging for more! Sam and Logan are so lovable and open. Jade, the daughter in the story, is well thought out and reading about her emergence is almost like watching a butterfly come out of a cocoon. My only real complaint is the length. Ms. Snopek’s style is wonderful and so easy to read I just wish she had expanded on some of the situations. However the story is wonderfully rounded and in the end the perfect aww moment.

Fourteen years after her abrupt departure, Samara Davis is back in Marietta, Montana. Now a widow, all she wants is to give her anxious four-year old daughter, Jade, a happy, stable home. Unfortunately, the heritage house she purchased is nowhere near ready for occupancy. And the man responsible for the delay is none other than high-school golden boy and love of her life Logan Stafford, available, interested and just as swoon-worthy as ever.

But this single mother has one priority. She’s all Jade has, and she’ll do anything, make any sacrifice, for her child’s future. And getting distracted by a long-lost boyfriend is not on the agenda.

Logan Stafford never forgot the lonely girl from the wrong side of the tracks who broke his heart. Not only is she as irresistible as ever, but her delightfully odd little girl has him wrapped around her finger in no time. Believing they’ve been given a second chance, Logan’s determined to pull out all the stops on the house to prove to them both that he’s a guy they can count on. But, despite how easy it is to love Logan, a second chance is still a gamble Samara can’t afford to take.