Finding Obscurity (The Secrets Series #1) by Emma Shade: OMG! Where do I start. I have read a lot of books, (yep I am a book junkie) and I have to say that Finding Obscurity by Emma Shade is at the top of my MUST READ list. What did I love about this book???? Everything, absolutely everything! 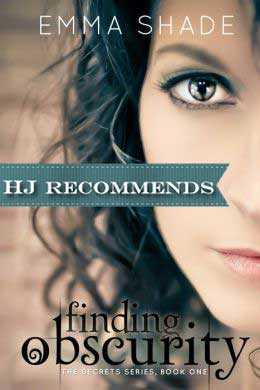 Liliana Canton always knew that there was something just a little different about herself. At a young age she has visions of the future, and when she was angry, scared, sad, she would short out electrical equipment. When she was 18 years old, she loses more than her younger sister to a car accident, she loses her entire family. Lily was driving the car that her sister was killed in, and her mother is so filled with hatred that she lets Lily know that she is adopted, never a true member of the family.

On her own, Lily has promised herself that she will never allow anyone to get that close to her again. She will not risk her heart and the pain of loss by letting other people in. That all changes when she starts to learn more about herself and what she really is. Now she has a best friend in Sam, and two hot guys, Blake (a Conjurer) and Ashton (a Vampire), viaing for her attention. All three are trying to protect her from the unknown forces where killed her birth parents.

“Once we find our match, Lily, we won’t let them go so easily

Ashton Ryder, OMG, HOT HOT HOT Vampire. He is drawn to Liliana the first time he sees her. There is something about her that makes him realize that she is his match. There is a history with Blake Moore, the I don’t want to give too much away. Ashton will give his life to protect Lily, and an though Lily has very strong feelings for Ashton, she also has feelings for Blake and these confuse her as well.

“I won’t give up, even if there is a slight chance we could be together though

Blake Moore, OMG HOT HOT HOT Conjurer. He has powers like Lily, and is willing to help her learn to control her powers, and learn what other things that she is capable of. He loves Lily and is upset that by her growing feeling for Ashton, but he would rather have her friendship then to not have her at all. Of course this does not stop him from trying to sneak a few kisses and tempting Lily to choose him instead.

“I’m type-O negative if any of you are interested.

I want a best friend like Sam Arbor! He really added humor to the story, helped Lily learn to open herself up to the possibilities, and is just an all around great guy. He has no problems telling Blake and Ashton to back off and give Lily room, she needs their help and support, not their chest beating pissing matches (which I have to admit were HYSTERICAL).

There a lot of twists and turns in the book, a lot of OMG moments, and nope, you are not gonna get any spoilers out of me. You need to read this book because I can promise you that once you pick it up and start, you will not be able to put it down until you get the last page.

AWESOME story and I look forward to reading more from Emma Shade, that is why I give Finding Obscurity 5 Stars!

After she loses everything she has ever cared about ten years ago, Lily decides its time to find answers about her past and why she has special powers. But when you can’t control seeing the future, and you hold enough electricity inside you to black out an entire city block, it doesn’t always make life easy.

She swore she would never care about anyone ever again after that fateful day so long ago. Then she meets sexy club owner, Ashton Ryder. Lily can’t afford to fall for Ashton. Then there is handsome, powerful, Blake Moore, who wants to help her with more than just her powers. She has to learn to trust people and let them into her heart, even as things spiral out of control.

Not only does she learn Ashton has a secret that will make her question everything she ever thought was real, but Lily finds out that her birth parents are anything but ordinary. Just when Lily thinks she has everything figured out, someone is determined to destroy her – because she isn’t supposed to be alive.

« REVIEW: Mr. Right All Along by Jennifer Taylor
REVIEW: As Hot As It Gets by Elle Kennedy »