Heavy Metal Heart (Demon Rock #1) by Nico Rosso: Wow, check out that cover!!! It looks SUPER hot, right? Well, it IS super hot but it gets a little weird. And by now, if you hear ME saying that something is weird, I’m hoping you know that I’m serious… 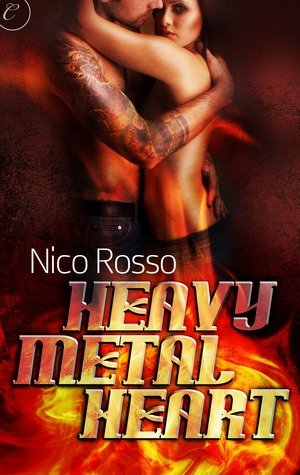 This is going to be a slightly shorter review because this was a relatively short book. 132 pages, according to Goodreads.com. But I didn’t feel slighted. It had a mostly complete story and all of the requisite hot scenes!!

I liked the hero, Trevor Sand, and I liked the heroine, Misty, as well. Trevor is a pretty easy character to get to know… He’s a rock star. Period. He’s slept with the countless women and has drunk all the liquor you can imagine. The only difference is that he’s not human. And so begins my confusion. So Trevor is a satyr… you know, half man, half goat? Well, half SOMETHING with hairy legs. Ok, like, hairy legs that are hairier than the usual hairy legs, ok? Oh and cloven feet. He’s also some kind of demon. Are satyrs demons? I didn’t think so but this one is. And he’s also something called an elemental. All you need to know is that he can change the composition of his body… stone, wood, fire, etc. How or why is he all three of these things? I have no idea and if it was explained in the book, I missed it. Misty seems like your average girl…working in Hollywood for a post-production FX company, which she hates doing. I’m pretty sure she wants to make her own movies? Or does she want to make her own art? I don’t know, all I do know is that she thinks her job sucks.

Next thing you know, bing, bang, boom, she’s at one of Trevor’s shows and he sees her in the crowd, yadda yadda yadda. Trevor and Misty are SUPER hot together. The Sexy Time is phenomenal. In fact, it’s the stellar Sexy Time that earned this book 3 instead of 2 stars. Very descriptive, super explicit, a little dirty… everything you want in your sex scenes. Unfortunately, it doesn’t end there…

They go on to figure out that Misty is Trevor’s Muse and now these other beings want to kill them. Fights ensue and there you go. The problem is that what I’ve just described is maybe a 50 page book, give or take. The rest of the 80-something pages devolves into some kind of freaky deeky poetry slam stuff. I mean, there’s some song lyrics tossed in every few pages… Trevor and Misty go on what I swear was a psychedelic-mushroom-tranced-out-trip across a field of grass and trees. I shit you not, I could not describe it even if you paid me to. I have no idea what happened. In fact, for a while, I was worried that I was stoned in some kind of Kindle osmosis weed transfer! But since that is highly unlikely, I’m guessing that the author is a poet at heart and wanted to impart some poetry into his erotic romance.

Rock Star. Front man. Demon. A descendant of satyrs and the lead singer in a band that feeds on the energy of its audience, Trevor Sand is growing weary of the constant need to perform. He needs the legend of the Muse—a woman destined to be a demon’s eternal companion and only source of sustenance—to be true.

Knowing that he’ll die if he loses her, Trevor must find Misty before his enemies do. But even if he can save her, he knows that regaining the trust of his fated Muse will be his greatest challenge.

« REVIEW: Some Like it Hot by Susan Andersen
REVIEW: Accidental Cowgirl by Maggie McGinnis »