In Kissed by a Cowboy by Pamela Britton, Jillian is a very special person for she can 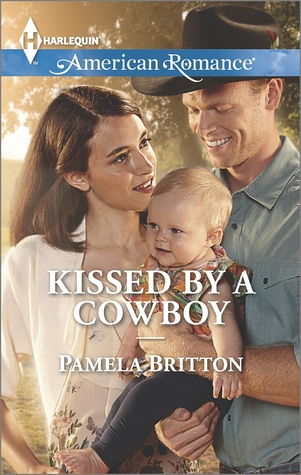 communicate with animals, she hears or more accurately see the animal’s thoughts and feelings in her mind and can do the same vice versa. But there are many skeptics out there that have left her not wanting to tell anyone. The worst for her are the men, for she feels like not only do they not believe her, it’s almost as if they think she is making things up.

Wes Landon needs to get a horse to replace his old one if he wants to be able to win and make the deadline stated on his father’s will for him to have made a certain amount of money by a certain age. But he cannot afford an expensive horse, he needs to buy one at a low price,  \that will be a winner. When he first sees Jillian at the sale he doesn’t know what to believe. She tells him things about the animals that he doesn’t know if he can believe yet she seems to know enough about animals that he considers asking for her help.

Only once Wes hears about her “horse whisperer” thing, he doesn’t know what to believe. He only knows that she somehow knows things about the horse before he notices them, and not only has she charmed the horse, she has charmed his dog and him too. But on his return home he discovers another thing that puts all his plans in danger. He is a father and his baby daughter has been dropped off at his mother’s home without a backward glance.

Jillian always believed Wes to have been raised with a silver spoon and to have everything. Only she soon finds out how wrong she was on all counts. She learns that he is living by the wages his mother pays him as manager, has no money besides that and is more responsible than she had first thought. Starting with taking care of his daughter from the moment she arrived, even without knowing a thing about babies, and refusing the easy out his mother gave him when she offered to keep the baby in the beginning. And soon she finds herself visiting him and his daughter and helping him in everything she can in order for him to succeed in his goals.

The more time Jillian and Wes spend together, the stronger their attraction becomes. But Jillian doesn’t want to be a wife or a mother. She has suffered many loses in her life and knows the worst heartbreak is when she is left behind. So it will be up to Wes to convince her that the risk is only equal to the reward of the happiness they will have together if she gives them a chance.

If you want a slightly different yet fun and entertaining read, don’t miss Kissed by a Cowboy by Pamela Britton.

Deep down, Jillian has always known she couldn’t be a wife and mother. After the pain she’s experienced in past relationships, she can’t risk the heartbreak. But she has her animals and her special gift, which has brought her to Via Del Caballo, California. The tiniest sign tells her everything an animal is feeling. To observers, it’s uncanny.

To Wes Landon, the stories of the gorgeous “horse whisperer” are so much mumbo jumbo. Then he sees Jillian in action, charming horses, dogs…even him. When his brand-new baby daughter is left in his care, Wes has hopes that Jillian would want to be part of his family. But the closer he tries to get to her, the more she pulls away. Can he convince her to take a leap of faith?

« REVIEW: Her Backup Boyfriend by Ashlee Mallory
REVIEW: It Started at Sunset Cottage by Bella Osborne »

4 Responses to “REVIEW: Kissed by a Cowboy by Pamela Britton”