Nothing to Hide (The Wrong Bed) by Isabel Sharpe, is a sweet and sexy romance that takes place during the summer along Lake George. This is the story about two brothers, Jonas and Erik Meyer and two feisty women, Allie McDonald and Sandra McKinley. 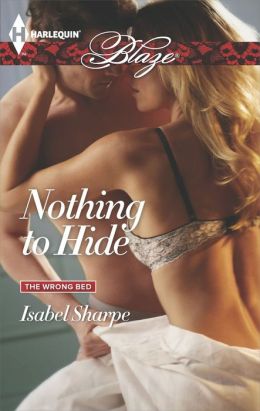 Although both Jonas and Erik are extremely rich, they do not flaunt their wealth. Erik is a little flashy and drives a Mercedes, while Jonas is a little more down to earth and drives a Toyota Camry. Jonas has dreams of becoming his own boss, while Erik is content working in graphic design.

Allie and Erik were friends as well as colleagues until Allie was laid off from her position as an assistant art director. Now she is looking for a job during the scorching New York City summer heat. Erik has always believed that he and Allie belong together, so he invites her to spend a couple of weeks with him at his family’s mansion of a home on Lake George. Allie has no interest in Erik romantically, but she agrees to go as long as she is not alone with him. So Jonas and his long-time friend Sandra are joining them for part of the time.

Allie and Sandra end up having a lot in common. They are both single, live paycheck to paycheck, and know what it is like to be very poor. However, Sandra was born into wealth but was disinherited when she married a control freak who was much older than her, in order to escape the life she had with her parents. Allie grew up in a hovel in Brooklyn with her drunken mother and five younger brothers after their father left them for a very wealthy woman.

So Allie, Erik, Jonas and Sandra meet at the Meyer mansion for a vacation and hopefully a little loving. Jonas and Sandra have known each other for years and at one time were lovers, which causes a little tension between the foursome at first. You see, Allie and Jonas are extremely attracted to each other and it takes a little while for Sandra to accept the possibility of them as a couple. Luckily, Erik and Sandra find some common ground, which evolves into a much deeper romantic relationship. Allie and Jonas give in to their feelings and fall in love.

This is basically a traditional love story, with the focus on two couples instead of just one. I found that the book progressed at an extremely slow pace and with the exception of Sandra, the other three characters lacked dimension. I just loved Sandra, her spunky personality and way with words were laugh out loud funny. Her dialogue was smart, witty and clever. I also enjoyed the subplot about Allie and her dream of fashion designing. I found bringing the past into the present through fashion to be very entertaining.

You never know who will end up in your bed

NYC in the summer is unbearable. So when a former coworker invites Allie McDonald to stay at his family’s “summer home” (read: rich manor) for two weeks, how can she say no? She may end up spending most of her time avoiding his not-so-subtle advances—but his ridiculously hot brother, Jonas Meyer, will be there, too.

And Jonas has a seriously fine physique. Allie gets a sneak preview one night when she accidentally crawls into his bed and discovers, uhwow. Now she’s running from one guy while seducing his brother with some super-sexy vintage lingerie and a little inspiration. And with (almost) nothing to hide, Allie also has nothing to lose!