In Perfect 10 by Erin McCarthy, For the past eleven months, Katrina Phillips has lamented over Drew Jordan as being the-one-who-got-away. They were best friends through college until their relationship took a drunken turn for the sexy one fateful night. Since Drew bailed on her the next morning, Katrina hasn’t heard another word from him. Well, until she has a major technical malfunction and her new phone posts details of her sex life on her personal and professional pages online. Then Drew finally reaches out to her to 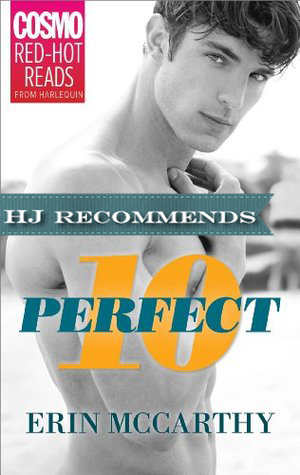 “Sex happens. But it doesn’t mean we should let it ruin our friendship. I miss you.”
Oh, God, oh, God, he missed her and she was going to melt.

Katrina is mortified by the explicit details of her life Drew must have seen. She’s desperately trying to figure out if he’s interested in picking up where their friendship left off, or if he’s trying to prove that he’s taken her constructive criticism to heart and can offer up a perfect experience in the bedroom. Either way it’s great to have Drew back in her life. But will it be enough if he only offers friendship?

“I shouldn’t be taking advantage of you this way.”
He looked up at her, surprised. “What do you mean?”
“You clearly want to prove that you’re a perfect ten, and I’m letting you pull out all the stops. But you had me at hello last night.”

Perfect 10 is a fun novella whose story line is one of my favorite tropes: a second chance romance.

Erin McCarthy did a nice job keeping the tone of the book flirty and with just enough trendy dialogue to be relevant, not overdone. The premise behind Katrina’s technological dilemma is certainly one a lot of us have experienced unfortunately, although probably not on the same grand scale. But I thought she handled it quite well, all things considered. To me, it seemed realistic that Katrina was a bit wary of Drew’s sudden interest in her again after almost a year of no communication. And it was nice that she had her best friend to help keep her mind straight when she was freaking out.

Of course, this was also a friends-to-lovers story, so there was a solid dynamic between Katrina and Drew that I enjoyed. There was a lot of substance to their conversations and subsequent dates. It wasn’t just a relationship built out of lust. Not that there wasn’t any lust between them. There were definitely some very hot romance scenes that were every bit as tender as they were steamy. I thought those moments seemed to fall in place naturally in the progression of the story. It didn’t feel like anything was rushed, even though this was a novella, not a full length novel.

If you enjoy sexy Cosmo Red Hot Reads stories like me, I think you’ll have a great time getting to know Katrina and Drew.

Published May 13th 2014 by Cosmo Red Hot Reads from Harlequin

Blammo. Now everyone in the world can see who Katrina has dated and how they rated in appearance, sexual performance and (OMG) detailed descriptions of their manly parts! Now her phone is blowing up with angry exes�and an out-of-the-blue text from the only guy who came close to a perfect score….

Katrina has had a thing for Drew Jordan since forever ago, even if a booze-fuelled one-nighter did destroy their friendship. So why is he suddenly texting her now�and is it because she rated his Sexy Staff of Manliness as “magnificent?” Now the only way to satisfy her curiosity is to reunite with Drew…and rate him all over again!

« REVIEW: Love, Lies and Lemon Cake by Sue Watson
REVIEW: If You Want Me by Cassi Carver »