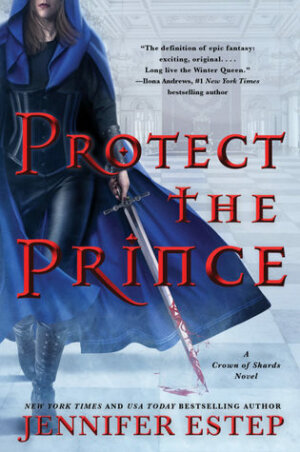 to her friends, finds herself in the precarious position of having to prove to her fellow countrymen in Bellona that she is worthy of the title. Without getting killed in the process. Because it seems that there is more than one evil person out to get her and take her new throne away from her. With the help of Evie’s magic, so far she has avoided any more catastrophe than has already befallen her country. But when almost everyone–inside her palace and elsewhere–is suspect, it’s difficult to know who to trust.

‘A secret enemy was always much more dangerous than one right in front of you.’

Even though it probably isn’t wise, Evie feels she must go on her trip to neighboring country Andvari and seek out a new treaty with the king. But there is already bad blood between the countries, considering the losses they also personally suffered in the battle that resulted with Evie becoming Winter Queen. Knowing too well how it feels to lose those closest to you, she holds her tongue when the insults fly and watches her back against attacks. After multiple assassination attempts against her, both in her own kingdom and in Andvari, Evie learns more about her magic, who she can count as an ally, and what it really means to love someone, namely the Andvarian bastard prince, Lucas Sullivan, enough to sacrifice your own happiness to keep them safe.

‘A queen shouldn’t have to carry weapons, at least not inside her own palace, but then again, I was no ordinary queen.
And these were far from ordinary weapons.’

A fantasy novel of epic proportions, Protect the Prince wowed me with its complicated plot, entertained me with the outrageous and dynamic characters, and stunned me with the lengths our heroine, Queen Evie, would go to for her people.

‘I might not think that I deserved to be queen, or that I had the skills, strength, or magic to truly be a Winter queen, but it was my duty to do what was best for Bellona.’

I’m already a fan of Jennifer Estep’s thanks to her Elemental Assassins urban fantasy series. So when I heard she had an epic fantasy planned I couldn’t wait to try it. I unfortunately didn’t get to read book one in Crown of Shards–although it’s still on my TBR!–but I found that I could easily follow along here in book two where Estep included a lot of background for us. And even though there were *a lot* of people to “meet” and details about the different countries and their oftentimes turbulent histories together, as always, the pacing was perfect. The same could be said for the details Estep used in each scene, as well as the way she nailed the emotions every character was experiencing. It’s something I think she excels at and one of the reasons why I fell in love with Gin & crew in the Elemental Assassins series–and why I knew I’d really like Evie and her ragtag group of friends here.

Saying that newly crowned Winter Queen Evie found herself in a complex situation is an understatement. She had an unknown number of people actively trying to kill her and those around her. Her countrymen didn’t necessarily think she was qualified to be queen. She was dealing with the loss of family and friends from a battle fought in book one. And Evie was in love with Sully, a bastard prince (his words, not mine), who was sort of martyr-ish and didn’t want to tarnish people’s view of her by having a relationship with her. So, yeah…Evie had a lot to sort through. But sort through it all she did. Mostly. By the end, we got to see how much grit and strength–and surprisingly strong magic–she truly had and found out who she could and couldn’t trust among her people and her own group of consorts.

Protect the Prince was an unputdownable, exceedingly well-written novel that kept me on the edge of my seat with its exciting fight scenes and with whether or not our heroine could make things right for her country *and* manage to stay alive! Highly recommended for fantasy fans.

Everleigh Blair might be the new gladiator queen of Bellona, but her problems are far from over.

First, Evie has to deal with a court full of arrogant, demanding nobles, all of whom want to get their greedy hands on her crown. As if that wasn’t bad enough, an assassin tries to kill Evie in her own throne room.

Despite the dangers, Evie goes ahead with a scheduled trip to the neighboring kingdom of Andvari in order to secure a desperately needed alliance. But complicating matters is the stubborn Andvarian king, who wants to punish Evie for the deaths of his countrymen during the Seven Spire massacre.

But dark forces are at work inside the Andvarian palace, and Evie soon realizes that no one is safe. Worse, Evie’s immunity to magic starts acting in strange, unexpected ways, which makes her wonder whether she is truly strong enough to be a Winter Queen.

But Evie’s magic, life, and crown aren’t the only things in danger—so is her heart, thanks to Lucas Sullivan, the Andvarian king’s bastard son and Evie’s . . . well, Evie isn’t quite sure what Sullivan is to her.

6 Responses to “REVIEW: Protect the Prince by Jennifer Estep”