In The Baby Bonanza by Jacqueline Diamond, Zora Raditch made some big mistakes in her life, 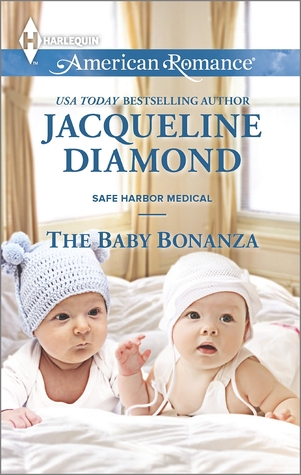 most of them related to her now ex-husband whom she had an affair with while he was married to one of the favorite doctor’s at Safe Harbor, making her into an outcast there. Only to have him cheat on her and leave her for another woman the same way he left his ex-wife for her.

Unfortunately, that’s not where her mistakes ended, no, she slept with him just before the divorce was final thinking that he did love her, only to have him walk away and leave her pregnant with twins. Now Zora has to deal with an unplanned pregnancy and finally accept that her ex doesn’t want to get back together with her. And the only people she can rely on are her housemates, especially Luke “Lucky Mendez.

Lucky was one of the many who judged Zora for what she did, but he can see now how much she also got hurt with what happened and that she regrets her actions. Now she needs people to help her and to rely on with the twins that are on the way, but she won’t ask anyone. As her housemate, he can see how difficult her pregnancy is becoming, and wishes she would tell the father of her children so she can get assistance. But in the meantime as the young and strong male of the house he will do whatever he can to help all the pregnant women there.

As Lucky gets closer to Zora, he begins to fall for her, but unless his department gets a good donation for it to grow he may have to move away to get better opportunities. While Zora is afraid to let others know who the father of her babies is, and the repercussions it may bring to her and her children. But with a little help from her housemates and from Lucky, she may just be able to get past any difficulty, not only with her pregnancy, but that will come up at the hospital as well.

I really liked The Baby Bonanza, it was a sweet and entertaining read. I remember Zora from previous books and I was not a big fan of her, but Jacqueline Diamond did a great job redeeming her and giving her a good HEA. I also loved seeing some of the old characters we have fallen for along the way and seeing how their lives are moving along together as well as some resolutions that on the previous book felt needed.

If you want a sweet and entertaining read, don’t miss The Baby Bonanza by Jacqueline Diamond.

Safe Harbor ultrasound technician Zora Raditch has made some big mistakes, but sleeping with a man just before divorcing him takes the cake. And then she discovers she’s pregnant with twins. Struggling to deal with an unplanned pregnancy and accept that her ex wants nothing to do with her, Zora finds that the only man she can count on is her handsome and headstrong housemate, Lucky.

Luke “Lucky” Mendez wants to protect Zora and her babies he knows her ex won’t suddenly turn into the husband she needs. But being a friend is a lot different than stepping in as a father. Can Lucky prove to Zora that he’s the family man she and her babies deserve?

« REVIEW: Bring On The Dusk by M. L. Buchman
Spotlight & Giveaway: Of Silk and Steam by Bec McMaster »

4 Responses to “REVIEW: The Baby Bonanza by Jacqueline Diamond”