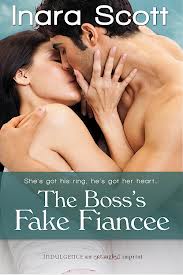 Is she his worst nightmare…No relationships, that’s billionaire Garth Solen’s rule—especially not with a woman like his new employee Melissa Bencher, who thinks with her heart and not her head. But all bets are off when Melissa’s attempt to make her jerk ex-boyfriend jealous by suggesting that she’s dating Garth. To protect his ailing grandmother, he is forced to play the part of Melissa’s adoring fiancé….or a dream come true?

Melissa couldn’t begin to imagine all the trouble one impulsive act could cause. Now she’s trying on rings and posing for the paparazzi with her gorgeous boss. The game is clear: for one month, they play the part of an engaged couple, and then they part ways. No emotions. No entanglements. But when it comes to matters of the heart, Melissa’s never been good at following the rules…

The Boss’s Fake Fiancée by Inara Scott was an emotional and uplifting story as readers will follow the journey of how complete opposites, Garth Solen and Melissa Bencher fall in love.

The story started off a little slow for me, but then the pace did pick and I saw the chemistry between them and wanted to see more.

Garth seemed rather detached at first and rarely showed any emotions whatsoever except when he thought or interacted with his grandmother, Nan and even with his housekeeper, Jess. It was a joy to see the love he had for Nan and the special bond between them. She raised him when he was a little boy and he would absolutely do anything for her, which includes a fake engagement while she is recuperating from pneumonia. He is so afraid of losing the only person who has loved him unconditionally and sees how happy she is with this “engagement” and feels this will help her recover from her serious illness.

Melissa has had bad luck with men and after a tense conversation with her ex, she inadvertently has her and Garth being engaged in the media. Now, Garth wants her to keep up this charade for his grandmother’s sake and they even get an engagement ring or two. She and Garth start to connect while away at the family summer house and sexual tension between them cannot be denied and they make love. Reality soon sets in when they go back and Garth’s inability to express himself during a brunch with her family ends in disaster.

Pieces started coming together and Melissa discovered that autism caused Garth to have difficulty engaging in social conversation and expressing himself while fear of rejection closed Garth off from lasting relationships.

Will they be able to save what was “once” a fake engagement that turned into something so much more? I could not wait to find out and the ending was so sweet and lovely that it melted my heart. I would recommend this story because it truly shows the power of love.