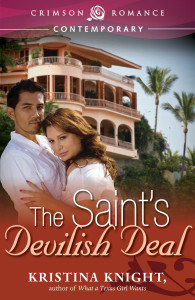 Esmerelda Quinn has been looking for a place to belong since her parents were killed in a car crash when she was young. The closest thing to home has always been Aunt Constance’s villa in Puerto Vallarta, so after a string of hotellier jobs, she’s coming home to run the villa.

Santiago Cruz has called the villa home for as long as he can remember. In between surfing events, Constance has always had a room for him. Color him surprised when Constance leaves him with a joint interest in the villa – along with her niece Esmerelda.

Esme isn’t thrilled to share ownership of the villa with the the youngest Cruz brother – especially as the Cruz family has been after the villa for years. But Santiago has grown up while she’s been away and soon she finds herself falling for the rich boy down the hall – all over again.

The Saint’s Devilish Deal is a passionate re-union story; The characters sizzle at every meeting and their hot, biting dialogue leaves you wanting to read more.

Esme and Santiago had crashed and burned before. Brought together again, the spark ignites into flames with only a touch. But there was more at stake than a lover’s heart this time. Determined to save her aunts villa, Esme has to choose…find a way to get Santiago to leave even though her body craves his touch, or give in and become business partners with benefits for the next 6 months.

This book will keep you up late as you follow Esme and Santiago’s push and pull relationship that spirals out of control and refuses to stick with the plan.

The Saint’s Devilish Deal is definitely a recommended read.

Quote from the book:
“Oh yeah, she wasn’t nearly as immune to him as she pretended to be. Maldito, neither
was he to her. Seducing Esme, which seemed like the perfect solution to their problems
five minutes ago, wouldn’t be nearly as simple as he’d envisioned. They were both likely to
go down in flames, and where would that leave Constance’s villa?”

« Review: Playing at Love by Ophelia London
Review: Take it Like a Vamp by Candace Havens »