The Sweetest September by Liz Talley: Loneliness is a really awful feeling. Depressing and feeling the pain of desertion are almost worse. So what happens when you put all three together and mix in some alcohol? A really bad time in a bar’s bathroom and this time it looks like it’s 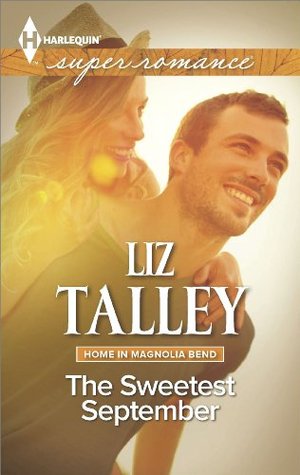 going to have lasting affects.

When Shelby and John meet in a small town bar they never realized their lives were about to change forever. After John runs out of the quickie Shelby doesn’t think she will ever put eyes on him again but ten weeks later everything changes.

What happens when two very hurt and damaged people create a life? Will it bring them closer together? Or will they stay strangers passing in the night?

Ms. Tally brings us to Breezy Hill in a story about love and loss, and the meaning moving forward. Her descriptions of everything from people to the land have you clearly making this small town real and wondering about your own choices. The story focuses mostly on the damages John has suffered it was almost refreshing to see things from the hero’s perceptive. Many times we read a story where the heroine is completely damaged and awaiting the hero to rescue her. It was really interesting to see them both with damaged backgrounds but to have Shelby really be the key to healing John.

The writing was charming and eloquent throwing in some southern twang to help it feel authentic. For those who enjoy reading a not so perfect love story with plenty of healing this is a top read for you.

A mistake that’s meant to be…

All John Beauchamp wants is a simple life. He’s happy running his Louisiana sugar cane plantation and doesn’t want more than that. Then Shelby Mackey breezes in, announcing that she’s pregnant. Their one crazy night of passion has changed everything.

Except Shelby insists John doesn’t have to be involved�she’ll raise the baby herself. But John can’t let her go that easily. Even without the baby, Shelby is a breath of fresh air. Her call-it-as-she-sees-it attitude intrigues and attracts him. So when Shelby agrees to stay temporarily, John’s determined to make that stay permanent�and as sweet as can be.

3 Responses to “REVIEW: The Sweetest September by Liz Talley”