We Never Asked for Wings by Vanessa Diffenbaugh is a book about growing up, 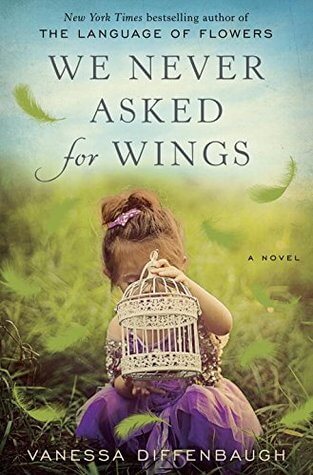 making mistakes, fixing them, young love and new love. It is about a mother finally getting to be a mother to her children, it is about the mistakes she makes, the feeling of self doubt that she has, the wish to run, but the need to stay.

Letty never had the opportunity to be a mother to her son Alex and daughter Luna. Pregnant at 18, Letty allowed her mother to step in and act as mother to her son and later on, her daughter. When her parents decide to return to Mexico, allowing Letty to be the mother that she never was, she is scared. She has no idea how to be a mother to her children and she struggles daily with her fear of hurting them and the pressures to make a better life for them.

Letty will tell little white lies to get her children into a better school district where Luna and Alex will have the opportunities that they would not have where they are now. With the help of Rick, Letty just might be on the right track to getting her family to the other side of the highway bridge.

Alex is smart. He is driven. He loves science, he loves birds, he loves the little lost girl in his class that shares his love of school and the wetlands. Although Alex loves his new school, he does not want to leave his girlfriend behind in a place that he cannot protect her from the mean kids that will pick on her and cause her harm.

When Alex makes decisions and is caught in a web of deceit, it will take Letty, Rick and Wes (Alex’s dad) to save the boy and his girlfriend from an uncertain fate.

What I loved about this book is the struggles that Alex and Letty go through in this book. I felt bad for Letty because yes, she was a young unwed mother, she did not tell Wes about the baby because he was on his way to college and she did not want to ruin his future. Yes, she leaned on her mother and allowed her to raise Alex, but with Luna, she thought it was her chance to get it right, but her mother stepped in and took over. I felt like Letty was never really given a chance. Letty also needs to make decisions where Rick and Wes are concerned. Yes she has growing feelings for Rick, but when Wes walks back into her life, she needs to decide if the old feelings that she had for Wes when she was younger are still there, or if Rick is really the right person for her.

With Alex, I felt his fear, his uncertainty, is love for his girlfriend, for his sister, and even for the mother that he was loyal to, but afraid to trust. The decisions that Alex made where with the best of intentions, and he tried to open up to his mother, but when she tuned him out, he took matters into his own hands. I love how Letty stepped up, helped Alex and had his back no matter what. I believe that their relationship grew stronger because of it.

I really enjoyed this book and look forward to more from this author.

From the beloved New York Times bestselling author of The Language of Flowers comes her much-anticipated new novel about young love, hard choices, and hope against all odds.

For fourteen years, Letty Espinosa has worked three jobs around San Francisco to make ends meet while her mother raised her children—Alex, now fifteen, and Luna, six—in their tiny apartment on a forgotten spit of wetlands near the bay. But now Letty’s parents are returning to Mexico, and Letty must step up and become a mother for the first time in her life.

Navigating this new terrain is challenging for Letty, especially as Luna desperately misses her grandparents and Alex, who is falling in love with a classmate, is unwilling to give his mother a chance. Letty comes up with a plan to help the family escape the dangerous neighborhood and heartbreaking injustice that have marked their lives, but one wrong move could jeopardize everything she’s worked for and her family’s fragile hopes for the future.

Vanessa Diffenbaugh blends gorgeous prose with compelling themes of motherhood, undocumented immigration, and the American Dream in a powerful and prescient story about family.

« REVIEW: Win Me Over by Nicole Michaels
Spotlight & Giveaway: Flirting with the Devil by Kym Roberts »

2 Responses to “REVIEW: We Never Asked for Wings by Vanessa Diffenbaugh”