Hi Joanne and welcome to HJ! We’re so excited to chat with you about your new release, A Nine-Month Temptation!

Hello! Thank you for having me! 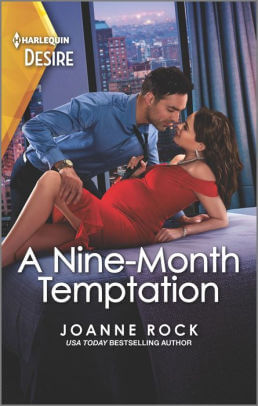 I will improvise a little here! The title actually says a lot about this one… A Nine-Month Temptation is a surprise pregnancy story that kicks off a new series with a sexy beginning!

Best. Job. Ever.
Sable Cordero sipped the fine champagne and toasted herself in the full-length mirror at the Zayn Designs studio in Manhattan, where she’d been working as a stylist for three months. What other line of work would give a backwoods Louisiana divorcée with more ambition than savings the opportunity to drape herself in haute couture from the most lauded new brand of the year?

My fashion stylist heroine is recently divorced and trying to kick start her life after unhappy years battling infertility. She’s moved to Brooklyn so she can be an apprentice to a new designer.

The hero is the CEO of his brother’s fashion house, running the business end while his brother designs the clothes.

The hero and heroine meet at the fashion house, and the connection is instant, though they are convinced it’s temporary, even making plans to distance themselves after their one-night together.

What draws the hero first is physical attraction since he believes his heart will always belong to his wife who died too young. He notices the heroine’s hair and her southern accent, the way she moves and speaks.
The heroine notices the way the hero supports his fashion designer brother, going to bat for him with their judgmental father.

Roman fused his lips to hers. Kissing. Claiming. The need to taste her had been a fire in his blood from the moment he’d stepped into the studio, so her acquiescence came not a minute too soon. She tasted like strawberries and champagne, her flavor going to his head faster than any drink.
He wrapped his arms around her and held her close, only to be reminded her dress had no back. A groan went through him at the feel of her smooth skin through the long, silky ribbons. He fought the urge to untie them and send the thin fabric to the floor in a heap. He didn’t want to rush things.
“You’re not wearing one damned thing under this dress.” He spoke the words against her damp lips, then nipped the lower one between his teeth. “Are you?”
She sucked in a startled breath before arching her hips into his. Robbing his brain of thought. Torching any restraint he might have salvaged.
“There was no room for anything but me.” She smoothed her hands down his sides and then hauled his shirttails free so she could tunnel beneath the fabric.

Roman stuffed his tie into his briefcase as the elevator door opened onto the loft. R&B music made the floor vibrate, the horns blaring and drums thumping as loud as in any dance club. The lights shone brightly in the center of the work area, while the edges of the room remained in shadow.
But it wasn’t the light or the music that hit his senses like an assault.
That honor went to the woman strutting away from him in a black silk dress that molded to her curves like it had been poured over her. Her lustrous, dark hair was piled haphazardly on her head, a braid coiled around the mass like an afterthought to keep it in place. The dress had no back. Zero. The fabric only covered the soft swell of her ass, the silk cupping the bared dimples at the base of her spine as if to highlight that undeniably sexy feature.
Two thick ribbons cascaded from a knot at her neck to sway between her shoulder blades. As she moved, her hips rolled in a come-hither rhythm so seductive he found himself following in her wake even from ten yards away. A champagne flute dangled carelessly from her fingertips as she wove her way between stylized dress forms and the kitschy busts of composers that Marcel collected. She moved among them like they were adoring lovers, caressing a cheek here, bumping hips with a mannequin there.
She was so sexy she took his breath away, his pulse pounding in time with each step of her stilettos.
Tap. Tap. Tap.
How had the beat synced up? He wanted to catch her. Pull those teasing hips against him.
Right up until she paused to cast a sultry glance over one shoulder. And promptly screamed at seeing him.
The champagne glass shattered on the hardwood.
Damn.
It was her. Recognizing the very woman he’d been hoping to avoid, Roman regained his faculties at once.
“It’s just me,” he assured her, moving toward the stereo system on the shelf between two of the huge arched windows overlooking the street. Dialing down the volume, he turned toward Sable, the woman who’d populated far too many fantasies since his one and only meeting with her. “Roman,” he reminded her.
He couldn’t help feeling the flash of annoyance that she was staring at him like she’d seen a ghost. The thought of her forgetting him when she’d made an indelible impression on him was a definite kick to the ego. Not that it mattered.
“Of course I remember you.” She hastened to speak, possibly hearing the irritation in his voice. “I’m sorry.” She started to take a halting step, her movements jerky. Was she embarrassed? “I wasn’t expecting anyone,” she rushed to explain, color flooding her cheeks.
Seeing that she was about to step on glass, he crossed the floor to help her. Somehow, that meant lifting her off her feet to remove her from the danger. Roman realized how unwise that decision had been the moment his fingers encircled her almost-naked waist. His fingers caressed bare skin while his thumbs pressed into the black silk just above her hips. For a scant second, her breasts grazed his chest as he picked her up.
He didn’t want to let go. Not when he could feel the tight points of her nipples brush against him. Not when he heard the swift intake of her breath, felt the rush of air along the heated skin at his neck, saw the flash of awareness in her hazel eyes. Hell no, he didn’t want to release her.
Which was why he forced himself to put her down, prying his fingers free from the magnetic force that was her gorgeous body, then jamming them into his pants pockets where he balled them into fists.

My hero is a widower still grieving a loss. I would have counseled him to keep his heart open, to remember that his wife would have wanted him to find happiness and live for them both.

Right now, I’m working on a western set series for 2022, tentatively called The Ranch Inheritance. But next up is a Texas Cattleman’s Club story- Trapped with the Texan (August Desire), then the next two Brooklyn Nights stories, Ways to Tempt the Boss in September and The Stakes of Faking It in November.

To enter Giveaway: Please complete the Rafflecopter form and Post a comment to this Q: Did you ever do an internship or apprenticeship before? And if not, what was your first job out of school?

Excerpt from A Nine-Month Temptation:

One night rocked their world. Now can they tame their passion for their baby’s sake?

Ever since their mind-blowing encounter months ago, fashion CEO Roman Zayn hasn’t stopped hungering for Sable Cordero. But as a rising star in his brother’s design studio, the intoxicating celebrity stylist is strictly off-limits. Even when Roman discovers Sable is pregnant and steps in to offer support, further intimacy between them feels forbidden. But resistance to an attraction like theirs just may prove futile…
Book Links: Amazon | B& N | iTunes | Google |

Joanne Rock is a USA Today bestselling author. She’s written over one hundred books, most recently focusing on sexy contemporaries and small-town family sagas. She enjoys romance for prioritizing relationships and encouraging readers to follow their dreams. A frequent speaker at regional and national writing conferences she enjoys giving back to the writing community that nurtured and inspired her early career. She has a Masters degree in Literature from the University of Louisville. When she’s not writing, Joanne enjoys travel to gather new ideas.
Website | Facebook | Twitter | Instagram | Goodreads |

« Spotlight & Giveaway: To Tempt A Scandalous Lord by Liana De la Rosa
REVIEW: The Playboy’s “I Do” Deal by Tara Pammi »

41 Responses to “Spotlight & Giveaway: A Nine-Month Temptation by Joanne Rock”