Today, HJ is pleased to share with you Karla Kratovil’s new release: A Perfect Engagement 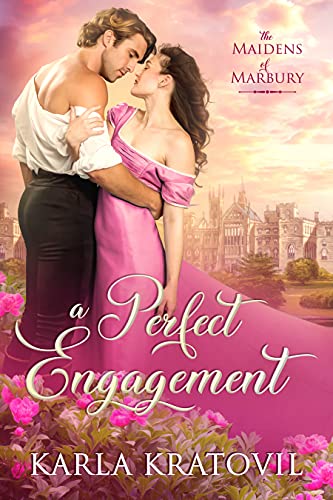 When Charlotte Grisham is saved from an out-of-control carriage by a handsome gentleman, she knows fate has sent her the perfect man. The Marquis of Hawksridge is titled, handsome, and heroic—precisely the kind of gentleman her parents want for her husband. Before Charlotte knows it, she is engaged to be married.

Daniel Weston can’t believe his identical twin brother is marrying a lady he barely knows. Moreover, he’s begging off his own engagement party. Daniel allows his twin to talk him into going to the week-long house party in his stead…just for a few days. They used to pretend to be each other all the time in their youth. What could possibly go wrong?

Charlotte immediately realizes her fiancé has sent in a doppelgänger, but continues the ruse so no one will realize her fiancé has all but abandoned her. Everyone sees her as perfectly behaved. But perfect girls do not share searing kisses with men who are not their betrothed. Charlotte knows her duty, but what about her heart?

Enjoy an exclusive excerpt from A Perfect Engagement

Excerpt. ©Karla Kratovil. Posted by arrangement with the publisher. All rights reserved.

Giveaway: An ebook copy of A Perfect Engagement & 3 Tule ebooks

From the time she read fairytales as a child, Karla Kratovil was hooked on stories that ended in Happily Ever After. Now as an author of sexy historical romance she gets to craft her own happy endings. Karla lives right on the edge of Northern Virginia’s wine country with her college sweetheart, two terrific teenagers, and two blond terriers. She is a Taurus. Like any good earth sign she loves good food, good wine, and getting her hands dirty growing things in her garden.

13 Responses to “Spotlight & Giveaway: A Perfect Engagement by Karla Kratovil”