Today it is my pleasure to Welcome author Lynsay Sands to HJ!

Hi Lynsay and welcome to HJ! We’re so excited to chat with you about your new release, A Quick Bite!

Hello everyone… I hope you’re all staying safe and sane, and maybe even finding new and creative ways to have a little fun over the next few weeks! 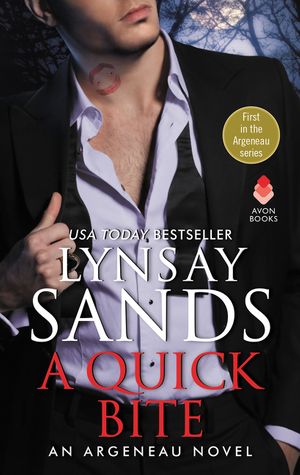 A is for Argeneau, the family name of our heroine Lissianna Argeneau.

Q is for quirky, which I think this story is
U is for unfortunate. Our heroine has a phobia to blood which is most unfortunate when you are an immortal and need blood to survive.
I is for inability. Lissianna has the inability to feed herself bagged blood and has to depend on others to feed her like a baby bird. Which means that at two hundred years old, she is still living at home and dependent on others.
C is for consciousness which Lissianna loses at the sight of blood whether bagged or not.
K is for Keen. Our heroine is keen to become less dependent on others for her survival.

B is for Birthday. Our heroine’s mother, Marguerite, has a special birthday gift she hopes will help Lissianna with her issues.
I is for Independence. Both Lissianna and her mother hope this birthday gift can give Lissianna her independence.
T is for Therapist. The gift is our hero Dr. Gregory Hewitt a therapist who specializes in dealing with phobias.
E is for Eager, which both our hero and heroine are when it comes to her therapy.

“Mmm. Your hair smells good.”
“Umm, gee, thanks, Bob.” Lissianna Argeneau peered around the dark parking lot they were crossing, relieved to see they were alone. “But do you think you could get your hand off my ass?”

Lissianna Argeneau has a big problem… she faints at the sight of blood. Not exactly the ideal phobia considering she needs it to survive. To get around her hemophobia Marguerite had to feed her intravenously, but after her father died the fear of being completely dependent on someone else to survive drove Lissianna to fend for herself via mortal donors. However, finding and feeding off donors is far more dangerous than feeding off bagged blood, and her friends and family are concerned she’s putting herself at undue risk. But Marguerite has come up with a plan to solve this problem for her daughter, one that involves enlisting the aid of a psychologist who specializes in phobias. This plan ends up with Dr. Gregory Hewitt finding himself staked out and tied to Lissianna’s bed slave.

Until recently, Greg Hewitt had always considered himself to be a rational person. He’d never walk up to a stranger’s car, climb in and pull the trunk door closed on himself, right? That would be pretty dumb. But then to calmly get out of said trunk and follow the driver into their house, up to this room, climb onto the bed and splay himself out to facilitate their tying him down was downright crazy. The mere fact that he had momentarily lost his faculties was bad, but things get worse when his kidnapper reveals he’s going to be a “birthday gift” for her daughter. His immediate thought is she intends him to be some kind of kinky sex slave, which is a very distressing possibility . . . right up until the moment he meets the birthday girl. Then he finds he doesn’t mind as much as he first thought he would.

For Greg it’s pure and simple lust at first, but he soon finds himself drawn to Lissianna’s open, attentive and thoughtful nature. He admires her determination to overcome her phobia, and the courage it took for her to defy both her mother and Lucian in order to keep Greg safe.

Lissianna is instantly attracted to Greg as well, but quickly comes to admire his kindness, generosity and the incredible patience he shows in the face of basically being kidnapped. Even though he was tied up and restrained for hours on a few occasions, Greg never lost his temper.

Over two hundred years old, and I never realized the finger could be an erogenous zone, Lissianna thought faintly, as the fire smoldering in his eyes now began to grow inside her, but much farther south.
Gregory Hewitt was a dangerously distracting man, and she decided it might be best to regain control of the situation. With that intention, Lissianna slowly withdrew her finger from his mouth, then leaned forward to rub her cheek briefly against his so that she could inhale the smell of him. The action had been an instinctive one, a predator testing her prey’s scent. His was a spicy, dusky aroma that she quite liked. Lissianna smiled faintly then brushed her lips against his cheek before trailing them across to his lips. She pressed them there a little more firmly and rubbed them gently back and forth.
Gregory Hewitt’s lips appeared firm and hard, but they felt soft. Lissianna continued simply to rub her lips gently over his, enjoying the erotic caress, until he raised his own head in an effort to deepen the kiss. When she felt his tongue slip out to run lightly along the crease where her lips met, she let them slip open. Her eyes widened with surprise at the sensations that assailed her as he slipped inside.
Lissianna had certainly been kissed over the last two hundred years — many times, countless times even if she were to be honest. Some kisses had been welcomed and some stolen, some enjoyed and some not, but this kiss…
His tongue was warm, wet, and firm as it rasped across hers. He tasted of mint and coffee and something else she couldn’t immediately identify, then Lissianna simply couldn’t be bothered to. She let her eyes drift closed and lost herself in the sensations overwhelming her.

The scene where Lissianna is caught red-handed… or I guess “red-fanged” in this case. She’s surprised to find an agitated man tied to her bed with a bow around his neck. Obviously intended as a birthday gift, she decides to sooth Dr. Gregory Hewitt when he begins to get agitated. Her soothing leads to kissing, which leads to biting, at which point they’re caught by Marguerite and Thomas.
This scene shows the chemistry between Lissianna and Greg, and reveals some pretty funny family dynamics between Marguerite, Lissianna and Thomas, not to mention some incredulity on Greg’s part as he witnesses their weird interaction.

Teeth retracting, Lissianna pulled free of Greg Hewitt’s neck and glanced guiltily over her shoulder. The sight of Thomas and her mother staring at her wide-eyed from the doorway was enough to make her stand quickly, her hands moving to straighten her clothes and hair.
“I cannot believe this!” Marguerite stomped into the room. “Sneaking around and unwrapping your gifts before your birthday like you’re twelve instead of two hundred! What were you thinking?”
“Well, technically, it is her birthday, Aunt Marguerite,” Thomas pointed out as he closed the door.
Lissianna tossed her cousin a grateful smile, but said, “I wasn’t sneaking around. I came up to get fresh stockings.” She scooped them up off the bed, and added, “And I didn’t unwrap him.”
Marguerite stared pointedly at the floor.
After glancing down to see the untied bow lying forgotten there, Lissianna grimaced, and admitted, “Okay, I did unwrap him, but only because he was upset, and I hated to leave him distressed.” She paused, then tilted her head, and said, “I take it Bastien’s arrival interrupted you before you could put the full whammy on him? He was upset about being kidnapped and wanted to be untied when I got here.”
“I didn’t kidnap him,” Marguerite said with affront, then peered past Lissianna to Dr. Gregory Hewitt to say, “I didn’t kidnap you. I borrowed you.” She turned her attention back to Lissianna to add, “And I did put the full whammy on him.”
“Really?” Her eyebrows rose in surprise, and Lissianna glanced from her mother to the man in the bed with confusion. “It doesn’t appear to have taken.”
Marguerite sighed, some of her tension leaving. “Yes, well he appears to have a strong mind.”

I’d tell them both the same thing…their lives would be a lot easier if they opened themselves up to new possibilities and understood that no matter how much they try, they cannot control everything.

I just handed in the next Highland Brides story. Many of you have asked for it and it’s finally here…Rory Buchanan got his story. And I think this story contains the largest subset of secondary characters yet, it involves an entire town!
I’m currently working on the next Argeneau after Immortal Angel. I won’t go into any details on who it’s about yet (no jinxes!) but I will say it has a kick ass heroine.

As for new and upcoming releases…

Love Is Blind, one of my older hysterical historicals, will be reissued on June 30th.

The next chapter in the Argeneau series, Immortal Angel, will be released in September. This book’s about everyone’s favorite mortal, G.G., and Vasco’s boldest and angriest crew member from Vampires Like It Hot, Ildaria.

The next Highland Brides story, tentatively called Highland Treasure, does not have an official release date as of yet.

To enter Giveaway: Please complete the Rafflecopter form and Post a comment to this Q: If your next birthday present shows up in a very sexy human form, wrapped up and tied down, would you take advantage of him?

Excerpt from A Quick Bite:

Lissianna has been spending her centuries pining for Mr. Right, not just a quick snack, and this sexy guy she finds in her bed looks like he might be a candidate. But there’s another, more pressing issue: her tendency to faint at the sight of blood . . . an especially annoying quirk for a vampire. Of course, it doesn’t hurt that this man has a delicious-looking neck. What kind of cold-blooded vampire woman could resist a bite of that?

Dr. Gregory Hewitt recovers from the shock of waking up in a stranger’s bedroom pretty quickly—once he sees a gorgeous woman about to treat him to a wild night of passion. But is it possible for the good doctor to find true love with a vampire vixen, or will he be just a good meal? That’s a question Dr. Greg might be willing to sink his teeth into . . . if he can just get Lissianna to bite.
Book Links: Amazon | B& N | iTunes | Google |

My name is Lynsay Sands and I’m the author of the Argeneau series and many hysterical historicals (as my readers tend to call them). I have written sixty books and twelve anthologies, which probably tells you I really enjoy writing. I consider myself very lucky to have been able to make a career out of it.
Website | Facebook | Twitter | Instagram | Goodreads |

52 Responses to “Spotlight & Giveaway: A Quick Bite by Lynsay Sands”