Today it is my pleasure to Welcome author Heather Novak to HJ!

Hi Heather and welcome to HJ! We’re so excited to chat with you about your new release, Blood Thinners! 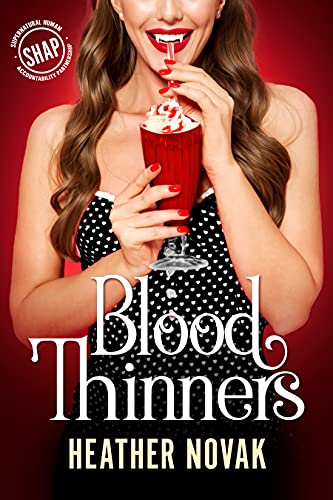 Blood Thinners is a laugh-out-loud yet deliciously dramatic romance about a supernatural investigator named Mina who has her life all planned out. She’s only one case away from getting her dream promotion. Everything spirals out of control when she falls for her mark, Carma.
It’s forbidden for an investigator to fraternize with their mark, but Mina’s plans to stay away are as insubstantial as her Titanic-obsessed ghost roommate when she’s forced to work closely with Carma. As things heat up between them, everything else falls apart. Mina’s forced to make the impossible choice between her dream job and protecting her dream woman.
I like to say it’s my beautiful, weird romance with gay ghosts, demons who love sweaters, and a mystery that keeps you flipping the pages.

Here are two of my favorite Mina moments:

– My plans to mope alone with a glass of wine were drowned out by the unmistakable sound of Celine Dion’s “My Heart Will Go On” echoing down the hallway. Ghosts were such assholes. I jammed the key into my lock and flung my door open. “My dudes!” I yelled over the noise as I walked in, dropping my take-out on the counter and kicking my shoes toward the garbage can. “What did I say about reenacting Titanic at full volume?”

– “You’re asking me something really important, but all I can think about is how you smell like strawberries and the way you bite your lip and how being around you actually makes me happy, and I can’t remember the last time I was happy. I can’t risk getting involved with someone I work with, but I swear to God, if I don’t kiss you right now, I will die.”

Blood Thinners started as a bunch of off-the-wall what-if questions between myself and my former coworkers. “If you had to drink one flavor of milkshake every day for your life, what would it be? What if everyone we worked with was secretly a ghost? Werewolf? Vampire? Shapeshifter? What if this company was a way to recruit new humans into their ranks and you were the only one who knew what was truly going on?”

A book idea formed and stayed with me through my health-related writing hiatus. Then a year later, with the help of a writing prompt from a friend in the Julie and the Phantoms fandom, I started writing again. The book poured out of me.

During my writing hiatus, I’d come out as bisexual, and I really wanted to incorporate positive bi rep into the book I was writing. I was also thrilled to include a character with a mobility aid after using them for years.

Mina and Carma constantly kept me on my toes. Carma came to me while I was watching Christine McConnell’s YouTube tutorials—she’s like a gothic Martha Stewart—and I thought that a character who could make super creative yet morbid things would be really fun. I wish I had half her talent. My crafts always turn out like a cat made them.

Mina is a cross between Juliet from Psych and Sarah from Chuck, who are two of my favorite characters from the early 2000s. Mina’s just a real badass with a soft spot and I really want her to be my best friend.

To help me understand my characters, I “interviewed” them. I wrote down their most life-changing events, as well as what they would change about their future if they could, and then made a list of their favorite and least favorite things. (Mina is very strongly opposed to cucumbers and Carma supports the use of the Oxford comma)

Mina’s ghost roommate Sebastian is an homage to my fictional true love, Sebastian from Devil In Winter by Lisa Kleypas. His best friend Reggie is a nod to Julie and the Phantoms.

My favorite was a family dinner with our main character Mina. She’s at her partner and best friend Jake’s childhood home, and we can really see how she fits into his family as another sibling. The conversation is between Mina, Jake, Jake’s stepmom Magnolia, and his stepsister Eliza.

“Why is my son giving you his ‘you’re in so much trouble when Magnolia leaves the table look?’”
“Am not!” he defended.
I laughed. “That’s his ‘this makes me very uncomfortable because I don’t like to talk work with my family’ look.”
“Not true. I’m just concerned about this entire mission. It’s…tricky.” He flinched. The word tricky was a mistake. I kicked him.
His stepmom folded her arms in front of her. “Tricky, how?”
He turned to face me with an exaggerated head movement. “Are you fielding this or am I?”
“I hate you,” I mumbled. I finished my wine before responding. “He’s just concerned because one of our marks is very attractive. He has it in his head I don’t know how to work with attractive people.”
My phone buzzed again and I pressed my palm to my pocket, wishing it would translate the message into Morse code. I’d learned Morse code for fun when I was eleven.
“So…who’s this attractive mark?” Magnolia asked.
I leaned my head back on my chair. “You did this,” I grumbled to Jake.
He ran his hand over his head. “It’s confidential.”
Magnolia raised an eyebrow.
I sighed. “Carma Nicks, daughter of the Lucinda Nicks.”
Eliza typed the name into her phone before whistling. “The daughter of the eighties exercise icon? Holy shit.”
“Language!” Magnolia warned. She held out her hand for Eliza’s phone and studied the screen for a moment, then looked directly at me. “I think you’re in trouble, dear.”

This is a spoiler scene so I’m going to be a bit vague. It was one of the very first scenes I had in my head and it still plays vividly in my mind. This is during the all-hope-is-lost moment when Mina’s life is falling apart. (I’ve removed spoilers from the excerpt)

I stood there, unable to do more than suck in sharp breaths through my nose as my fingers and toes went numb. I sank to my knees, unable to figure out how to keep standing. All the air in my lungs, the room, the planet, evaporated. I was drowning.
Sebastian’s words bounced around the room. Would you have altered your course? Yes, everything.
But even as I rolled over onto my back and stared up at the ceiling, I knew that wasn’t true. Because I would do it all again to go back to when I woke up in Carma’s arms. The moment I buried my face in her neck and knew I was home.
Right before it all burned to the ground.
Reggie walked through my door—literally—and laid down next to me.
I turned on my side to face him and burst out crying. The dam broke. Years of holding in stinging eyes and runny noses seemed to pour out.
Reggie, who had never seen me cry, ever, gasped and then tried to pat me. His ghost hands went right through. “Being dead es tan tonto.” He sighed in frustration and then started humming.
I nearly choked when I recognized the song. “My Heart Will Go On”?
“Sí.”
I rolled to my back and wiped my face off with my shirt. “You’re ridiculous.” “Just so.”

This book builds on my old releases (there are several fun easter eggs) but grew into something all its own. It definitely has my humor and a lot of paranormal fun, which is very on brand. Blood Thinners is an openly queer romance with a mystery element, which are both firsts for me.

I want readers to feel like my book is a safe space for them, especially if they’re LGBTQ+, use mobility aids, feel trapped in a life situation, or if their closest family is found family. I also want people to understand that using mobility aids doesn’t change a person’s worth nor does it make them unattractive or “less than.”

Also, my ARC readers are forming a fanclub for Belphegor, my sweater wearing demon. Maybe they take away a new favorite character, too.

I’m currently working on Dearly Departed, which is book three in the Love Me Dead series. This book will solve the mystery that’s been plaguing our team since Blood Thinners.

I’m gearing up to release Grim and Bear It, which is book two in the Love Me Dead series! This stars Mina’s partner Jake and his one true love, a grim reaper. There’s so much pining. The book drops June 6th and I absolutely cannot wait.

To enter Giveaway: Please complete the Rafflecopter form and Post a comment to this Q: Who would you prefer living with: A nosey ghost roommate who didn’t help with chores, a karaoke-loving werewolf roommate who shed a lot, or a surly vampire who was immaculately clean and promised not to drink your blood?

Supernatural investigator Mina Summers is only one undercover mission away from the promotion she’s worked for her entire career. Her assignment is simple: figure out why several unregistered vampires are going rogue—including one that ruined her best suit—and attacking humans. Her investigation leads her to Thinner, a new celebrity-endorsed weight loss company that’s shrouded in mystery and promises seemingly impossible results.

Mina’s convinced she’ll finish her mission in time for dinner, but when she face-plants into Carma Nicks, Thinner’s smart and sexy vice president, Mina’s suddenly out of her depth. Surely her heart is only racing due to adrenaline, right? Falling for—and sleeping with—a mark goes 100% against protocol, but Mina’s plans to keep her distance are as flimsy as the agency-issued ghost that resides in her apartment.

When Thinner’s secrets disrupt the peace between supernaturals and humans—and threaten Carma’s life—Mina’s forced to choose between protecting her dream career or saving the woman she loves.

When she’s not pretending to be a rock star with purple hair, award-winning author Heather Novak is crafting sex positive romance novels to make you swoon! After her rare disease tried to kill her, Heather mutated into a superhero whose greatest power is writing stories that you can’t put down.

Heather tries to save the world (like her late mom taught her) from her home near Detroit, Michigan, where she lives with Mr. Heather and a collection of musical instruments. She is part of the LGBTQ+ community and believes Black Lives Matter.
Website | Facebook | Twitter | Instagram | GoodReads |

« REVIEW: With Love from Rose Bend by Naima Simone
Spotlight & Giveaway: The Close-Up by Sarah Smith »